Before Lyn Hall ever became the mayor of Prince George, or a city councillor, or a school board trustee, he was a soccer dad. First and foremost that was his main role.
Oct 7, 2015 9:49 PM By: Andrea Johnson 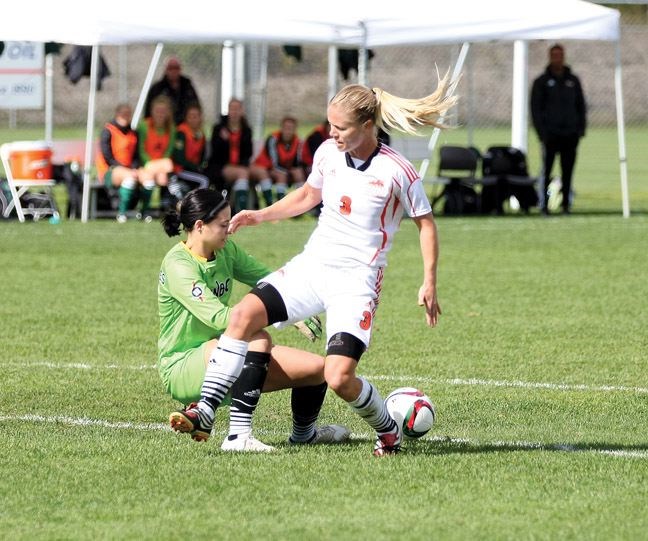 Before Lyn Hall ever became the mayor of Prince George, or a city councillor, or a school board trustee, he was a soccer dad.

First and foremost that was his main role.

Sixteen years ago, he stepped onto the soccer pitch to coach his six-year-old twin daughters Sydney and Jordan.

As they moved through the ranks of the Prince George Youth Soccer Association, he was not only their coach, but their sounding board and their biggest cheerleader.

When Sydney and Jordan turned 18 and moved on from playing youth soccer to the collegiate/university ranks at UNBC, Lyn stepped away from coaching and became their biggest fan.

For the last five seasons, Sydney, a starting midfielder/striker for UNBC, and Jordan, the Timberwolves' starting goalkeeper, have become key cogs in the lineup.

Sydney, the team's co-captain, has scored two of UNBC's four goals this year while Jordan has made 60 saves in eight games so far.

On Sunday afternoon, their parents - dad Lyn and mom Lorrelle - who've been there from the beginning, watched them for the final time at home at the North Cariboo Senior Soccer League fields.

With Jordan in net and Sydney out front, the Timberwolves played one of their best games of the season in a 0-0 draw against the University of Calgary Dinos.

The Timberwolves have six games remaining in their season, all on the road. And when the final whistle blows at the end of the game on Oct. 25 in Kamloops, it will signify the end of Jordan and Sydney's university soccer careers.

"We're going to go on the road with them and watch, but gosh, this is really, really tough," said Lyn Sunday at half-time. "I didn't think this would be that hard, but this has been our life as a family. We've traveled everywhere together and watched the girls through soccer achieve the opportunity to play CIS (Canadian Interuniversity Sport) and here we are. A half left at home and a few more games on the road."

Lyn and Lorrelle will travel to Edmonton this weekend when the Timberwolves take on the University of Alberta Pandas on Saturday and Sunday. They'll skip the trip to Saskatoon and Regina on Oct. 17 and 18, but will see their 22-year-old daughters play one last time against UBC Okanagan in Kelowna on Oct. 24 and on Oct. 25 against Thompson Rivers University.

Jordan and Sydney realize that while their playing careers are coming to an end, so is a unique chapter with their parents.

"He was our coach in PGYSA as well so it's a chapter of our parents lives coming to a close as well," said Sydney. "They watch everything of ours. When it's done for us, it's done for them as well. It's awesome they're going to be out on the road with us because it's what our family does.

"I think it will be harder for them," added Jordan. (Dad) coached us until (we were) 18. They're our biggest supporters. They're the ones we turn to when we're mad. We owe them that. I think we owe them a lot for how much they've done for us and getting us to the CIS level."

Lyn of course, is one proud dad and is amazed at how far his girls have come.

"I'm absolutely proud of what the girls have done," he said. "Both of them play in key positions - Jordan as the keeper and Sydney in centre-mid(field). I know it's dad speaking here, but they're exceptional players. It's really given me and my wife an opportunity to watch some exceptional soccer."

He said the twins kind of grew into the sport and Jordan "became a keeper sort of by mistake."

"I was coaching a team when they were about eight years old and we needed a keeper and in she went and she's been there ever since," he said. "She really turned it into something she became very, very good at.

"I think for us too, outside of soccer, this sport after all these years has really turned them into fine young women."

They've represented the city and the university, both in town and on the road.

"They need to take that very seriously," said Lyn.

Of course, twin siblings always seem to have a sixth sense and it comes in handy when Sydney and Jordan are on the pitch together. They can sense where each other is going to be.

"I think in a certain sense if (Jordan's) dropping the ball or she's taking a goal kick, she kind of looks for me and I can gauge her distance just by knowing her and picking up on how her game is going," said Sydney. "If her game is going really well, then I know where to position myself. If she's not having her best game in the world and vice-versa - if I'm not having my best game - she's the first person to pat me on the back and will be like 'Syd, I know you're better than that.' I'll be the first one to yell at her, like 'Jo I know you're better than that.'"

The twin sisterhood that his daughters share hit home for Lyn recently when Jordan wrote a post on Facebook about Sydney and their journey through soccer, not only through the PGYSA but through CIS.

"My wife and I got tears in our eyes," said Lyn. "It was Jordan talking about what her sister meant to her on the field and the camaraderie and the sisterhood. From a player perspective they're there for each other. They communicate so well. If you watch, there are times that absolutely amaze me they know where each other is without even looking. It's very neat.

"For them too, for any athlete, it's an opportunity to play in the best league in the country. As a soccer player that's what you strive for."

As for what the future holds for Sydney, who'll earn her business and marketing degree next spring, and Jordan, who'll graduate with her political science degree, they're not really sure yet. They'd like to stay involved in the game in some capacity.

They have to get through the remainder of the season and then the semester. And then another semester.

It hasn't really sunk in yet that they've played in front of their friends and family for the last time in their careers.

Yet soccer has brought them closer.

"I think it will sink in in the last game," said Sydney. "Playing with Jordan, I've always had someone to go through the ups and downs with and the lows and the highs. So it's nice to always have someone to turn to and to talk to.

"It's bittersweet," added Jordan. "I think because we ended at home on a pretty good note. It was a good weekend. Like Sydney said. It's pretty cool - not a lot of people can say they've played this long with their sister."

After watching them for so long as a parent, dad Lyn would like them to stay involved in some capacity.

"I've often wondered if they may take up coaching at some point down the road," he said. "Now that they'll have some time next year that will give them a chance to give back to the sport that's been pretty darn good to them. And they know a lot of the girls with PGYSA, so it'd be nice if they could find a role there."

- with files from Ted Clarke