The challenge of racing 715 kilometres in a canoe is not just the physical strain of paddling on a stretch of river that's about the same distance as traveling from Prince George to Prince Rupert.
Jun 24, 2016 9:56 PM By: Ted Clarke 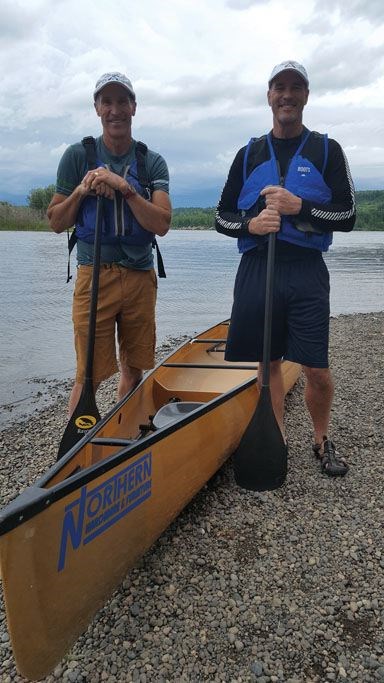 Pat Turner of Prince George, left, and his brother Tim, who lives in Africa, will be in Whitehorse on Wednesday to begin the 715-kilometre Yukon River Quest, the world's longest annual canoe race. Citizen staff photoCitizen file photo

The challenge of racing 715 kilometres in a canoe is not just the physical strain of paddling on a stretch of river that's about the same distance as traveling from Prince George to Prince Rupert.

For Pat Turner and his brother Tim, entered in next week's race from Whitehorse to Dawson City, they somehow have to conquer the slow torture of sitting for almost an entire 24-hour day on a hard plastic seat in a boat that can easily be tipped into frigid water.

The weather is unpredictable and there's a 120km crossing of Lebarge Lake which can turn into a nightmare if a howling wind churns up large waves that can easily swamp a boat.

Then there's the bug/bear factor. Mosquitoes and black flies grow thick and furious in Canada's north and the forests are loaded with bear and moose, which just adds to the fun of bathroom breaks. Paddlers are advised to carry bear spray and know how to use it.

It's no small task to navigate the mighty Yukon River successfully without getting lost or hung up. There are sandbars to avoid and side channels which lead to dead ends. Map-reading skills and familiarity with GPS devices are essential.

Dubbed the Race to the Midnight Sun, the event is geared to competitive racers intent on getting to the finish first as well as recreational paddlers who just want to finish it before the 11:50 p.m. cutoff on Saturday, July 2. Based on the racing backgrounds, the Turners have to be considered one of the favourites.

"We have four days to do it and we'd like to finish it in two."

The Turners have already proven themselves as world-class rowers, albeit racing in much shorter distances. Pat, 55, won Olympic gold in 1984 on Canada's eights rowing team. Tim, who turns 57 on July 5, finished seventh in the coxless fours event at the '84 Games in Los Angeles. In 1981, they won bronze in the fours competition at the world rowing championships in Munich. But Yukon River Quest is a completely different animal, the ultimate test of survival, and they both hope they are ready for it.

Last September, the Turner brothers, under the team name Cache Flash, won the tandem canoe (C2) class in the inaugural Muskoka River X Coureur des Bois, a 230km race in Algonquin provincial park in central Ontario. Tasked with the added burden of having to carry their boat through several portage sections, the race took them 22 hours 59 minutes - their longest race to date. Two half-days on water were broken up by a night camp-over.

Plourde and Brainard are among 100 entries this year in the 18th annual race, as are the Turners cousins, John Glynnmorris of Whitehorse and his brother Tristan, of Ottawa.

"This is our first time on the river and there are guys who have done this dozens of times so we want to hang with the guys who know the route - we'll let the known favourites show us the way," said Tim. "They will avoid the shallow water and sandbars, which can drive you crazy. The water is 5 C and you don't want to be walking in it."

The race starts at noon Wednesday in Whitehorse with a 200-metre dash to the river shore. The Turners plan to keep their feet dry to avoid the discomfort and increased hypothermia risk of having wet feet in the boat the entire day. If it gets wet inside, they will have sponges and a suction-equipped auto-bailer to drain water from the boat.

With Pat handling the bow and Tim in the stern, they'll each have food baskets stocked with boiled eggs and potatoes, apples and bananas, as well as energy gels, bars and drinks. They will also have a supply of caffeine products to stay awake and ibuprofen to help reduce the pain factor.

There is one mandatory seven-hour stop required halfway through at Carmacks. The faster paddlers will arrive there at midday on the second day to restock their food and water supplies and try to get some sleep in the campground while wearing eye shades.

A three-hour stop is required at the last of six checkpoints at Coffee Creek, two or three hours upstream from the confluence of the White River, where paddlers have to be especially alert mentally to get through a confusing maze of channels. The Turners will carry laminated maps and their GPS device to avoid taking the wrong route.

"There are probably 50 of those situations where if you're just guessing you'll get it right eight of 10 times just looking at the flow," said Tim. "But if you get it wrong, you end up in a complete disaster because there's no water there and you have to get out and start humping the boat."

There are two rapids section four hours from Carmacks which normally carry a Class 2 rating, but the Five Finger Rapids have five- or six-foot standing waves and can reach Class 3 in high water conditions.

"As you get more experienced you learn how to keep the boat afloat and maximize riding waves and not getting buffeted as much," said Pat. "Otherwise, you get wet, cold and miserable.

"There's the wear and tear of just sitting in that position for so long, the pain in the butt, the legs, the hamstrings and the lower back and having cold water on your hands."

Muscle strains are common and Pat says he won't forget to pack an anti-inflammatory cream.

The Turners grew up in Toronto and were introduced to paddling at a young age at their family cottage near Huntsville, Ont. Pat, an emergency doctor at UHNBC, moved in 2003 to Prince George, where he discovered an active marathon canoe community in the Two Rivers Canoe Club, which organizes events like the Northern Hardware canoe race on the Nechako and Fraser rivers in July.

Tim has a background in engineering and banking and has spent the last 20 years working for the African Development Bank in the Ivory Coast in west Africa. As the head of risk management, he oversees the financing of infrastructure projects all over the African continent. Based in the port city of Abidjan, where he had a Canadian-made Clipper canoe shipped to him, he trains on tidewater lagoons with young Africans, some of whom tried this year to qualify for the Rio Olympics in rowing.

"This will be the most physically demanding thing I've ever done in my life and I'm pretty apprehensive about this, but I know we'll get through it," said Tim. "The idea of being awake for 24 hours to do a physical activity is something I've never done.

"My biggest fear is cold, I've turned into a tropical (wimp)," he laughed. "If it gets cold and nasty, that will work against me, I'm not used to that. On our coldest day it might get down to 21 or 22 C. Apparently there's a huge temperature swing (in the Yukon) and it can go from 20 degrees in the day to near freezing at night. When your body temperature starts to go down and you're tired after 18 hours of non-stop paddling, some people get the chills."

The Yukon River flows mostly northward from Whitehorse and with the days at their longest this time of year it never gets totally dark at night. But by the end of the first day, visible light will be minimal from midnight to 4 a.m. and each boat must use a light to alert the safety boats and checkpoint observers. Further on in the race, by the second and third days, the night sky will be noticeably brighter.

All boats will have electronic SPOT trackers which track progress and are capable of sending distress signals if paddlers get into trouble and require a rescue, either by boat or helicopter. The tracker also allows friends and family members anywhere in the world to monitor the race on the website, yukonriverquest.com.