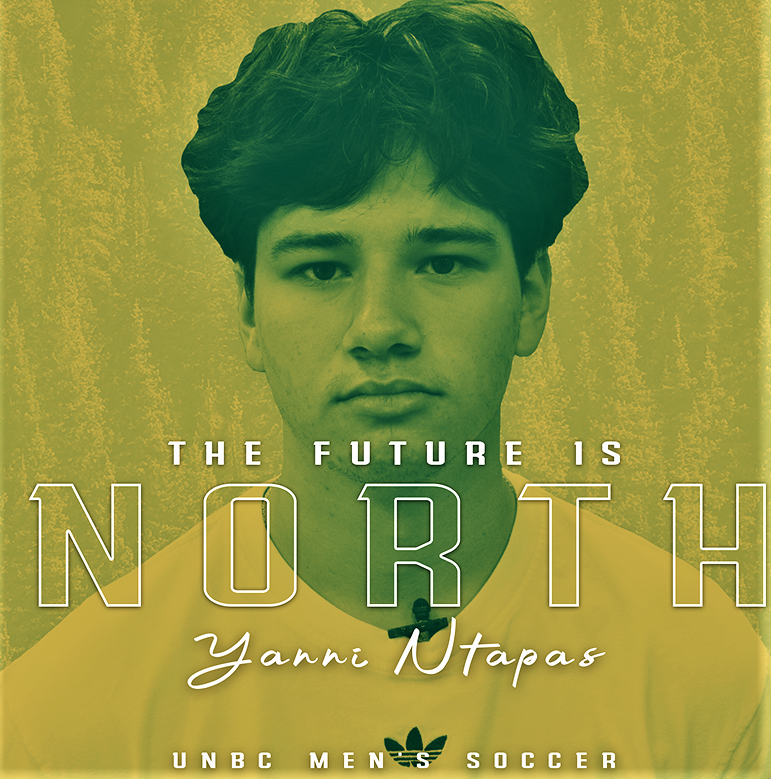 From Prince George Secondary School to the university campus on Cranbrook Hill, the UNBC men’s soccer team has utilized the local pipeline to solidify its future in net, officially announcing the commitment of Yanni Ntapas for the 2021-2022 Canada West season.

“It’s great. I have been wanting to do this for the past 12 years,” said Ntapas. “It is really great to get it in motion and be ready to play. I am ready to give it my all this year. I started talking to Steve (Simonson) at the beginning of the year and it has been going smoothly since there. Right when we connected, we clicked. It is going to be a great spot for me for the upcoming years.”

Standing five-foot-10, Ntapas is a combination of energy, personality, and technique. Growing up in northern BC, he attended Timberwolves games, realizing he wanted to play the game at the highest level in Canadian university sport. He joins a T-wolves program with a ton of young talent and he is confident his work ethic will aid him in the transition to the Canada West level in 2021 and beyond.

“I like that we are all young,” he said. “We are going to be ready to play, and everyone is ready to give it their all and try to win a championship here. The speed of play is definitely going to be a big factor, along with the physicality. It will take a couple months to get used to, but once we get used to it, we will be straight rolling from there.”

Ntapas took up the game at the age of four, but didn’t get between the pipes until a camp in Kelowna when he was 12 years old. He fell in love with the position and has been cultivating his skills and passion for the high-pressure role ever since.

“When I was younger, my Dad never let me play in goal as I was coming up at a young age,” said Ntapas. “Then, one day, I strapped the gloves on and fell in love with the position. I love yelling at everyone, so that’s good. I am very vocal, I have great shot-stopping ability, and my distribution is A-class, you could say.”

Ntapas has been playing in Kelowna since 2016, traveling with the Thompson Okanagan FC program, competing at the highest level of youth soccer in British Columbia. He points to his training under Kai Tolpinrud and Jason Thompson, as well as his work with PGYSA’s Terrol Russell, as major factors in his development.

His Prince George roots always made the Timberwolves an attractive destination, as he considered the next step in his soccer career. Ntapas and UNBC coach Simonson connected last year, and a mutual interest was formed. The T-wolves bench boss is thrilled to welcome a competitor like Ntapas to the program moving forward.

“We are excited to have Yanni commit to our program for the fall. I have known him for a few years now and have kept an eye on his soccer journey,” said Simonson. “I know he is a committed young man, and he was focused on making the jump to university soccer. I really think he will be a positive addition to the program. We are excited to see him in preseason and watch him thrive in the UNBC environment.”

The 17-year-old will graduate from PGSS this June before joining his new teammates for training camp in August. The FTF Canada 2020 Men’s Combine Goalkeeper MVP plans to study psychology at UNBC, where he will get to play the game he loves in front of his friends and family, in the town he calls home.