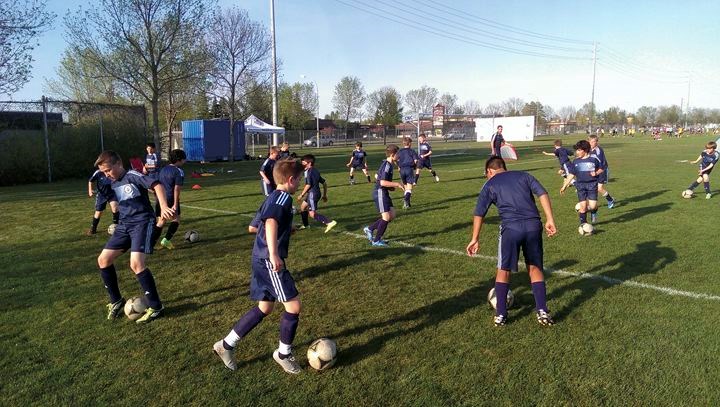 The under-12 pre-prospects boys in the Vancouver Whitecaps Northern Academy know the drill as they go through a warm-up activity under the watchful eye of coach Ross Holtom during their training session Wednesday night at Rotary Field.Citizen photo by Ted Clarke

Carson Briere is only 11 and it's far too early to tell if he has what it takes to follow a path to the pros in Major League Soccer.

One thing is for certain. On May 30 at B.C. Place Stadium in Vancouver, he's got a standing invitation to join the Vancouver Whitecaps at field level when they prepare to square off for an MLS game against Real Salt Lake.

Now in his third year of training the Whitecaps' way at their Northern Academy in Prince George, Briere has been selected as part of a group of 70 local players to be a part of a two-day training camp in Vancouver, May 29-30.

The kids will have three training sessions over two days with Whitecaps first team staff, they'll get to meet some of the players, then go to the MLS game. Briere went on the trip to Vancouver last year and he knows what he's in for.

"It was fun getting to play with all the old players of the Whitecaps and the coaches," said Briere, a Grade 5 student at Heather Park elementary school. "It's cool going to the Whitecaps game."

This is his seventh season of soccer and he also plays hockey. After a winter training indoors with the Whitecaps academy at the Northern Sport Centre, he's in great shape.

"It's fun and good training and I like the games," Briere said. "Normally we train first and then have mini-games after."

He trains in a group of 16 of his age-group peers, all of whom have been selected for the Whitecaps pre-prospects program. Craig Briere, Carson's father, can see the improvement and says his oldest son is thriving under Northern Academy coaches Ross Holtom and Sonny Pawar.

"The best thing he receives out of it is exceptional coaching," said Craig Briere. "What I really enjoy about it is they teach the kids things like proper manners, proper etiquette, things you might not receive in a sports setting.

"The whole approach the Whitecaps have to it is a very professional club-like environment that's unique in the north. The Whitecaps are the premier soccer organization in western Canada, if not Canada, and to be able to have them participating and giving our kids this opportunity is something we typically don't see in Prince George and the north."

In the tradition of the Prince George Youth Soccer Association Pro Touch Soccer Academy introduced nearly a decade ago, the Whitecaps program Pawar started teaching two years ago encourages youth players to have a ball on their feet as much as possible during the drills so they develop a feel for the game at an early age.

"They played a lot of indoor soccer over the winter and they can handle the ball - you can see they've got great training mentality and have the right attitude and commitment level to improve in soccer," said Holtom. "We're trying to make it so we get the best kids in Prince George so we can develop them. In the future it might be able to work at the lower level so we can work with the players coming through to try to put them into the top-level."

The Northern Academy also has branches in Quesnel and Williams Lake. The same drills and same methods of teaching are used in the other Whitecaps regional academies in Vancouver, Nanaimo, Vernon, Nelson and Saskatoon. The goal is to establish a clear pathway for kids to follow, from the Whitecaps' regional academies to the residency program and, ultimately, the first team.

Holtom, who shares the Northern Academy head coaching duties with Pawar, taught the Whitecaps summer academy programs in the Okanagan while he was still working in his native England with the Wolverhampton Wanderers academy program. He moved to Prince George last August.

In Prince George, there are 70 boys and 62 girls involved. The under-12 male and female players (pre-prospects) train in 90-minute sessions separated according to age and gender on Mondays and Wednesdays, while the 13- to 18-year-olds (prospects) are on the field Tuesdays and Thursdays. Each session begins with a warmup game, followed by training activities to work specific skills, followed by a small-a-side game.

"You'll start to see the benefits of the technical training that's going at these ages in a couple of years," said Pawar. "There are several players locally and abroad who are playing university (soccer) and are doing extremely well and that comes from having a solid technical base that we're proud enough to say that we had something to do with. This level of soccer for the committed and keen player has been around for a number of years now and we are seeing the benefits of it."