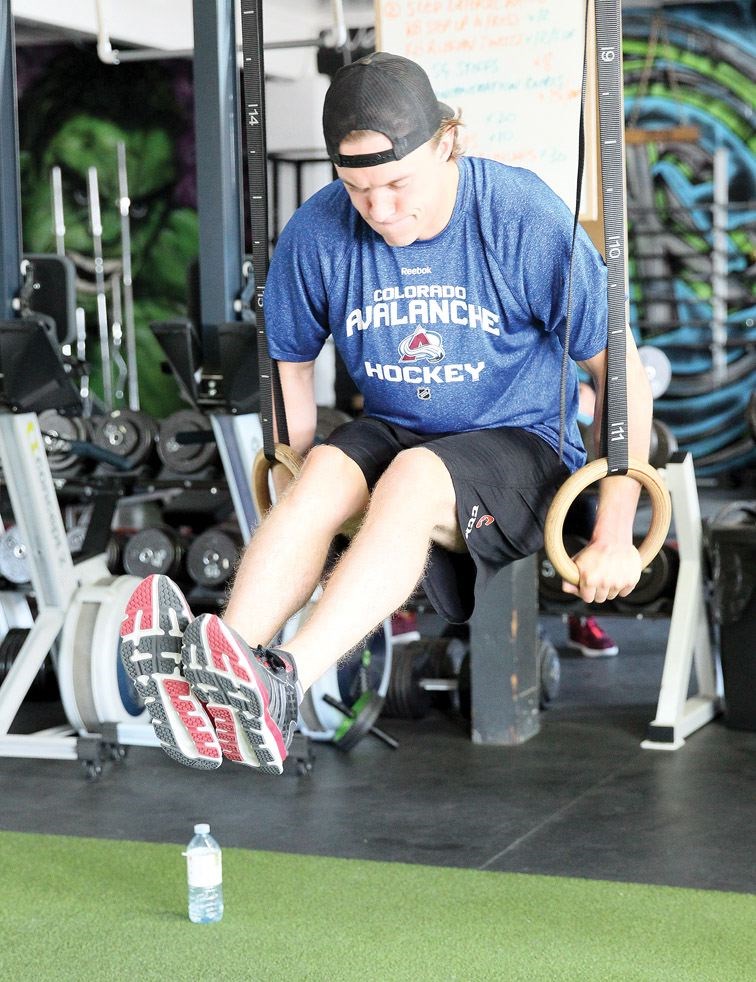 Prince George Cougars forward Brogan OBrien puts in a workout in June at Xconditioning. The Cougars and Xconditioning have teamed up to provide elite level hockey specific training to prepare players for the upcoming season.JAMES DOYLE, Photographer

Brogan O'Brien knows the situation all too well.

As one of seven Prince George Cougars players entering the season as 20-year-olds, the numbers dictate that only three of them will get the chance to finish out their junior hockey careers with the Cats.

What separates O'Brien from the other six overagers is his birthplace. He's a born-and-bred Prince George boy who has played all of his hockey in the city and he would rather remain in Cougarville.

"It's definitely nice to stay at home, my family gets to watch me all the time and it's always a great experience to play for your hometown team and I'm really proud of that," said O'Brien.

"I've been playing with these guys for a couple of years and we're really close and really good friends and it's going to be tough to see one or two of us go. It's a friendly competition and hopefully it works out in the end. No doubt that everybody here can play on some team in this league.

"It's always been a goal of mine to do the best I can and make sure I play hard and I'm really happy I got to play all my career here. Hopefully it stays that way."

O'Brien has grown up under the spotlight of playing for the city's highest-profile hockey teams. Before he joined the Cougars he spent two seasons in the B.C. Hockey League with the Spruce Kings.

In his two WHL seasons, O'Brien has established himself as a solid two-way centre who uses his six-foot-three, 200-pound frame to create space for himself and take the punishment that comes with hanging around the crease. His above-average one-on-one puckhandling skills, his ability to win face-offs and his success at deking goalies to finish off breakaways add to his value.

"He's a very skilled offensive guy and he's showed what he can do and I think more can happen with him this year as a 20-year-old," said Cougars general manager Todd Harkins. "He's just going to have more confidence and he will be a leader."

O'Brien's point production tailed off considerably last season - from 18 goals and 56 points in 71 games in 2015-16 to nine goals and 33 points in 70 games last season. His numbers as an 18-year-old earned him a tryout with the Colorado Avalanche a year ago and he's hoping that door to the NHL opens for him again.

"I'm looking to have good year, wherever I end up, and hopefully I'll get attention from somewhere and try to play pro," O'Brien said.

"(The Colorado camp) was a great experience, you kind get a taste of what it takes to get to the next level and what you have to work on to get there. I've think grown in a lot of areas, I've grown up a lot, and my leadership (ability) has gone up a lot. I used to be pretty quiet in the room and now I try to talk as much as I can to be a role model for the younger guys.

"It's hard game to play and I think maturity comes a long way with it along with your size and strength, it helps a lot. I've tried to up my physical game as much as I could in the last two years to make it part of my game and have a more complete role."

If he does stick around with the team, O'Brien says Cougar fans have much to look forward to watching this year's much younger edition reload and try to repeat as B.C. Division champions.

"I think we're going to be a real hardworking team this year and we'll be better than a lot of people think, and I'm looking forward to it," he said. "I just want to be a leader and always bear down to produce as much as I can."

The Cougars have three other forwards - Jared Bethune, Aaron Boyd and Radovan Bondra - in the mix, with defencemen Tate Olson and Shane Collins and goalie Brock Hamm also still on the roster as 20-year-olds.

They also have three Europeans forwards - Bondra, Nikita Popugaev and Vladislav Mikhalchuk - with only two import positions allotted to each team. The Cougars aren't likely to have one player take up a 20-year-old spot and play as an import, which means Bondra, a native of Slovakia who is still with Chicago Blackhawks, is virtually certain to be traded.

The Cougars have until Oct. 15 to declare their 20-year-old players. They can carry as many as four 20-year-old on the opening day of the season next Friday but can only dress three. Heading into their final preseason game this Friday at CN Centre against the Kamloops Blazers the Cats still have 34 players in camp. By Oct. 10, teams are required to reduce their rosters to a maximum of 25 players.