NHL official talks about career while in town for skating school

Vaughan Rody didn't make it as a pro hockey player but he's carved out a career as a linesman for 785 NHL games over 15 seasons. That's a lot of time living out of a suitcase for the 46-year-old Winnipeg native.
Aug 19, 2015 9:35 PM By: Ted Clarke 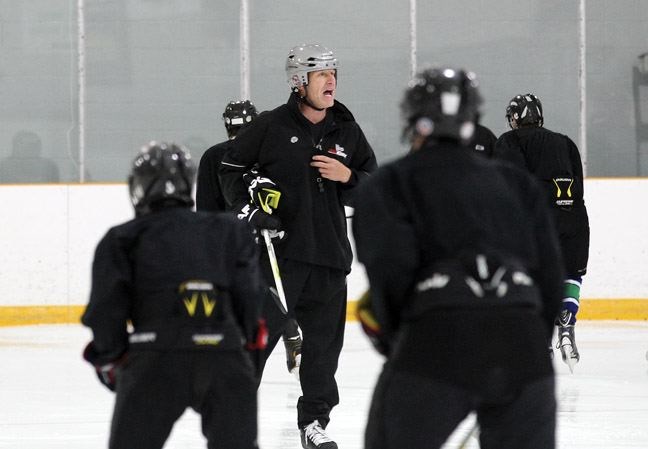 Vaughan Rody didn't make it as a pro hockey player but he's carved out a career as a linesman for 785 NHL games over 15 seasons.

That's a lot of time living out of a suitcase for the 46-year-old Winnipeg native. But, he takes good care of himself, knowing his job requires he keep up with the play, making sure NHLers don't cross any lines while playing one of the fastest sports on Earth.

A back injury he suffered in an on-ice player altercation required surgery to fuse two discs and that limited Rody to 28 games last season. But he's maintained his fitness and is back on blades, healthy enough to return to his off-season passion - teaching kids in his Pro Edge Power Skating and Hockey Skills school.

The two-day Prince George camp at the Elksentre included five hours of instruction on the ice and two hours of dryland training sessions for 37 players in two age groups: under-12 and under-16. The on-ice sessions focused mainly of skating skills and how to use blade edges to maintain balance and create speed and agility. Pucks and hockey strategies were introduced later in the weekend. Hockey is all about skating and as a linesman Rody has to be swift on his feet.

"We're trying to teach some kids the difference between being good and being great," he said. "Skating takes forever to learn how to do it right, and if we can teach them at six we won't have to be teaching them at 14 or 15. If we can create some good habits now, hopefully it elongates their career.

"We have to get the basics down first and what happens if you throw a puck on the ice, that's where everybody's attention goes to and they forget about what they're supposed to do. There's five basics of skating - there's proper arm movement, there's an elongation of stride, there's good core strength and a knee bend, and a toe flick at the end, and the bottom line is they need to be fit. If they're not fit, they're just not going to play."

Rody moved to Seattle when he was a WHL linesman and makes his home at Lake Stevens, Wash., close to his wife's family roots. He started out at age 14 working games for six- and seven-year-olds and quickly climbed the ranks. He spent four full seasons in the WHL and is now one of 66 active NHL linesmen.

"I realized I wasn't going to make it anywhere as a player and thought maybe I could remain involved in the game somehow," Rody said. "It's a long process, playing and refereeing are completely different. When you're playing you're so puck-focused and when you're officiating you're not puck-focused because 75 per cent of the penalties happen away from the puck."

Acting on the advice of his father, Rody has always been a linesman. Back when he was breaking into the league the two-referee system did not exist. There was just one referee and two linesmen and choosing to line doubled his odds of making it in the pros.

"You never switch, you get hired as one or the other and if I wanted to go back to being a referee I'd have to get out of the NHL and go back to the American League and take a couple hundred thousand dollar pay cut and work my way back to the NHL."

For aspiring NHL officials, he said the best thing they can do is play hockey as long as they can.

"Play the game and learn the game and understand the tendencies when somebody comes on the ice and there's a separation of goals by two or more in the last three minutes that there could be some problems," Rody said.

He also has words of advice for parents when they overstep their boundaries and become too vocal in their criticisms of young officials at minor hockey games.

"We do a lot of (officiating) clinics for young kids and the toughest part of it is when parents become financially involved. When you're financially involved you look at this game differently and you look at these people as the enemy, and they're not," he said. "They're out there trying to do the best job. They're not trying to oust anybody, they're just trying to make it fair and do their best for $16 or $18 a game."