Never too old for golf

Delmar Lamb warmed up for his game of golf Thursday in a way very few golfers can. He had a putting contest with his great-grandchildren.
Aug 1, 2014 5:43 AM By: Ted Clarke 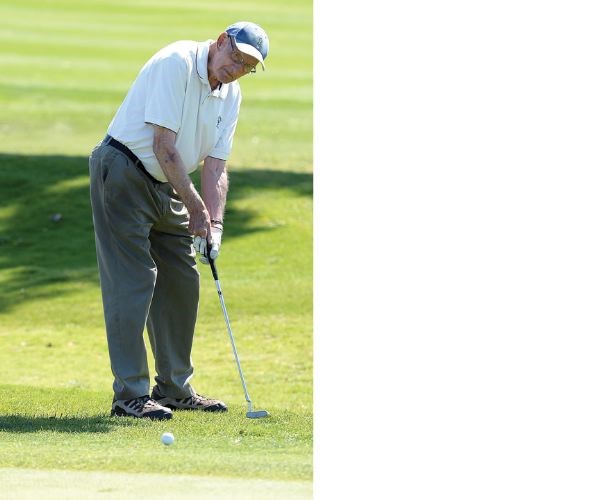 Delamar Lamb, 95, believed to be the oldest golfer in Prince George, makes a chip onto the first hole at PG Golf and Curling club Thursday.Citizen photo by Brent Braaten

Delmar Lamb warmed up for his game of golf Thursday in a way very few golfers can.

He had a putting contest with his great-grandchildren.

"Holy Gosh Joel, you just about made a 20-footer there," said Lamb, watching 10-year-old Joel Cunningham just about find the hole on the putting practice green at the Prince George Golf and Curling Club.

You'd never know it watching him with a club in his hands. You won't see him boom a drive 300 yards down the fairway but more often than not he hits the ball straight, and he's downright deadly hitting out of a sandtrap.

Four months shy of his 96th birthday, compared to his other family members, he refers to himself as "the oldest living Lamb on record." He still drives a car, lives alone in his own house on the Nechako River, and does his own cleaning and cooking.

"I can boil water but not much else," he quipped.

Lamb started golfing in 1971. He didn't play in 1999, the year his wife Ethel died of cancer, and he was sidelined last year when arthritis affected his logger's grip and he couldn't hold onto his clubs.

"I thought my golfing days were over," he said. But with treatment and time he's back in the swing of things, playing three times a week at the PGGCC.

Lamb got bitten by the golfing bug in a big way when he joined up with Saturday Morning Duffers in 1978, a group of 16 including Ivor Killy, Mark Thibodeau, Hub King, and former Citizen publisher Fred Chapman. They played religiously every Saturday.

"I was on probation for the first year and if anybody couldn't show they would phone me - it was a couple years before I got in as a full-fledged member," Lamb said. "We're down to 12 members now and I'm the only one left of that [original group].

For 17 years the same group headed south the Palm Springs for a couple months in the wintertime and they'd get out their wallets to play the same closest-to-the pin or longest-drive contests they had in Prince George.

Lamb walks the course most times but lately in the summer heat he's been using a cart to get him around the back nine. Back when he joined the club in 1949 for the princely sum of $25, the course had just nine holes and covered the territory now occupied by Pine Centre Mall. Lamb didn't golf then but joined so he could go curling. But with four kids to raise and a business to run, he didn't have much time for curling or golf.

Born in Dunrea, Man., a small town near Winnipeg in November 1918, Lamb moved when he was seven to Detroit, where his dad Walter managed a grocery store. At age 11, following the stock market crash, the family went to Saskatchewan to take on a homestead near Smeaton, northeast of Prince Albert. Walter sold the homestead in 1935 and they moved to Love (Siding), where Walter established W.L. Lamb and Sons Lumber Company.

The Lambs were neighbours of the Rustad lumber family in White Fox, and the Rustads later followed them to Prince George. That move became imminent in 1946 when the Saskatchewan government, the left-wing Cooperative Commonwealth Federation, established crippling marketing policies that chased sawmill operators out of the province.

"They set up a marketing board and you had to sell your timber to them at about two-thirds of what you got on the open market. If they caught you taking even one board home, they could cancel your timber license," said Lamb. "As a result, everybody I know just pulled out and left."

Walter Lamb bought property on the Nechako River near where Cottonwood Island Park now stands and with his sons Ira, Gordon, Bruce and Delmar, began operating the sawmill. Walter died a couple years later and the mill was renamed W.L. Lamb's Sons Lumber Company. The business was sold in the late '60s to Lakeland Mills.

On Thursday, Lamb got together with his granddaughter Lisa's husband, Scott Cunningham, and their 13-year-od son Corey for a round. For Corey, who took up golf last year, it was his first chance to golf with his great-grandfather, and he was loving it.

"He's sporty, he talks all about golf, it's unbelievable he's still golfing at 95," said Corey.

Lamb admitted he didn't have his A-game with him and said he hasn't been golfing very well lately.

"I was out yesterday on men's day and hurt my back," he said.

"I took a mighty swing and slipped and kind of wrenched my back, but I'm not using that for an excuse," he laughed.

Lamb is a little hard of hearing from all those years of working in sawmill but takes no medications and has had no major ailments. He enjoys his garden and tries to walk as much as he can. He has no cut and dried answer to the secret to a long life.

"I do a fair amount of walking behind the snowblower, we have a long lane," he said.

"You just have to keep at it."

Lisa is continually amazed by her grandfather.

"You kind of forget how old he is," she said. "I think I have an unrealistic view of the elderly because he's my example. He's just this awesome person who plays with my kids and is active and is so aware. He's just smart and he's in such great shape."