If Chicago Blackhawks defenceman Brandon Manning puts on a little weight this season he can pin the blame on his girlfriend Shea-Marie Glass.
Aug 23, 2018 10:13 PM By: Ted Clarke 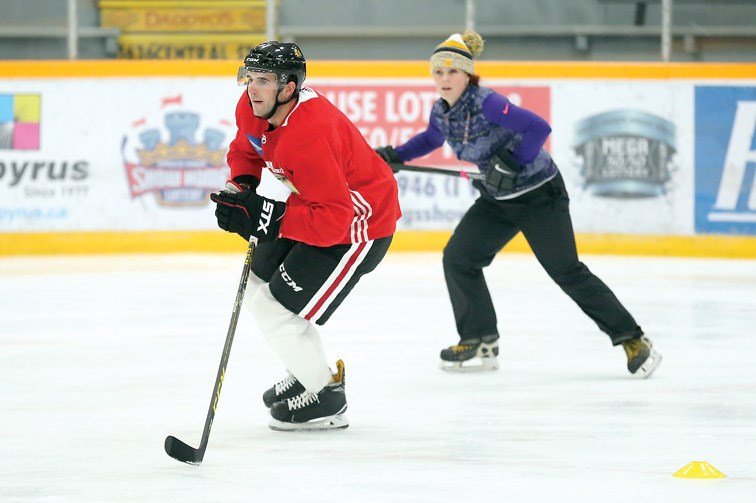 If Chicago Blackhawks defenceman Brandon Manning puts on a little weight this season he can pin the blame on his girlfriend Shea-Marie Glass.

In addition to being a whiz at accounting, she's a great cook, and that bodes well for Manning being well-fortified, especially during home-stands. Starting in October they'll be permanent roommates instead of being separated during hockey season, as they were the past four seasons while Manning was playing for the Philadelphia Flyers.

Manning was one of the Flyers' shutdown defencemen in their first-round playoff series last spring against the Pittsburgh Penguins and had the unenviable task of trying to stop the likes of Sidney Crosby and Evgeni Malkin from scoring. Coming off his most productive NHL season, with seven goals and 12 assists for 19 points in 65 games, the 28-year-old Prince George native signed with Chicago over the summer as a free agent and will be vying for a spot in the top-two defence pairings on a rebuilding Hawks team.

"It was kind of up and down at times but Dave (Flyers head coach Hakstol) was pretty good to me in Philly, I think he liked the way I play and helped me earn some more opportunities and some ice time and so far, talking to the guys in Chicago, it's going to be the same kind of thing," said Manning.

"I think they appreciate the way I play the game and that's what they're looking for. That makes it easy to just go in and play my game and do what I've done in the past. It's like anything - with time and opportunity you start to grow. Philly was great for me, I loved playing there and being a Flyer and I think I'm going to like being a Blackhawk just as much."

The six-foot-one, 205-pound Manning has a reputation as a hard-hitting, shot-blocking defenceman with above-average puck possession skills. He also has a bit of a mean streak in him. Before he became a Flyer regular he had 231 penalty minutes in the 2013-14 season while in the AHL with Lehigh Valley and he's not afraid to drop the gloves. Last year he was involved in four fights, down from nine the previous season.

As his father Leroy once said, "Brandon likes to fight but he's not that good at it."

"It's something I kind of learned that I had to do. In junior (with the Chilliwack Bruins and Prince George Spruce Kings) I wasn't a guy that was putting up a ton of goals or a ton of points until my last couple years so I had to play with an edge and had to learn how to fight a bit and stick up for my teammates and it's been no different in Philly, I've had to do the same thing. I got a bit of a reputation with it and that works for me.

"I wouldn't say I'm a big tough guy but it's part of who I am and I'm proud to go do that and be one of those guys. The way the game's trending, you don't see that a lot any more, but it's still an important part of the game."

Chicago has been one of the most successful NHL franchises in the past decade as Stanley Cup champions in 2010, 2013 and 2015. The team packs the United Center with crowds close to 20,000 each night and Manning has always liked playing there.

"The organization is probably one of the top ones out there and you can tell by the people that are involved there," said Manning. "On the ice, if you look at their core group you have guys who have won (the Stanley Cup) there, some world-class players, so to get an opportunity to play with those guys and maybe get an opportunity to play in the top-four and earn my way in there, I'm really looking forward to the chance."

At 28, Manning will be one of the senior defencemen on a roster that includes veterans Duncan Keith and Brent Seabrook, both 33; second-year Czech import Jan Rutta, 28; former Flyer Erik Gustafsson, 26; and 25-year-old Connor Murphy.

The Hawks finished last in the Central Division and in the two years prior to that suffered first-round playoff exits. Head coach Joel Quenneville, a former NHL defenceman, is back for his 11th season and is now the second winningest coach in NHL history. Ulf Samuelsson, once one of the most hated NHL players due to his punishing physical style, runs the defencemen.

The big question mark in Chicago is the health of goalie Corey Crawford, a two-time Stanley Cup champion with the Hawks, who missed the second half of the season with a concussion and was limited to just 28 games. They signed Cam Ward as a free agent from the Carolina Hurricanes but if Crawford can't play the Hawks could be hard-pressed to fill the void.

Manning has been working on power skating throughout the summer, focusing on edge control and balance drills with Northern B.C. Centre for Skating coach Andrea Ludditt, and he says he can see the improvement.

"The way the guys skate now, you have to be able to skate and I've worked on that a bit this summer and I've noticed a difference already," he said. "As a defenceman it takes a bit of time to pick your spots to jump into the rush or when to step up and hit guys and that was one of the toughest transitions, learning how to do that. You make the wrong decision and you're going to look stupid out there and skating is so important that if you don't keep up with that you won't be able to play."

Manning spends his off-season in Prince George, where he has a house and lakeside cabin at Ness Lake. His hockey roots in the city run deep. His grandfather, Leo, is a former Prince George Mohawk defenceman who starred with the senior team in the mid-'60s and Manning is cut from a similar cloth.

Manning signed a two-year deal with the Hawks that more than doubled his salary. He jumped from $975,000 with the Flyers last year to $2.25 million, for the next two seasons. But that raise came after years of entry-level contracts and dealing with injuries that hampered his progress. He had back surgery a couple years ago and says this is the best he's felt physically in a long time.

"Just the way I've come up, coming from Prince George and not getting drafted into the WHL or NHL and just having to work for everything, that's who I am off the ice and it's who I am on the ice," he said. "Coming back to P.G. keeps me humble with the good people that are here and I love spending my summer here.

"There's not one thing in my game I look at and say I'm here because of that, it's a combination of where I come from and who I am now. I'm proud of what I've done - four years in the American League and earning my way here."

Manning left for Philadelphia on Thursday and will move his possessions to Chicago over the next week. Training camp starts Sept. 14.