Patricia Miles may be spending the next two weeks on a soccer tour through Europe, but that doesn't mean the 17-year-old Grade 11 Kelly Road secondary student is letting her school work slide. She has calculus homework to stay on top of.
May 2, 2015 8:48 AM By: Andrea Johnson 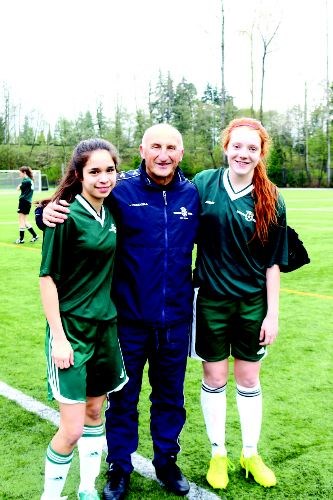 Patricia Miles may be spending the next two weeks on a soccer tour through Europe, but that doesn't mean the 17-year-old Grade 11 Kelly Road secondary student is letting her school work slide.

She has calculus homework to stay on top of.

Her Prince George teammate on the North Vancouver-based European Football School girls squad, Mitchell Redpath, will celebrate her 17th birthday during the side's stop in Belgium.

The pair of Prince George Youth Soccer Association under-17/18 Timberwolves are among a group of U16, U17 and U18 players from across the province suiting up for EFS, which leaves Tuesday on a two-week tour through Holland, Germany and Belgium.

"I'm pretty excited. It wasn't somewhere I thought I'd be going when I went to some of the EFS camps," said Miles, a midfielder. "Playing soccer over there will be really cool."

"It will definitely be a great experience playing soccer there," added Redpath, a Grade 11 PGSS student who'll suit up in the backfield as centre back.

They'll be put to the test against top-level talent, playing a total of six matches - two in Den Bosch, Holland, against FC Haarsteeg and Grongingen Cambuur, and two in Germany against Borussia Monchengladbach. The final two matches will be in Antwerp, Belgium.

Borussia Monchengladbach is one of the top teams in the German women's league.

Overseen by head coach Saibo Talic, the European Football School has been in existence since 2000. It focuses on developing the technical and tactical skills of male and female players, ages seven to 19, who go through the program.

More than 8,500 athletes have gone through the program at its year-round camps.

Talic first noticed Miles two years ago during an EFS spring camp in Quesnel. (EFS holds several camps outside the Lower Mainland in cities such as Salmon Arm, Kamloops and Squamish.) He noticed Redpath shortly after that and invited them to train with EFS in Vancouver, every second weekend.

"I saw the potential there," said Talic. "With Mitchell, she has excellent playing ability, speed and is mentally strong. She's so strong on her kicks and defending and passing the ball."

"I can see the whole field and control the game," said Redpath, who first tackled the sport in Grade 5. "It's a lot of pressure, but I like it."

On her PGYSA squad, Miles is usually in net as the goalkeeper. But Talic saw something else, that she can play on the entire pitch as an outside midfielder.

"She has great ability and speed and she has decent skill for that position," said Talic.

During this weekend's final training session in Vancouver before leaving for Holland on Tuesday, Talic will evaluate where each player will fit into the system. Each athlete will play two different positions.

"I'm pretty athletic and I like to play different positions," she said.

But besides the competition, the tour is also an educational one. Travelling by bus, they'll watch two high-level games in Holland and Belgium and they'll visit the Anne Frank House in Amsterdam.

"It's not just about soccer, it's also education and culture," said Talic. "All of our players will give their opponents a small gift from Vancouver and there will be some barbecues where they'll make some new friends."

Talic is impressed by the dedication of his players outside of Vancouver who have travelled for hours just to get to practice and training camps.

"The commitment of the players... I have huge admiration for them," he said.

"We're very dedicated, this trip is worth it," added Miles. "The girls on our team really get along."