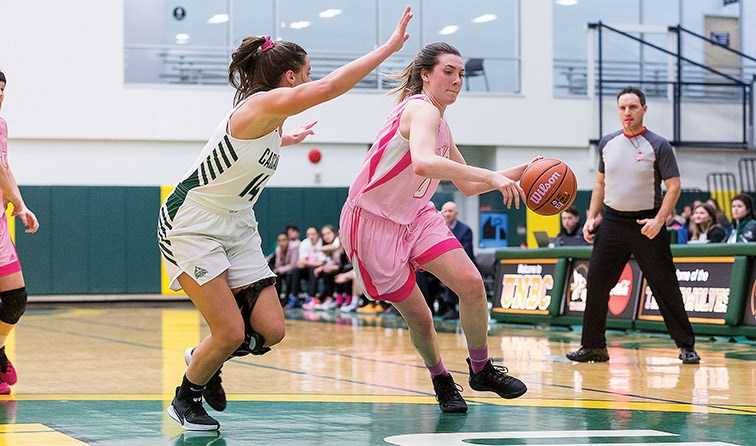 Madison Landry still has a few bruises on her body as reminders of what she and the rest of a small pack of UNBC Timberwolves have had to endure the past month as Canada West women's basketball contenders.

Considering what they've achieved over that time as winners of nine straight games, Landry wears those war wounds proudly.

Still basking in the afterglow of a gritty comeback double-overtime playoff win last weekend over the Lethbridge Pronghorns, the T-wolves head to Alberta intent on pulling off a monumental upset of the heavily-favoured University of Calgary Dinos when they clash in a quarterfinal Thursday.

UNBC came out of the Christmas break with a pair of losses to those same Dinos, losing 76-46 and 67-58, and after getting swept the following weekend against Fraser Valley Jan. 10-11 the T-wolves haven't lost a game. They're taken off on that nine-game streak despite a depleted roster that's left them with a bare minimum of reserves for the past month.

"Definitely we've been defying odds," said Landry, who in  Friday's back-and-forth 93-85 triumph in Lethbridge racked up a UNBC playoff-record 30 points, 22 of which came after the first half. "That win was unexpected just because our first half was really slow. Just our team unity and commitment and drive really gave us that win. We had the momentum at the right times. It was pretty special.

"Obviously both teams were very tired but we have been playing with six or seven people for the last few games and we just know how to play tired and I think that's what put us over the edge in the second overtime. We didn't want to play a third one and we just gave it all we got and our ability to stay unified when we're tired put us over the edge."

The T-wolves have lost four players to season-ending knee injuries. Two of them, forwards Cevanna Carlson and Alina Shakirova, got hurt in the second game of the Calgary series in January. Resigned to a cheerleading roles from the bench, those injured players and the encouragement of their coaches have helped the T-wolves keep their focus and stay out of foul trouble, knowing the alternative would prove disastrous.

"Everybody keeps giving us positive feedback and pushing us and there's no expectation for us to do good because of the odds," said Landry. "So even though we're playing with just six or seven there's three in the hole behind our backs and it's so helpful to have that positivity from the sidelines.

"We've been written off for the second half of the season and we've just shown up so I wouldn't be surprised if we have another upset. It's going to be a tough game but if the stars align for us I think we can pull out a win. They're not a WNBA team, we're in the same league as them and if we play our game it's not impossible for us to win."

The Dinos went 18-2 as regular-season champions. Both losses came in the second half of the season - 66-38 to Saskatchewan on Jan. 24 and 78-69 to Alberta on Feb. 1. Calgary has a deep roster with capable bench support for their most formidable weapons - third-year guard Liene Stalidzane, fourth-year wing Bobbi-Jo Colburn and fifth-years Erin McIntosh and Sasha Lightenwald.

"They have a lot of quick guards and they can all shoot," said Landry. "We just have to not let their ball pressure get into our heads because we know they're going to come out super-aggressive and if we can beat their press a few times up the floor they'll have to come off and if we have good all pressure on the way they won't be able to get on fire with their threes.

"We just have to be patient and play our game."

Landry averaged 19.1 points per game finished third in the scoring race behind teammate Maria Mongomo and Taylor Claggett of Fraser Valley. In her fourth season with the T-wolves, to try to take to fill the void left when post Vasiliki Louka graduated as the UNBC's all-time leading scorer, Landry was given free rein by coach Sergey Shchepotkin to utilize her speed and aggression to drive to the net and the 21-year-old Duchess Park graduate has been a deadly finisher all season.

"I know my team looks to me as a scorer," said Landry. "I knew with (Louka) gone I had to step up and Sergey has given me the green light to shoot and I'm allowed to look for my shot."

"That was the weekend we were most defying the odds - we didn't get in until 1 a.m. and we had six or seven (players)," said Landry. "I just think that Regina had written us off and when that happens that's when we are most dangerous. That was a really big sweep for us."

Key in the T-wolves' surge to the quarterfinals has been the play of forward Emma vanBruinessen, who came to UNBC this season after three years at the University of Alberta-Augustana. She averaged 10.5 rebounds (fifth in Canada West) in the season and was a force in the Lethbridge game with 15 boards and 14 points.

"She's been so consistent with being that extra player we really needed," said Landry. "We always look to her for her rebounds and points but also off the court she's such a huge help. Her energy on the bench, even though she only gets a minute on the bench a game, Sergey has to tell her to stop being so loud because she wants her to save her energy. She really has that fire in her belly and gives us that boost."

The game starts at 5 p.m. PT and will be streamed live on Canada West TV at cw.yaretv.com.

At stake is a berth in Friday's semifinal against the winner of the Fraser Valley Cascades-Alberta Pandas playoff, which follows the T-wolves-Dinos game on Thursday.