The St. Ann's Academy Crusaders of Kamloops desperately needed a goal with time running out in their 20-minute game against the Immaculate Conception Kodiaks of Prince George.
May 25, 2018 10:29 PM By: Ted Clarke 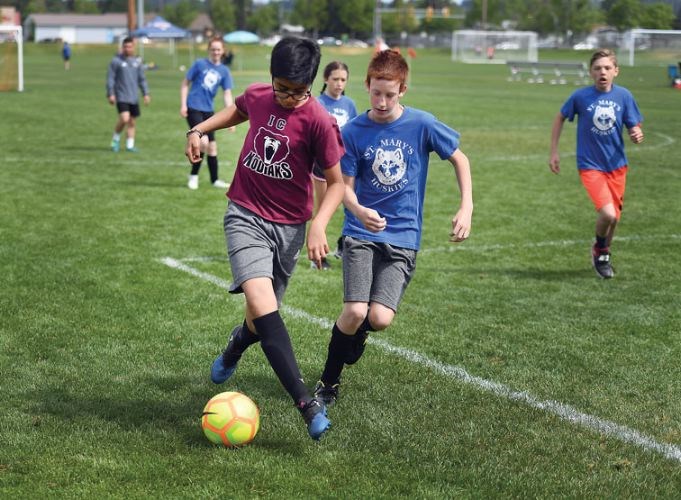 The St. Ann's Academy Crusaders of Kamloops desperately needed a goal with time running out in their 20-minute game against the Immaculate Conception Kodiaks of Prince George.

At stake was a chance to hoist the Terry Wilson Memorial trophy and bragging rights for a full year as Catholic elementary school soccer champions of north central B.C.

Matteo Cuzzetto was feeling the pressure, knowing there was only a couple minutes left in Friday's A Division final at Rotary Soccer Fields.

Towering over most of his players surrounding him as he nudged the ball with his foot in the tight confines of the mini-field, Cuzzetto got his boot into a low drive and it sailed into the net just inside the goalpost behind Kodiaks goalie Hayden Telford to make it a 1-1 game.

Soon after, the teams went right into shootout mode with no overtime and Sean Minhas and Jai Singh both made their shots count for Immaculate Conception, while Cuzzetto and Diego Topete countered with penalty strikes for St. Ann's. A window of opportunity opened for Crusaders shooter Sophia Greenridge when Trayecen Barth of the Kodiaks missed the net with a high shot and Greenridge sealed it with shot in over Telford's shoulder.

"We would have lost if I didn't score and that took us to penalty kicks, which we won," said the 13-year-old Cuzzetto, a soccer player since he was four. "Sophia and Diego scored too (in the shootout). They've both been playing soccer for a long time."

Barth opened the scoring late in the first half, sprung into the clear by a pass from teammate Cami Duchscherer, and he put the ball in off the hands of Topete, the St. Ann's goalie. In the shootout, Barth said his nerves got to him when he was asked to take the place of an injured teammate.

"I had to go in, so I got pretty nervous and I didn't score in the shootout, and now I regret it, but it was a good game," said Barth, who gave up minor soccer to focus more on basketball.

"It's good to play soccer in Terry's name and make new friends. We had a lasagna dinner (Thursday night) and got to do different activities with different people."

The 2-1 triumph for St. Ann's meant the Wilson trophy was going south to Kamloops for the first time in the eight-year history of the tournament. St. Ann's didn't take part in in 2017 but its two teams finished second and third in 2016.

Greenridge plays defence for the Kamloops under-13 girls team and doesn't get many chance to cash in on shootouts. But when her school team needed a decisive strike, her long soccer resume put her near the head of the line.

"It was really fun, I like playing with my school and being with them," Greenridge said. "I like this because otherwise they wouldn't really be known that they were good for soccer. I like seeing everyone come together to play from schools all around. We did some group activities and that was fun."

The Kodiaks were trying for their second win in the tournament. Immaculate Conception won it in 2015.

"We hoped to win because we got the first goal and we were trying to hold in to it, but they got the good shot and won it in penalty shots," said Kodiaks midfielder Levi Knezevic, whose team won three round-robin games and two playoff games to get to the final. "It was a lots of fun."

Twenty-one teams from 10 schools participated in the tournament, open to Grade 6 and 7 students. The event is a tribute to Wilson, a former Prince George Catholic elementary phys-ed teacher from Northern Ireland who helped form the Prince George Youth Soccer Association. Wilson died of brain cancer in 2010.

Telford, one of the tallest players on the field at five-foot-five, doesn't play organized community soccer. He's more into hockey and lacrosse. But his height and athleticism made him a natural choice to play goal for the tournament and he had the unenviable task of trying to fill all that net to make the saves with the Crusaders shooters teeing off from less than 10 metres away.

"It was pretty nerve-wracking in the shootout," Telford said. "I don't play soccer, but this was pretty fun, it's a good environment. I played in it last year and we didn't really come close."

In other tournament results, in the B Division final, St. Ann's No. 2 scored a 3-2 victory over Immaculate Conception No. 1, while in the C final, St. Joseph's of Smithers edged St. Mary's of Prince George 2-1.

Annunciation of Prince Rupert captured the Terry Wilson Spirit Trophy awarded to the most sportsmanlike team.

Wilson's former wife, Rebecca Gilbert, the principal at Sacred Heart school in Prince George, was on hand to present the tournament trophy to the Crusaders.

"Terry is smiling and loves it, I'm sure, from above," Gilbert said. "Soccer was his passion and he was a man of faith and Catholic schools were close to his heart. He would totally be part of this if he was here.

"It does my heart good just to know that someone like Terry brought everyone together for a day that's always amazing. It's great to have Kamloops with us and now they have the trophy so they'll have to come back."