Women's health a passion for one local volunteer

A local volunteer has been named a Heritage Hero by the national Look Good Feel Better organization that provides support to women and teens who are coping with the changes in their appearance due to cancer and its treatment.
Oct 20, 2017 9:26 AM By: Christine Hinzmann 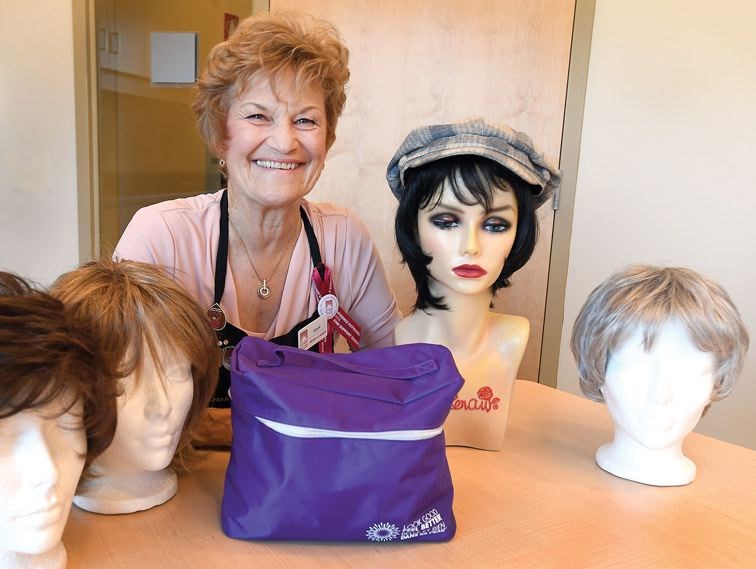 Gayle Magrath is a retired oncology nurse who has been supporting cancer patients with Look Good Feel Better workshops since 2003.Citizen photo by Brent Braaten

A local volunteer has been named a Heritage Hero by the national Look Good Feel Better organization that provides support to women and teens who are coping with the changes in their appearance due to cancer and its treatment.

Gayle Magrath is one of 25 honourees from across Canada as the organization celebrates its 25th anniversary. She said she is proud the Prince George team of volunteers has been recognized in this way.

Magrath started the Look Good Feel Better workshops in northern B.C. in 2003, the only program of its kind north of Kamloops. She sees clients coming from Prince Rupert, Williams Lake, Fort St. John and all points in between. About 50 people a year take the workshop held once a month. The space allows for up to seven participants where they are offered a Look Good Feel Better kit that includes $500 worth of skin care products. During the workshop cancer patients are instructed on how to care for their skin properly, while being offered tips and tricks on how to create eyebrows and eyelashes and have the option to be fitted for a wig and taught techniques on how to wrap a scarf around their heads.

The old adage that says if you look good you feel good comes into play within the program.

Magrath, a retired oncology nurse, first heard about the program when it was only available in the United States. Magrath worked as an emergency department and intensive care unit nurse and then followed her heart to oncology. Magrath has always been people oriented.

"This is one of my passions," Magrath said. "I have always been interested in helping women - to help them feel better even before I knew about the program."

Magrath worked in Prince George's small chemotherapy unit from 1983 to 2005 and had wigs, hats and scarves available for those women undergoing treatment.

"It was to empower them, give them back some control so they could feel like themselves again," Magrath said. "So I had already been doing that and then I heard about Look Good Feel Better and I thought wow, we've got this in Canada now."

Magrath, facilitator of the group, said Linda Schwarz was key to bringing it all together, as she was a Mary Kay representative that had the makeup-artistry talent.

"We approached the organization to start our own chapter here and it all flowed from there," Magrath said.

Volunteers are trained makeup artists or people who have experience in the industry and there are 14 in Prince George from Mary Kay and Shoppers Drug Mart that work one-on-one with participants during the workshops.

"They are the backbone of our team here," Magrath said.

Magrath has a long history of caring for people and trained to be a nurse at Royal Jubilee Hospital in Victoria, which is the cancer centre for Vancouver Island.

"So I trained with a lot of cancer patients and have been involved with the cancer society for 37 years," Magrath said. "I just found it a real privilege to be able to work in that field. And people always ask 'how can you work there?' Well, I just always had to have it clear in my head - are we trying to put them in permanent remission, are we helping them to reach a goal, like a birthday or wedding or are we going to help them live until they die - I always get so choked up when I talk about this, but that's how I was able to give all of myself."

Magrath is proud that she was an oncology nurse at a time when such great leaps in curing cancer were made available.

"I was primary care nurse for 14 kids at the time," said Magrath of her years in the chemotherapy department of the hospital in the 2000s. "When I was in training to be a nurse kids died of leukemia and then to be able to treat them - I mean, we've got kids in the community that are now grown and are married and have children - and that's the most wonderful thing about living in Prince George is that I still see them. There were big strides made in chemotherapy and to be able to be part of that huge era is just so fulfilling."

"And I always wanted to do whatever I could to make life better for them," Magrath said. "Look Good Feel Better is just such a wonderful thing to be part of. And we've got a really strong team here - we've got really great volunteers in Prince George and we all know none of it would be possible without them."

Each workshop offered here is the same as every other workshop held in Canada. Participants of the workshops would come in and Magrath said she'd see how shy the women were at first.

"We'd go through the 12 signature steps of the program where we teach them how to look after their skin, how to cleanse, how to moisturize, even out their skin tone and then we go into hair alternative options," Magrath said. "Just to see this happen to them and them looking in the mirror and you can just see it's a makeover for the spirit and they're happy."

As time goes by in the workshop there is a quick development of camaraderie that is seen around the table, she added.

"Women are sharing their stories and talking to each other, which is a big part of the workshop," Magrath said.

Without the support of the Centre for the North B.C. Cancer Agency, chemotherapy nurses, patient support services, pre-admission clinic, and the breast health program, the program would not be possible, Magrath said.

"They are all really very supportive of the program," said Magrath.