For Troy Young, the greatest benefit of training dozens of Wet’suwet’en workers as heavy equipment operators for the Coastal GasLink pipeline will be felt in a decade as those workers are spread out across the province.
Feb 14, 2020 9:51 AM By: David Carrigg 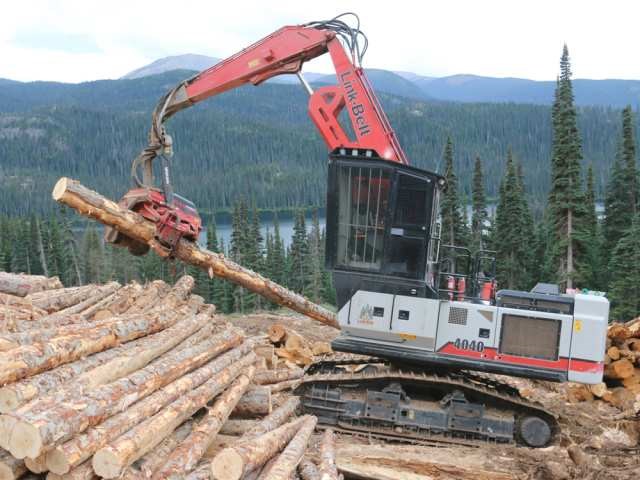 A Wet’suwet’en member operates machinery loading logs from a right-of-way clearing on behalf of Coastal GasLink in the fall of 2019. The machine is being operated 15 km west of work camp 9A on the Shea Creek Forest Service Road.Photo courtesy of Troy Young

For Troy Young, the greatest benefit of training dozens of Wet’suwet’en workers as heavy equipment operators for the Coastal GasLink pipeline will be felt in a decade as those workers are spread out across the province.

Young, a Wet’suwet’en member and general manager of Kyah Resources Inc., is one of several primary contractors completing clearing and road-building work for the 670 km underground gas pipeline being built to service the LNG Canada plant under construction in Kitimat.

Kyah Resources is a joint venture between Young’s private company and the Witset First Nation - one of the five Wet’suwet’en bands that have signed access and benefits agreements with Coastal GasLink.

The only Wet’suwet’en band not to sign is the Hagwilget, in the northernmost part of the nation’s 22,000 square kilometre territory.

“This is a great opportunity for people who have skills, but don’t have a huge amount of time on the machines, to gain that time and become employable pretty much anywhere in B.C.,” said Young, 49, speaking from Houston B.C.

“If you don’t have the resumé that says you have three years running Cats and you go for a job as a Cat operator people look and say they don’t want to train you. Here we have an opportunity to train up to 100 people who are going to be able to work anywhere. If you want to be an equipment operator getting time in the seat is the most important thing that can happen.”

Young also sees the advantage First Nations machine operators will have on work sites where they are skilled and not general workers.

“It’s a big equalizer to show that you have skills to operate stuff.”

Young is among Wet’suwet’en members starting to speak out as anti-pipeline protests spread across Canada in support of a group of Wet’suwet’en hereditary house chiefs who are opposed to the routing of the pipeline across Wet’suwet’en traditional territory.

They say they, and not the elected band councils, are in charge of the traditional lands, which are not in reserves.

The project is supported by the provincial and federal governments. On Wednesday, Prime Minister Justin Trudeau said he would meet with those hereditary chiefs in opposition, as protesters in Metro Vancouver occupied Attorney General David Eby’s office, forced the eastbound WestCoast Express to a standstill and threatened to shutdown government buildings in Victoria on Friday.

Tiffany Murray, Coastal GasLink’s director of Indigenous relations, said that last December the company’s contractors employed 1,100 workers, of which 400 were Indigenous - mostly from the 20 B.C. bands that have signed agreements. Murray said that number would balloon by the summer, as more work camps were built.

The company has promised to spend $1 billion of its $6.6 billion budget providing direct funding, employment and training opportunities for affiliated First Nations.

“As we continue our clearing works we will have more of our workforce accommodations in by spring and summer. Then things will ramp up,” she said.

There are currently six work camps along the route, including Camp 9A, where Young’s workers are staying and which is at the centre of the current controversy.

In late December, workers staying at the camp were asked to leave by a group of Wet’suwet’en hereditary leaders and they complied. Coastal GasLink then got a Supreme Court of B.C. injunction demanding the workers have access to the campsite and that any blockades be removed.

A deep and unusual cold set in and both sides were at a stalemate. Workers were allowed back to the camp for a day to make sure the cold would not damage property.

Last week, after weeks of standoff the RCMP moved in, demolishing the blockades and arresting protesting Wet’suwet’en members.

Young said Camp 9A can house 120 workers. He expects his workers to take around three years to complete the project, essentially cutting a between 30- to 50-metre wide swath through the forest, at which point they will meet up with Haisla Nation work crews cutting east from Kitimat.

“Once the pipeline is in the ground, there is still maintenance work that needs to take place. We will have trained people here so it makes sense we will do the work,” he said.

He also expected there to be more pipeline work in the future, including the Pacific Trail Pipeline Project.