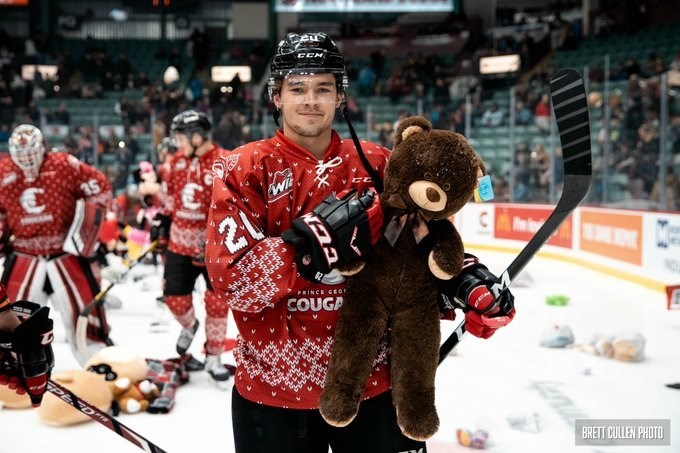 What a warm, fuzzy, feel-good way for the Prince George Cougars to end its 2019 home stint of the season.

The Cats battled to a 4-2 win over Victoria with Ilijah Colina pulling out all the arrows in his quiver Saturday night (Dec. 14) in scoring both the Teddy and Toque Toss and eventual game-winning goals to snap a six-game losing skid and a first home win in three tries.

The 19-year-old made the teddy bears rain down from the near-3,400 people at the CN Centre by potting the puck from the right side and under the arm of Victoria netminder Shane Farkas, initially taking a pass from Vladislav Mikhalchuk.

“Professionally, getting that Teddy Bear Toss goal, yeah it feels great,” said Colina when asked by PrinceGeorgeMatters what scoring the all-important first goal meant to him.

“It’s a game that only happens once a year and that means there’s only one guy who can score it. I’m happy with me personally, but if it was anyone else, I would’ve been just as happy.”

Taylor Gauthier was credited with the second assist on Colina’s fourth of the 2019-20 season, which came 1:28 into the featured game, one of two helpers he posted last night in addition to his 32-save performance.

In fact, the 18-year-old goaltender had three assists in the doubleheader with Victoria and combined for 64 saves on 68 shots.

The visitors managed to mount a quick comeback in the second period nabbing two goals in five minutes for a 2-1 advantage, including one from Gary Haden for his third goal and fourth point in two games against Prince George this weekend.

However, in his 10th game as a Cougar, Nikita Krivokrasov didn’t allow that one-goal deficit to last for long and caged the puck just 31 seconds later to tie it up 2-2 going into the intermission.

Connor Bowie was awarded the lone assist on the game-tying marker and from there, Prince George was able to maintain a steady offensive pace.

Colina’s second of the night was a wrister from the slot after taking a pass from Tyson Upper caught in the Royals’ corner 6:17 into the final frame.

Farkas was pulled late in regulation, which opened the door for Bowie to score with 27 seconds left on the board, with a helper from Gauthier, to seal the deal and take three of a possible four points from the final home weekend of the year.

This the third home victory for the Cougars in their last six and, going back to 2009, have now won nine of their last 11 Teddy Bear Toss games, the last two being against the Royals.

Prince George’s record improves to 7-20-1-3 and will now play four games in a 13-day span over the holidays before returning to the northern capital in 2020.

The Cats will be in Langley to face the Vancouver Giants on Tuesday (Dec. 17).

.@PGCougars snap a 6-game losing streak with a 4-2 victory over @victoriaroyals 🚨 Ilijah Colina had 2 goals, including the Teddy/Toque Toss marker, while Taylor Gauthier had 32 saves & 2 assists | #CityOfPG @PGMatters pic.twitter.com/28jHuyQhVR