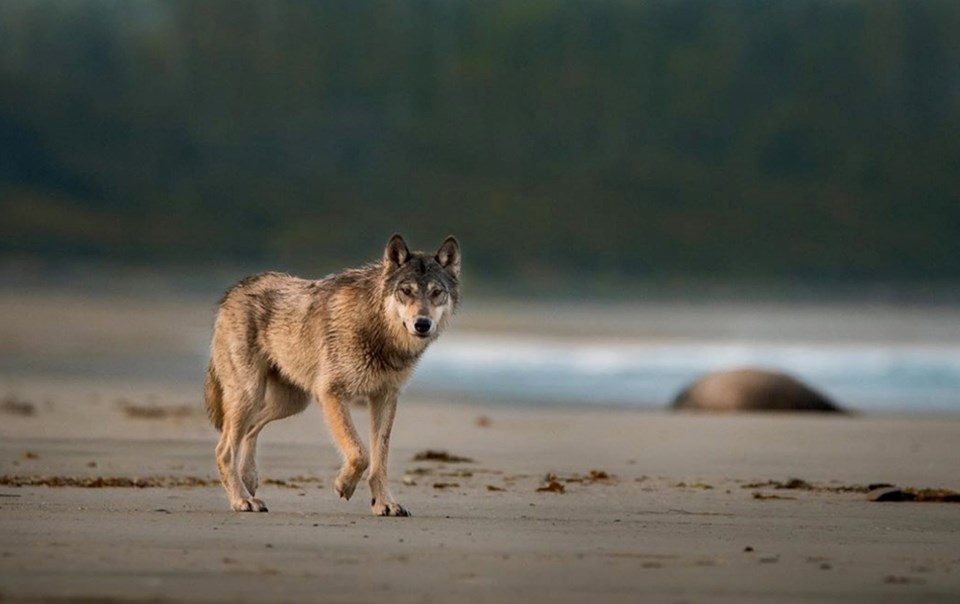 The elusive coastal wolf on Vancouver Island. (via Ian Harland)

Moving like ghosts along Vancouver Island’s shorelines, it’s rare that you’ll catch a glimpse of the elusive coastal wolf, but two Vancouver photographers managed to do just that.

Wildlife photographers Ian Harland and Liron Gertsman spent three weeks in May exploring Clayoquot Sound in search of the shy Vancouver Island wolf, what resulted was some incredible footage of the animal.

Harland released a five-minute Instagram TV video this week that shares the duo’s adventure, and the efforts it took to photograph the animal.

“I was eventually rewarded with one of my favourite encounters with wildlife I’ve ever had,” Harland said in the video.

The Vancouver Island wolf is a subspecies of the mainland grey wolf and is considered endangered, according to the Institute for Coastal and Oceans Research at the University of Victoria. The Ministry of Forests, however, estimates there are about 250 wolves on the island, and their populations are increasing. Distinct from their mainland cousins, the coastal wolf has a diet high in marine-life and is happy to swim far distances.

Living in packs from five to 20, the wolves usually stay far from human activity and are most commonly seen on the northern portions of the island, and as well as within Barkley and Clayoquot Sounds, according to the institute.

Harland and Gertsman went to great lengths to gather footage of the wolves, spending many nights camping on remote beaches, following their tracks and talking to researchers.

Just when they were beginning to lose hope of seeing a wolf, Gerstman spotted a washed up sea lion carcass in the distance.

“After a while we began hearing a crow cawing and a beautiful wolf began trotting towards the carcass while also examining us,” Harland wrote on Instagram.

In a separate instance, the duo also filmed a wolf playfully hunting rodents.

“When I was watching this coastal wolf it was doing something I had never heard of them doing before,” Harland wrote on Instagram.

“It was killing rodents for fun. It would catch one and then would fling it into the air just to find and pounce on again. When it would lose the rodent it would go and find another one.”

Harland—who told V.I.A earlier in the year he hoped his photography would inspire people to want to protect Canada’s beautiful wildlife—wrote on Instgram that he is focussed on raising awareness about B.C.'s larger population of wolves because of the government’s controversial Wolf Management Plan.

“Seeing a wolf for my first time was incredible and makes me want to share one of their main problems in British Columbia; the government killing hundreds of them,” he wrote.

“The goal of this program is apparently to help the struggling population of caribou. Without efforts to protect the caribou’s old growth habitat, the wolf cull is at best a short-term solution.”

The 19-year-old nature lover has been honing his photography skills over the past five years. He started off photographing birds around Vancouver and then eventually began taking pictures of various wildlife across B.C. Including some epic shots of grizzly bears in Northern B.C.

His favourite subjects to photograph now are predatory animals but his Instagram also features a range of critters including foxes, otters, goats and deer.

He said he fell in love with nature and photography while visiting wildlife sanctuaries in Vancouver.

“One of the reasons I really love doing this is to give people an appreciation of nature and wildlife that they may not encounter,” Harland said.

Watch the video on coastal wolves below:

First IGTV video!! I spent three weeks in May off the coast of Vancouver Island. One of my main goals was to look for the elusive Coastal Wolf. Follow along to watch the adventure of looking for them.

This story originally appeared on Vancouver is Awesome.