Even though air quality advisories sometimes only last a day, there is still value in offering free transit rides to try to reduce vehicle emissions and promote the use of buses, says the city.
Jan 11, 2010 1:00 AM By: Gordon Hoekstra 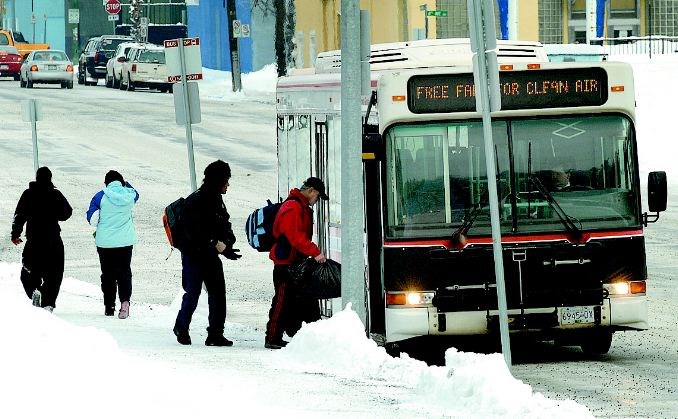 Riders get onto a bus in front of the Four Seasons Pool last Thursday morning. Although the air quality advisory had already been cancelled by that point, buses were providing free service due to Wednesdays advisory.

Even though air quality advisories sometimes only last a day, there is still value in offering free transit rides to try to reduce vehicle emissions and promote the use of buses, says the city.

The first air quality advisory of the year last week only lasted 24 hours.

And since it takes the city a day to trigger the free burs rides, the advisory had been cancelled by that time.

How fast the free transit policy could be triggered was one of the first points of discussion when the idea was floated, but it was discovered that it was simply not practical to issue free bus fares to coincide with the first day of an advisory, says Daniel Pearce, a transit analyst with the City of Prince George.

That's because it takes time to have the buses come in and plug into the computer to change their display signs, as well as cover up the pay boxes. The city also wanted some time to notify the public of the free bus rides.

Even if an air quality advisory is cancelled after 24 hours, it's not a loss because the air may not be completely cleared up, noted Pearce. "Overall, it's trying to change behaviour."

Counts indicate that the number of people riding the bus increases seven per cent during the air quality advisories when the free bus fares are in place.

Last March, city council adopted a one -year trial of free transit during air-quality advisories as a way to encourage air-pollutant emission reductions.

The recommendation came before council just two weeks after a six-day air alert was issued by the B.C. Ministry of Environment.

In putting the recommendation before council, city administration said it believed the approach will help reduce private vehicle operation during air-quality advisories. It also has the potential to recruit new transit riders, said administration.