Three days of hearings before an arbitrator will begin Thursday as the University of Northern British Columbia and its professors work to hammer out a first collective agreement.
Nov 17, 2015 9:12 PM By: Mark Nielsen 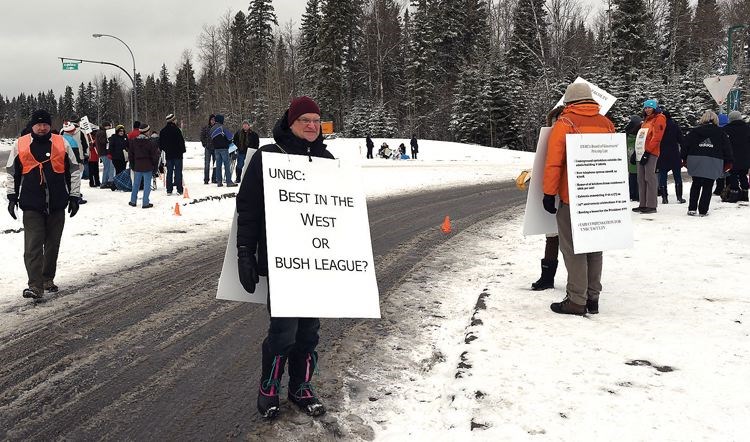 Three days of hearings before an arbitrator will begin Thursday as the University of Northern British Columbia and its professors work to hammer out a first collective agreement.

It's the latest development in the now long-running dispute marked by a two-week strike in March that ended when UNBC administration applied for mediation under a section of the B.C. Labour Relations Code that sets out a special process for first collective agreements.

When the process was complete, mediator Trevor Sones, who was appointed by the Labour Relations Board, recommended the parties go to binding arbitration and in April the sides settled on Stanley Lanyon for an arbitrator.

The process is similar to a court proceeding with the sides providing briefs in advance, then giving presentations and fielding questions from the arbitrator at the hearing, which wraps up with closing arguments.

Lanyon will then make binding decisions on the issues that have remained in dispute. It's expected he will give his findings early in the new year.

Lanyon has been given plenty to read in the lead up.

The UNBC Faculty Association has provided a 140-page submission in support of its position while the administration's submission adds up to 81 pages. Both are available on UNBC's website through the faculty and staff link.

"The issues are really around the financial settlement," said Barb Daigle, UNBC's interim vice president of administration and finance and human resources director.

"The university has maximized its offer in terms of what we think is appropriate around the (provincial) government's economic stability mandate and our ability to pay. We feel we've thoroughly addressed that in our submission."

Under the economic stability mandate, introduced last year, the government provides wage increases whenever the growth in B.C.'s gross domestic product exceeds a forecast made by an independent council.

The increase is based on half the difference and, on Tuesday, the government said it amounts to a modest 0.45 per cent increase for public sector employees.

UNBC Faculty Association president Stephen Rader said he hopes Lanyon will award a "fair contract that allows UNBC students to receive the same quality of education as students around the rest of the country receive."

He said professors are seeking a "sector norm contract" in line with what colleagues receive in similar universities elsewhere in Canada.

"Part of it, of course, is the salaries," Rader said.

"Also, there's the issue of promotion and tenure, what the process is for that. There's things like sick leave and disability leave - how long before you have to go onto long-term disability - provisions for those sorts of things."

The hearings are expected to wrap up on Saturday but two further days have been booked on Nov. 30 and Dec. 7 in case they're needed.