Twelve new cases of COVID-19 were reported in northern B.C. on Monday, as provincial health officer Dr. Bonnie Henry brought in new restrictions to stem a surge in cases across B.C.
Oct 26, 2020 5:07 PM By: Arthur Williams 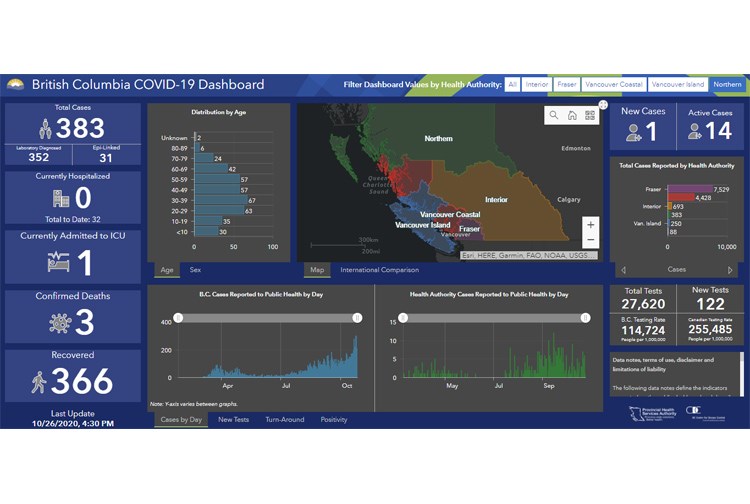 Twelve new cases of COVID-19 were reported in northern B.C. on Monday, as provincial health officer Dr. Bonnie Henry brought in new restrictions to stem a surge in cases across B.C.

On Monday Henry issued a public health order restricting gatherings in private homes to a maximum of six people, plus immediate family.

"Orders are a last resort. My hope is people will pay attention... and that enforcement won't be needed," Henry said. "We are seeing some of the effects of family gatherings on Thanksgiving."

A significant number of new cases in the province have been linked to large family gatherings, she said. Most homes are simply too small to accommodate large groups of people safely.

"We've seen transmission associated with parties in every part of the province," she said. "This is not the time for Halloween parties – for adults getting together."

Halloween activities for children should involve small groups and stay outside, she said.

The order limiting in-home gatherings can be enforced by city bylaw officers, police and public health officials, she said.

Henry said she now expects all people to wear non-medical masks when in indoor public spaces like grocery stores, malls, etc. However, Henry said, she knows that some people can't wear masks for various health reasons and didn't force the issue with a public health order.

"When we go indoors, we should all be wearing masks," she said. "A mask can be an additional layer of protection."

Henry also urged businesses to take a second look at their COVID-19 safety plans, and consider making changes to reflect the current situation.

The province had 817 new cases reported between Friday's update and Monday, the largest increase on record in the province over a three-day period, Henry said.

The total number of cases in the province since the start of the pandemic increased to 13,371 – including 383 in the Northern Health region.

Public health officials were monitoring 2,325 active cases in B.C., plus more than 5,000 people who had potentially been exposed, Henry said.

The number of active cases in the north wasn't provided, but on Monday the B.C. Centre for Disease Control reported 14 active cases in the Northern Health region. There was one COVID-19 patient hospitalized and in intensive care with COVID-19 in the north as of Monday, the B.C. CDC reported, and 77 people hospitalized across the province – including 26 in intensive care.

"We knew this was a possibility," she said. "To me, this shows the plan is working."