Prince George may become home to two innovative green technology projects, as a pair of proposed biomass and biofuel plants are being considered for the city.

Canfor, Canfor Pulp and Paper and Licella, an Australian company, are behind a joint venture called Arbios Biotech which would use post-consumer biomass to produce advanced biofuels.

Arbios is also working on integrating its technology with a Nova Scotia-based company called Sustane who have developed a new recycling process for municipal waste that diverts waste from landfills and transforms it into clean fuel products and recyclable materials.

“We are existing to work in collaboration with companies like Sustane at a circular economy solution ideally one that is regionally based and targets recovered wood and biomass products,” said Alan Nicholl, Chief Financial Officer for Canfor Pulp Products, Inc. during last night;s presentation to city council (March 8).

The idea is that Sustane would produce biomass fuel from recovered municipal waste and deliver it to Arbios who would then use it as feedstock for producing biofuels. 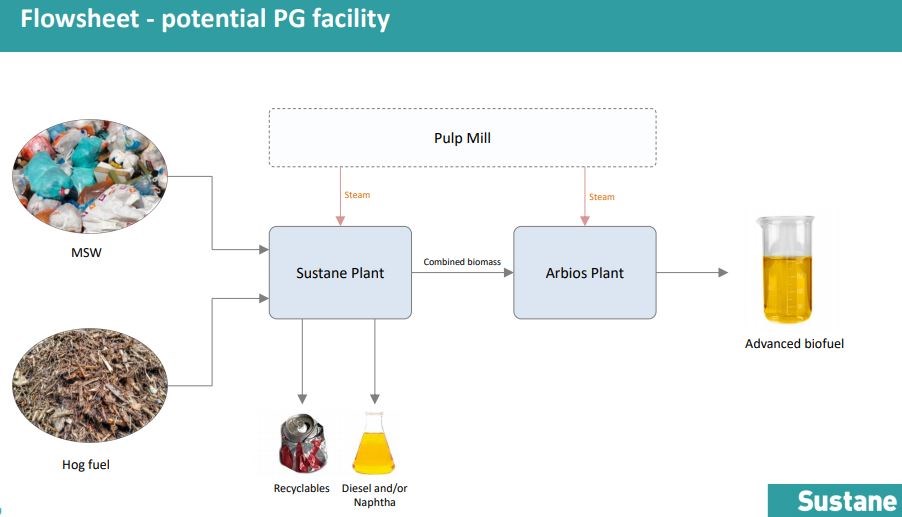 How the two projects would work together. By City of Prince George

Nicholl says Arbios technology can process a wide range of feedstocks including wood-based residues and Sustane’s biogenic pellets and the carbon intensity of Arbios biofuel is 70 to 80 per cent less than fossil-fuel-based gasoline and diesel.

“Canfor and Canfor Pulp are very excited to be looking at investing in Arbios it is very closely aligned with our sustainable and innovation focus which clearly in these times is taking our attention right now.”

Nicholl says Prince George has been selected as the preferred site for the first Arbios plant which would be located at Canfor’s Intercontinental Pulp Mill.

“At full capacity, it will generate meaningful employment with 150 jobs and 600 indirect jobs and on top of that it will give employment through construction,” said Nicholl.

The Sustane plant would also be located at the same site with a conveyor to the Arbios facility and would employ about 25 people.

“We have been working with Canfor and Arbios for a while trying to figure out how to integrate our technologies,” said Peter Vinall, president of Sustane, during the presentation.

He says for the whole community of Prince George this would reduce greenhouse gas emission by 10 per cent and that there’s potential to shift this region to become a world leader in waste diversion.

“The proposal that we make to communities is that we build and own and operate the plant at a net savings and at a lower cost than landfilling in exchange for your garbage and a tipping fee for a reasonable period of time.”

The company was established seven years ago and received a $2.8 million grant from Sustainable Development Technology Canada to help Sustane deploy its technology.

It already has a plant running in Chester, N.S. where Vinall says they’ve proven the concept works and are now ramping up production.

“We have done some testing and we are pleased with the results we have achieved and are excited about the opportunity in front of us in Prince George,” says Vinall.

“Our process is primarily a mechanical recycling process. We use multiple stages of mechanical separation to make clean streams of products that can have a beneficial use. For example, clean biomass we can turn into a fuel product or a feedstock for let’s say an Arbios plant to turn into a biofuel.”

The Sustane process also produces valuable by-products like recycled metals and diesel or naphtha, which can be used as a feedstock for plastics.

“We look forward to an opportunity to develop this project and work with the city and just see how we can make this work that would be a true win-win.”

These two projects are in very early stages as Canfor has not yet committed financially to developing the biofuel plant.

“We are planning a broader community engagement in the coming months as we get closer to making a final investment decision of which today we think is likely to happen in the third-quatre of this year,” said Nicholl.

“That decision will pertain to the first phase of a multi-phase plant with the hope that we will have that mill up and running before the end of 2022.”

Nicholl added that the company is also in the process of engaging in discussions with local Indigenous nations and other stakeholders, as well.