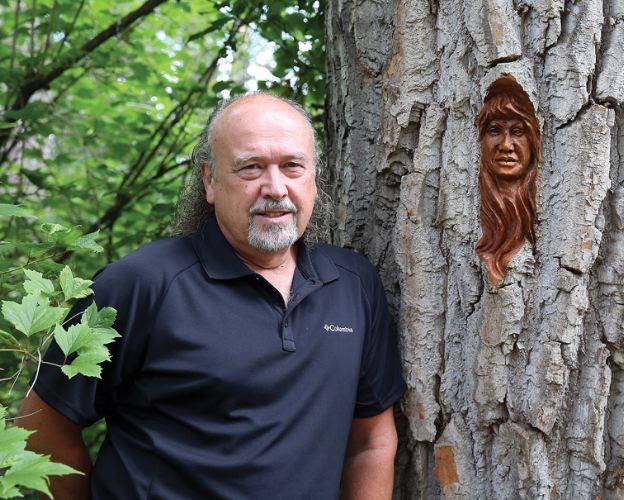 Elmer Gunderson stands with one of the six new carvings he has done in Cottonwood Island Park.James Doyle, Photographer

After speaking with one man on the trail for about 10 minutes, Gunderson recreated the man's face by memory in a tree.

"So he was one of the characters I did," said Gunderson, whose latest project was made possible through a City of Prince George community enhancement grant.

Will the man ever know there is a likeness of his face at Cottonwood Island Park?

"I never told him he was going to be one of the carvings I did," said Gunderson.

So the passerby might recognize his face, which is now permanently etched in a tree.

"Then I had a lot of people say that one of the trees they missed, because it washed away, was the one I called the condominium for tree spirits that was close to the water," said Gunderson. "At the time it was about 20 to 30 feet back from the bank but when we got that ice jam the high waters came up and took it out."

"A lot of people said how much they enjoyed the tree-spirit condominium so I did one like that for my new carvings," said Gunderson. "Kids really like that one - I always see pictures on Facebook with kids posing beside it."

One other carving Gunderson did is of a woman's face, he added.

"I don't do too many women but I did a lady because a little girl came by to say there weren't any ladies," said Gunderson. "So I did one for her. Women are so hard to carve though. You got to get them just right. With men you can be rougher on the face and they still look like men but for women you gotta be just right. I found that one of the hardest things to do."

Gunderson always makes sure to honour the First Nations people since the park is on Lheidli T'enneh territory, he said. He also has done faces of trappers in the past and this time he did a couple of whimsical people, he added.

His carvings at Cottonwood Island Park started years ago.

In 2005, Gunderson, who originally taught himself to carve in Cottonwood, was asked to do eight carvings along the trails at the park, which were sponsored by the City of Prince George's 90th anniversary committee.

"It's a great medium to work in - it's nice and soft, it's easy to carve, it sands well, and holds detail," said Gunderson, who has six of the original eight carvings remaining.

"So then I was approached this year by Jeff Elder (cultural coordinator of the Fraser-Fort George Regional District) and he asked if I would be interested in doing some more because they are so popular," said Gunderson. "And I was all gung-ho for that so about a month ago I did six more trees and carved them up."

Gunderson, who started working for the city park's department in 1974, and helped build the trails at Cottonwood in the '80s, checked with the city's arborists before starting his first carvings to make sure carving into Cottownwood wasn't going to hurt the living trees.

"As long as I stayed within the outside of the bark, it was fine, so that's what I made sure I did," said Gunderson, who has now put his focus on clay and stone and doesn't work so much in wood anymore.

"I used to do a lot of the bark carving and I'll always go back to my roots - get it? Roots?" he laughed. "So once in a while I'll do a little bit of bark."

After doing the bark carving in 2005, Gunderson went around the province competing in chainsaw carving.

A lot of his work can be seen in Chetwynd as he competed there eight years in a row and the town gets to keep the carvings after the contest is done. He also traveled to Vancouver Island to Campbell River and then put away the chainsaw and turned to stone and clay work.

"They are all very nice mediums - wood and stone but clay allows me to correct my mistakes and you have a whole new avenue of things you can do," said Gunderson, who traveled to New York to attend a week-long course on clay to learn from Philippe Faraut, a famous sculptor.

There is now a whole trail filled with tree bark carvings to enhance the Cottonwood Island experience.

"You can tell people there are 13 carvings but there's only 12 because people like to hunt for them," said Gunderson teasingly.

"That will keep them going back to look at the carvings done by a homegrown Prince George man."