COVID-19 currently limiting capacity to 50 people, could get to 80
Nov 9, 2020 2:15 PM By: Kyle Balzer
Previous Next
1 / 1 The Prince George Aquatic Centre has put COVID-19 safety protocols in place since it's Sept. 8, 2020 reopening. (via Kyle Balzer, PrinceGeorgeMatters)
Expand
Previous Next

The increased demand and overall response to the Prince George Aquatic Centre’s reopening in September is leading to a potential move in the new year.

According to City Community Services and Public Safety Director Adam Davey, the recreation facility is looking to move into ‘Stage Three’ of its operations in January 2021, which, presuming COVID-19 health and safety protocols are continued to be met, could expand the open-swim capacity rate from 50 visitors to 80.

In a report to Mayor Lyn Hall and councillors, which Davey will present tonight (Nov. 9) during its regular public meeting, he explains language changed on Sept. 18, 10 days into the Aquatic Centre’s reopening, with regards to the order on gatherings and events by Provincial Health Officer Dr. Bonnie Henry.

Davey further states the order doesn’t apply to ‘individuals in a Recreation Centre when not attending an event,’ meaning a transition from ‘Stage Two’ is very likely possible for more residents looking to stay active during the winter months.

However, restrictions and safety measures will not be loosened should this take place.

“This order does not negate the requirement of maintaining physical distancing, contact tracing or pool specific requirements from the BC Lifesaving Society,” Davey’s report reads.

“It does however allow the PGAC to increase capacity. Since early October, swim blocks have increased from forty (40) bathers to fifty (50) bathers with fill rates remaining at near full capacity.”

With every change in ‘Stage Three,’ the Aquatic Centre would still require face-coverings to be worn in the change rooms and corridors, placing the mask in a plastic bag and into a cubby before heading into the water.

The 30-person increase to 80 would only apply to the weekday morning, mid-day and evening blocks, as seen in the schedule below, and all day on weekends with an hour in between for sanitization.

Davey’s presentation goes on to explain Seniors Swim would go up to 65 bathers, while the swim clubs would be able to have 130 athletes in the pool under their provisions of being a ‘sport cohort.’

Diving boards and towers would only be open during weekend open swims, sans the morning block.

Registered lifeguarding and aquafit classes would also be available for residents as they must sign up in advance before utilizing the Aquatic Centre. 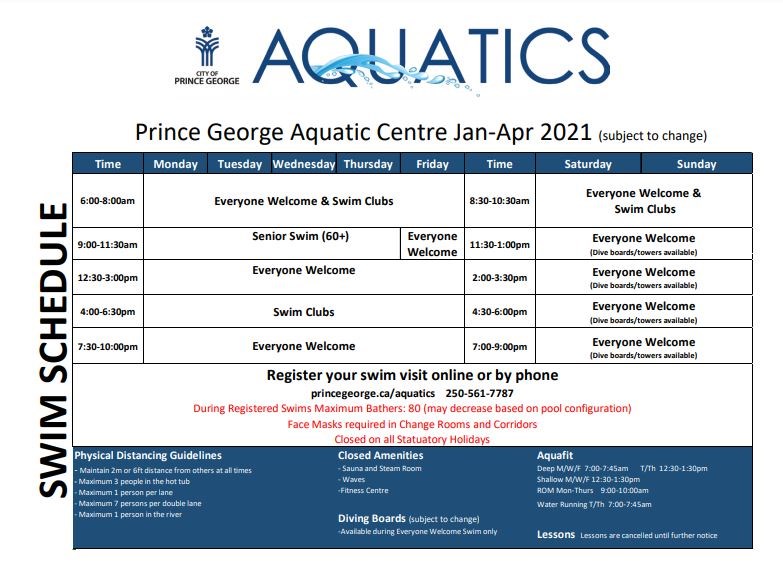 Tentative 'Stage Three' schedule for Prince George Aquatic Centre as of Jan. 2, 2021 during COVID-19. (via City of Prince George)

It’s no surprise Prince Georgians like to stay active as much as they can, but when winter settles in, it’s hard to go out for a jog or a bike ride without slipping.

Swimming is one of those popular options and with the Aquatic Centre being the only accessible facility open for activity, it’s generated a 99 per cent average fill rate per block since it reopened on Sept. 8.

Davey goes on to explain that between then and Sept. 30, more than 4,300 guests took advantage of the modified operations and he believes the numbers will continue to ascend up the high dive in the months ahead.

“Based upon thirty-five (35) weekly swim blocks up from the current thirty-three (33) swim blocks, we estimate 2,800 customers will attend the Aquatic Centre each week and 11,200 customers per month. Swimmer occupancy is estimated to have a 40 per cent increase in bathers from current operations.”

If the COVID waters in November and December continue to tread safely for Prince George swimmers, the next stage would come into effect on Jan. 2, 2021.

You can livestream the meeting inside council chambers via the city’s website.