Prince George is now home to one of the province's top Toastmasters. Mike Carr, a 35-year-old project manager and systems administrator at Winton Homes, was named the District 96 Outstanding Toastmaster of the Year on Nov. 21.
Dec 4, 2015 9:50 PM By: Mark Nielsen 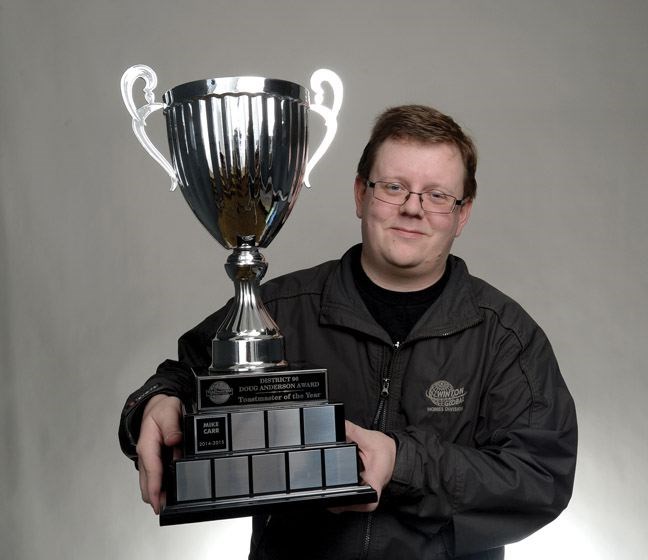 Prince George is now home to one of the province's top Toastmasters.

Mike Carr, a 35-year-old project manager and systems administrator at Winton Homes, was named the District 96 Outstanding Toastmaster of the Year on

District 96 covers all Toastmasters Clubs west of the Fraser River in B.C., adding up to 2,825 members.

Founded in 1924 by Ralph Smedley, a YMCA director in the United States, the nonprofit movement helps members improve their communication, public speaking and leadership skills.

Even before he was presented with a sizeable trophy acknowledging his achievement, it has been a rewarding nine years in Toastmasters for Carr.

In his 20s, Carr was a "social phobic" and "absolute wreck" who couldn't go out in public, let alone speak before an audience.

Despite some coaxing from a series of employers, Carr was reluctant to take that first step. But when he did, he took a plunge. By the end of the first night he went to a Toastmasters meeting, he was a member and by the end of the second night he was on the executive.

And in the time since, he's completed 28 Toastmaster designations, seven of them in the past year. Earning a designation is a self-paced process that requires completion of about 10 projects and most members achieve one or two designations in a lifetime.

"A self-improvement program doesn't do any good when you're not ready for it," a noticeably well-spoken Carr said. "The hardest thing to do is to step into that room for the first time. We get lots of people who are just terrified and they come out and say 'wow, I wished I'd done this years ago, it could've changed my life.'"

Carr can even credit Toastmasters for meeting his wife. She came across Carr's postings online and was so moved by his story she got in touch with him. They continued to correspond and eventually she moved from Dawson Creek to Prince George.

"I actually proposed to her as a Toastmasters project," Carr said. "I told my family I was doing a speech honouring my dad, brought my family out, and halfway through the speech I proposed to her and she accepted. It was a great experience."

Some nine months after he became a member, Carr convinced his mother to join and she's now president of the Prince George Toastmasters Club - one of eight in the city. She's also moved on from a "very introverted, detailed job behind a desk" to speaking to groups of 20 and 30 professionals as an advocate for preventing HIV and other blood-borne pathogens.

Carr is the vice president of education, which means he helps members set and achieve goals.

Prince George Toastmasters meets every Thursday evening at the local headquarters for AimHi, which supports people with developmental challenges.

Some of AimHi's clients are club members and have earned designations. Four of them now sit on the AimHi board, Carr said.

For more information on the local clubs, visit pgtoastmasters.ca.