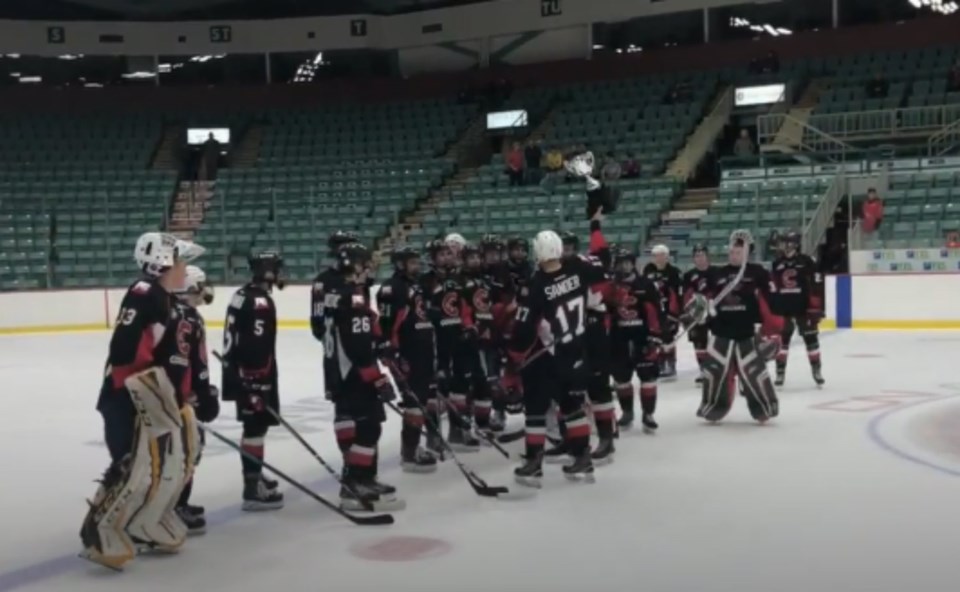 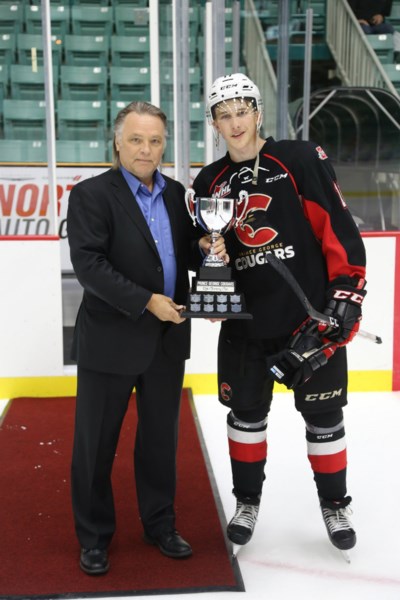 Every player on the ice Tuesday night (Aug. 27) was making their last case for a spot on the Prince George Cougars’ roster for the 2019-20 season, and they were willing to fight for it in front of coaches, trainers, and roughly 500 fans at the CN Centre.

After 60 minutes of ice-time, over 30 of which was spent combined in the penalty box, it was Team Black that had won by a score of 5-3 over Team White and captured the Rob Charney Cup.

While the game was the end to the Cats’ five-day training camp, it certainly showed the passion and heart for the sport in proving to their peers and teammates that they’re ready to play in the Western Hockey League (WHL).

Four times during the intrasquad game players from both teams were sent to the sin bin at the same time.

One included offsetting five-minute fighting majors to Blake Eastman (Black) and Joe Kennedy (White) in a bout that last for five seconds after they exchanged haymakers and ending in Eastman tackling Kennedy to the ground.

It may have been in the spirit of competitive with a touch of good fun, but the physicality of the contest was something Team Black talked about before the game started according to Defenceman Jack Sander.

“Everyone’s got to play their own game,” the 19-year-old said to Cougars TV after hoisting the Rob Charney Cup. “They’re here for a reason and that’s what we did. We went out there and did just that. It’s good because you see a lot of that stuff in the regular season too, so it’s good to see people elevate a good game.”

The Beaumont, Alta. product scored a game-high two goals, including the 2-1 go-ahead and 5-3 insurance markers, both in the second period.

He’s is entering his third season with Prince George, coming off a career-high seven points from the backline, including five assists.

Sander was also a co-recipient of the team’s Mountain Lion Award with Tyson Upper, which is awarded to the player that demonstrated the best off-ice, off-season commitment to health and fitness.

He said his aggressive play is something he’s been trying to improve since the end of 2018-19.

“It's a big part of my game, you know, I’ve been working on it in the off-season; working on my shot and I look forward to being a potential threat on the offense and maybe even on the power-play.”

Prince George’s first pick in the 2018 WHL Bantam Draft Craig Armstrong recorded a goal and an assist for Team Black; he was also one of those that spent two minutes for roughing in the penalty box.

Reid Perepeluk had a team-high two points for his squad, both assists and coming on Team White’s first two goals.

The Cougars will be looking at shortening their roster as pre-season games on now on the horizon.

They’ll be off to Langley for the annual B.C. Division showcase, taking part in games against Kamloops, Vancouver, and Kelowna.

After that, Prince George will be headed north to ‘Mile Zero’ of the Alaska Highway, playing a two-game home-and-home exhibition series against the Edmonton Oil Kings at the Encana Events Centre in Dawson Creek on Sept. 12 and 14.