More than two-thirds of the respondents to a School District 57 questionnaire believe Kelly Road Secondary School should be kept for the new Hart high school set to open in September.
Apr 22, 2020 7:16 PM By: Citizen Staff 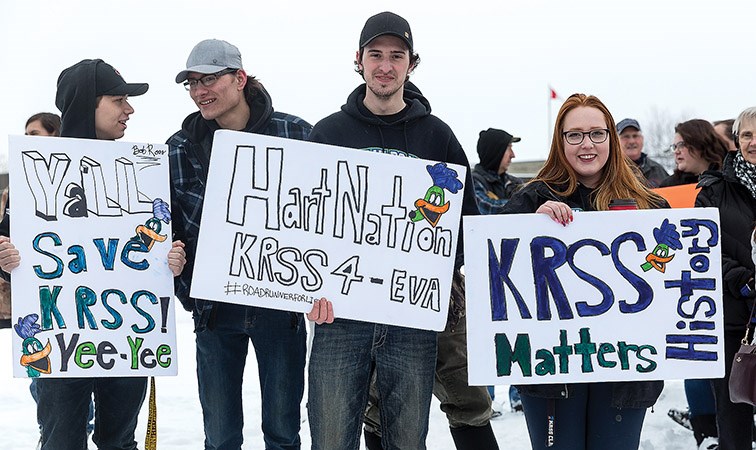 Citizen Photo by James Doyle. Protesters hold up signs on Saturday morning at the corner of Highway 16 West and Ferry Avenue during a rally in opposition of the proposed name change to Kelly Road Secondary School.James Doyle

More than two-thirds of the respondents to a School District 57 questionnaire believe Kelly Road Secondary School should be kept for the new Hart high school set to open in September.

The results of the questionnaire were presented in a 19-page report to School District 57 trustees meeting online Wednesday night. The board is scheduled to make its final decision on the name of the new school at its April 28 meeting, ending two months of heated public debate. The trustees unanimously voted at the board’s February 25 meeting to engage in a process to rename Kelly Road, sparking a huge public outcry.

With 2,707 responses to the questionnaire over a four-week period, 68 per cent said the school name should remain Kelly Road.

Thirty per cent of respondents believe the name should include the proposed Shas Ti Secondary. Shas Ti – or “grizzly trail” – was put forward by Lheidli T’enneh Chief Clayton Poutney and elders at the Feb. 25 meeting when describing the Indigenous history of the land on which the school sits.

One per cent of respondents suggested other names for the school and another one per cent did not suggest a name.

Respondents wanting to keep the Kelly Road name said so because of their family’s connection to the school and the feeling their memories and connections to the school would be lost. Meanwhile, the Shas Ti proponents argued that it was a good way to move forward with reconciliation with the area’s Indigenous peoples. The group suggesting a combined name thought it was a good way of recognizing both the settler and Indigenous history of the area.

Nearly 86 per cent of respondents believe both histories can and should be incorporated into the new school in some way.

Those wanting to keep the Kelly Road name suggested doing this by incorporating the Shas Ti name elsewhere in the school, expanding the curriculum, changing the school’s current mascot name of Roadrunner and featuring displays and art to reflect the area’s links to the Lheidli T’enneh.

For those wanting to change the name to Shas Ti, they made many of the same suggestions in reverse – recognizing Kelly Road and/or John Kelly elsewhere in the school, as well as a historical display of Kelly Road Secondary.

Nearly half of the respondents (48 per cent) identified themselves as being between 35 and 54 years old. Students aged 13-17 made up five per cent of respondents.