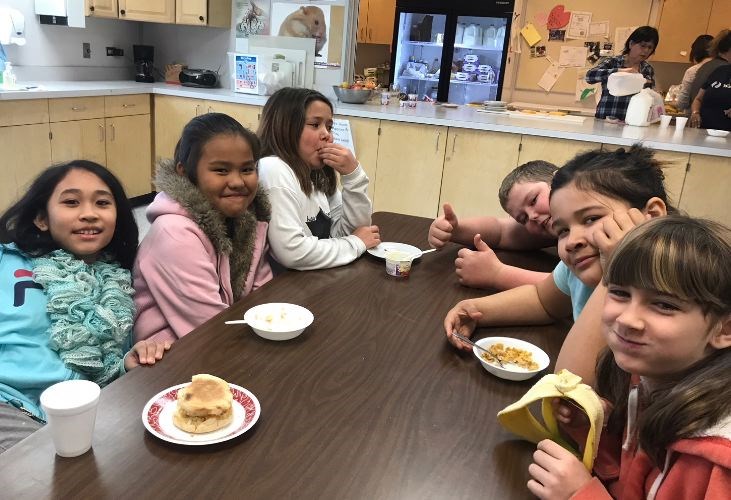 In this file photo, Ron Brent Elementary School students enjoy a nutritious morning meal before class. There could be more lunch program budget supports for local schools upcoming when the province finalizes its plans in mid-March.Breakfast Club of Canada

Total revenues for the district, including education ministry grants, rentals and leases, investment income, deferred capital contributions and other income amounted to $167.25 million. The rest of the budget, $9.125 million, came from the district’s surplus funds.

This year’s balanced budget reflects a revised student enrollment count of 13,269, down slightly from the projected total of 13,373. The number of school-aged students dropped from the 13,249 estimated in May to the actual count of 12,148 taken at the end of September.  The number of adult students in the district also fell short of projections, from 106.75 to the actual count of 104.625 adult full-time equivalent students.

“We have a balanced budget and we used surplus dollars to do that,” said trustee Sharel Warrington. “In our expenses the board is moving forward and we’re making progress in terms of the maintenance of our schools, we’re providing portables to address our capacity issues and I’m very pleased with our budget process.

“We had fewer students than anticipated and that meant fewer dollars from the ministry but we’ve managed to find those dollars in our services. We put the money in staff and pay attention to what we don’t to do in supplies. There are trade-offs in all budgets.”

The province has promised there will be additional funding for schools to pay for Indigenous programs, lunch/breakfast programs for students from low-income households and more support for students living in the care of provincial authorities Superintendent Anita Richardson said the district remains “cautiously optimistic” that targeted funding will come through in mid-March.

“Whether that’s new or repurposed funds, we’re waiting to see what the overall impact on our budget would be and the dollars we’ll have to put to classrooms and students that need it,” said Richardson.  “The school district is growing but not as much as we projected it to grow, so from a budgeting perspective that’s difficult in the current year. But it is projected to continue growing.”

The board adopted the recommendations of the advisory committee to address concerns about catchment and capacity at schools expected to push the limits of their student capacity in the 2020-21 school year and subsequent years.  As a result of a change in catchment boundaries for D.P. Todd Secondary, which will feed graduating elementary students from Edgewood and Spruceland Traditional to D.P. Todd, the board will purchase three additional modular portable classroom units for use at D.P. Todd on a short-term basis.

The committee also advised the board to continue its efforts to advocate with the Education Ministry that an expansion/renovation project for D.P. Todd be included in the province’s five-year capital plan. The board will also replace the three existing portables in use at Heritage Elementary. It will review 2020-21 catchment boundaries for the near-capacity Heritage in light of the fact neighbouring Quinson Elementary is underutilized.

Crowding also exists at Springwood and Hart Highlands and the board will consider boundary changes to shift more students to underutilized Nukko Lake Elementary. The board will also look into amalgamation of Blackburn, Pineview and Buckhorn schools into one elementary school. There are also concerns about crowding in the PGSS and College Heights family of schools which the board will monitor and review.

The first day of school in the 2020-21 calendar year will be Sept. 3 and the last day of classes is set for June 25. The Christmas break starts Dec. 19 and classes resume Jan. 4. The calendar includes a two-week spring break which also encompasses Easter.  Classes will end on Friday, March 19 and students won’t return until the Tuesday, April 6. The calendar includes six professional development non-instructional  days - Sept. 25, Oct. 23, Nov. 23, Jan. 29, April 23 and June 4.