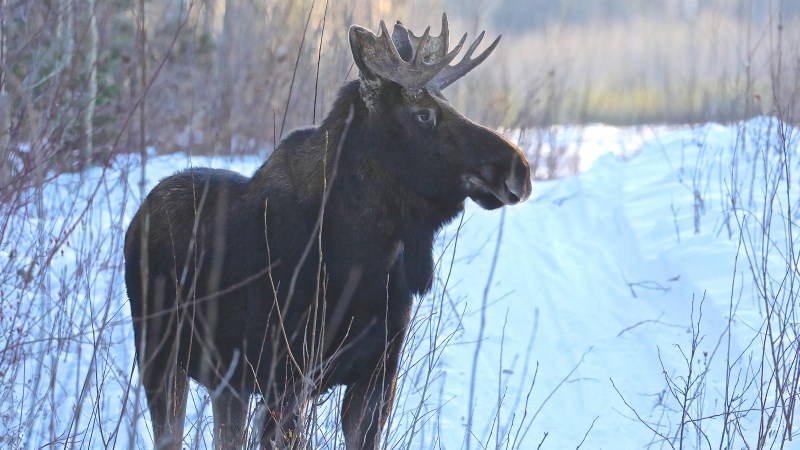 UNBC researchers and Prince George Airport Authority staff collaborated to get this moose to safety after it entered the airport's property.UNBC

A long-term collaboration has recently proven its effectiveness in the community when it comes to preserving wildlife and ensuring the safety of others.

On Jan. 19, 2021, UNBC and the Prince George Airport Authority (PGAA) teamed up to safely move and relocate a bull moose that wandered on the airfield side of a YXS security fence.

A series of cameras set up in the area by researcher Dr. Roy Rea first alerted the post-secondary of the endangered animal roaming near airport on Nov. 28, 2020.

“A moose is certainly something we don’t want to have walk in front of an aircraft,” said Rea in a statement this morning (March 4).

“Moose populations in this area are down 70 per cent and we’d rather like to see that animal survive and breed instead of being turned into hamburger.”

The moose was ultimately moved outside the fence safely thanks to additional consultation from Yellowhead Helicopters, the BC Conservation Officer Service and government biologists, in case other measures needed to be taken pending the animal’s cooperation.

UNBC says its joint partnership with PGAA has only strengthened as a result of the operation as wildlife monitoring and research projects have been conducted between the two since 2007.

Rea explains the cameras were initially set up in 2009 and have kept a watchful eye on a number of animals potentially halting airport operations, including bears, lynx and coyotes.

When he was alerted via cellphone, he immediately contacted PGAA Operations Manager Trevor Gust, coming up with plans to safely move the moose back to a nearby forested area.

“We have a wildlife program in place and there is a requirement that we are audited by Transport Canada to make to ensure that we're doing our due diligence where wildlife are concerned,” Gust adds in the same release.

“Having [UNBC] involved is a tremendous help because the researchers are able to do a lot of the leg work and then we are able to show Transport Canada all the work that has been done.”

With Rea and his team keeping an eye from afar on the moose’s movements, PGAA crews brought out firetrucks and were set to use sirens in case it walked towards the runways.

The moose eventually walked through a southwest-corner fence opening they created, using quads to gently motivate it to leave the airfield.

UNBC says a gate left open in a storage compound is likely what invited the moose onto the airport property, but Rea is grateful the opportunity presented itself.

“It’s a wonderful opportunity for students to work in the areas in which they're interested, like wildlife ecology,” Rea adds in noting PGAA provides funding to UNBC in gaining experience with related equipment.

“They can take all of that information and put that data together in such a way that it can be used by the airport for their wildlife monitoring program as well as for publications to help other airports develop similar methods.”

For more information on the moose relocation efforts and of UNBC’s partnership with Prince George’s Airport, you can visit the school’s website.