B.C. Liberal Leader Andrew Wilkinson called on Premier John Horgan Tuesday to restore a $25-million fund that many interior communities rely on for development in infrastructure needs.
Sep 24, 2019 10:53 AM By: Mark Nielsen 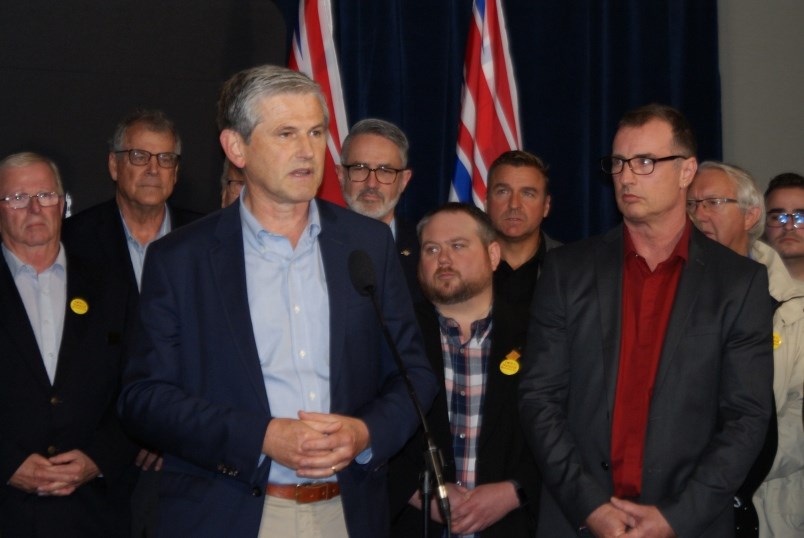 BC Liberal Leader Andre Wilkinson at the Union of British Columbia Municipalities convention on Tuesday.Glacier Media photo by Jeremy Hainsworth

What he left out, Wilkinson said, is that the funding came partially from the suspension of the Rural Dividend Fund.

The previous Liberal government established the fund to strengthen and diversify smaller communities. It has provided some $73 million to communities, First Nations and organizations over time.

“This is an insult to every single community that has lost its primary forestry employment, and now the NDP is taking away their only real hope of diversification,” he said.

Donaldson, however, said the government made a decision that workers affected by temporary or permanent mill closures need help so they could remain in their communities.

“That’s why we temporarily repurposed the funding in the Regional Development Program just to fund in part the $69 million.”

But, say leaders in those communities, their development and community health are threatened by the financial hit.

Williams Lake Mayor Walt Cobb said his city was going to use funds to build a water treatment plant as the community is on a boil-water order due to manganese contamination. That plan is now on hold.

Horgan said Cobb could have called him to discuss the infrastructure project.

“We’ll certainly be working with Williams Lake on that significant investment,” Horgan said. “There are other places where that funding can be accessed.”

Lumby Mayor Kevin Acton said the program had been used to do planning and economic diversification work.

“This has been a devastating blow to our community,” Acton said.

Fort Nelson regional District Coun. Danny Soles said the funds are being used to help people with the same problems people in his region are already experiencing.

“We need things like the R&D for development purposes,” he said.

MLA for Cariboo-Chilcotin and opposition critic for rural development Donna Barnett called rural communities the backbone of the province.

“For this government to take this away from our rural communities, to take them backward, is absolutely disgraceful,” Barnett said.

She said the funding removal would alienate small communities, drive away economic growth and put towns at risk.

"This funding diversion will be grouped with additional funding to help dozens of affected communities and thousands of workers and families in the forest sector," he said in a statement.

The package announced by Donaldson is made up of $40 million over two years for an early-retirement bridging program for older forest workers, $15 million for a new short-term employment program, $12 million for skills training and $2 million for a job placement coordination office.

“We fully support the government’s current actions to assist forest workers," O'Rourke said. "It may mean a short term setback for local special projects, but this funding will by far reach and benefit more workers and communities through these challenging times.”

Wilkinson said 338 applications totaling $35 million were submitted for a share of the $25 million by the deadline for the most-recent intake.

But in a statement issued later Tuesday, Donaldson said the applications will be retained "so that the good work done by applicants will not be lost and can be considered when the program is continued."

"I know this reallocation of funding is disappointing for many communities, but there has not been another industry in British Columbia that has experienced significant job loss of this nature - as forestry is the major employer in many Interior communities, we are reallocating these funds where they are most urgently needed," Donaldson also said.

- with files from Mark Nielsen, The Citizen