It's been one thing after another for Devin Hartney recently. He's only 26 but needs a liver and kidney transplant after years of liver deterioration that was discovered when he was just eight years old.
Apr 14, 2021 6:00 AM By: Christine Hinzmann 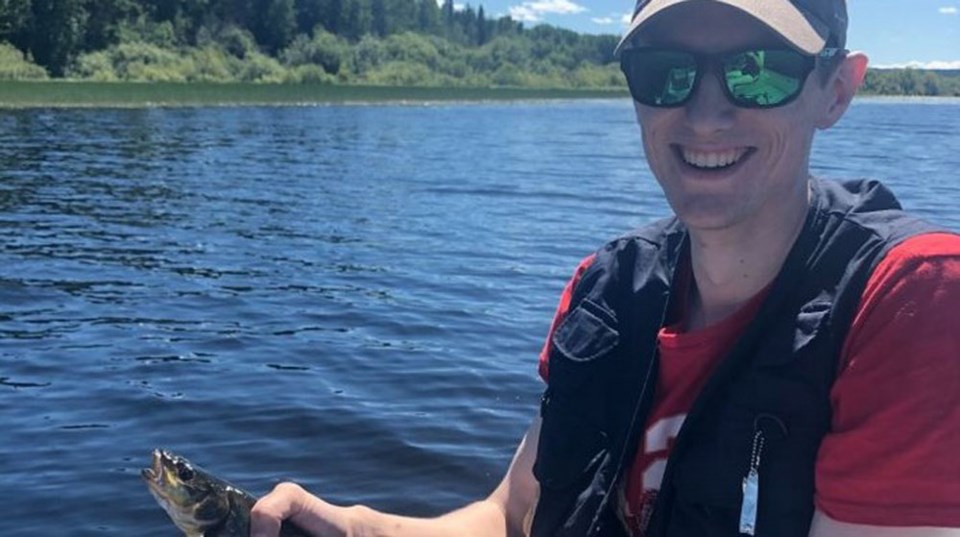 It's been one thing after another for Devin Hartney recently.

He's only 26 but needs a liver and kidney transplant after years of liver deterioration that was discovered when he was just eight years old.

Then just last week he had another health crisis that sent him to Vancouver for life-saving emergency treatment.

When he passed out from the pain, Hartney was rushed to the hospital where it was discovered he was bleeding internally at an alarming rate.

As time was of the essence, the decision was made to fly Hartney to Vancouver General for emergency surgery.

His spouse, Samantha Childs, updated The Citizen with the latest news and said Hartney had many blood transfusions to keep him alive during transport and then during treatment.

"We almost lost him a couple times," Childs said.

The experts couldn't go the less invasive route to discover where Hartney was bleeding from and finally did major stomach surgery where they removed 18 litres of fluid, Childs said.

"The whole incident happened Friday and he was woken up on Monday with no recollection obviously of what happened over the weekend because he was sedated the entire time and he was on a ventilator," Childs explained. "He knew it was a bad situation but he had no idea the severity of it so I filled him in and he was a little shocked by it but then when he found out about the crazy amount of support from friends and family from back home and the go-fund-me - people are doing bottle drives and raffles online and he's had donations of all sorts and it's incredible the amount of support the community has shown and that definitely has raised his spirits."

He's doing really well right now and lots of friends are reaching out to him and it's really nice to see, she added

"He's skin and bones and very weak right now but he's on the mend," Childs said. "He's sitting up and walking a little bit and eating on his own now."

Hartney was recently released from hospital and then the couple took two days to travel back to Prince George.

"Next there will be physio and follow up, we're just taking things one step at a time," Childs said. "He was put on the liver transplant list at the beginning of March and his kidney isn't working as well as it should be and we're just waiting to hear from the kidney transplant list team."

Hartney was born with congenital hepatic fibrosis that affects the liver and then about three and a half years ago he was diagnosed with MPGN, a very rare auto immune disease that attacks the kidney.

When it was discovered that Hartney's liver and kidneys were declining to the point of needing a double transplant, a family member started a go-fund-me page because although the cost of transplants are not out out-of-pocket for Canadians, the medical equipment, medications and the stay in Vancouver for at least three months for follow up is not covered. The goal for the fundraising effort was $10,000. Right now they've got more than $16,000, which offers a nice cushion if recovery takes longer than anticipated. There are a lot of variables that go with a two-organ transplant.

Recipients of transplants must stay near their specialist as issues may arise and medications have to be adjusted. Having a double transplant would be best for Hartney because anti-rejection medications take a toll on the body's other organs and with kidneys already compromised it's best if both transplants are done at the same time. To have the go-fund-me money to help alleviate the financial burden is of great comfort to Hartney and Childs who are both not working right now. Hartney is too sick and Childs is his full-time caregiver, which is also part of the  requirements for post-transplant care.

Luckily the couple is living with Childs' mother so there's no burden of household expenses or a mortgage to worry about.

The funds will not be used for this recent trip, Childs said. She knows when the time comes for the transplant, the stay in Vancouver will be expensive and could go longer than anticipated so the funds raised will be used for all the incidentals of the transplant.

"It's definitely raised Devin's spirits to know that he has the support from family, friends and the community," Childs said. "We just really want to say thank you. It's quite amazing."

To donate to the go fund me, visit https://ca.gofundme.com/f/devin-hartney-transplant-help.