It’s impossible to describe Mary Gouchie’s incredible life in a few simple words, but those who knew Mary are quick to describe her smile, her sweetness, and her ability to connect with everyone she met.

She was Lheidli T’enneh’s eldest elder and one of the last fluent speakers of Lheidli T'enneh dialect of the Carrier Language.

Mary was known for her tireless work to preserve, protect, document, and promote the use of the Dakelh.

“A pinnacle of strength and resilience” 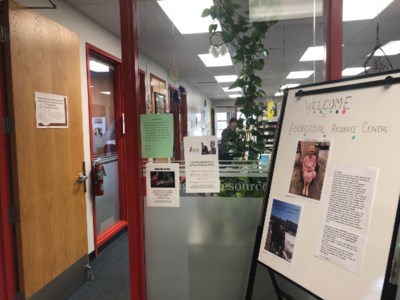 A tribute to Mary Gouchie is on display at CNC's Aboriginal Resource Centre. (via Hanna Petersen)
Mary passed away after a short battle with cancer at the age of 97 on Jan. 24.  She was the matriarch of a large family having 33 great-grandchildren and several great-great-grandchildren.

“My grandmother was, to me, a pinnacle of strength and resilience,” says Gouchie.  “She had a really hard life. She lived in pretty severe poverty. Her mother was blind.”

Mary was born Feb.15, 1921 and when she was very young she lived on the north side of the Shelley reserve.

“It was during the time of the great depression so my grandmother learned how to set snares, she learned how to shoot a gun, to pick berries, to cook and sew. She was the eyes of her mother,” says Gouchie.

Later in life, after she got married, she lived in the Island Cache and continued to work very hard. She worked in camp jobs, cooking, and most notably she was one of the head housekeepers at the Inn of the North.

“She was one of the first people to retire from that position. She would tell stories about how she would have to walk to work every day through all kinds of weather,” says Gouchie. “All along she has always maintained her language and her connection to our community stories through her mother.”

Gouchie says she has always included her grandmother’s knowledge into her career as an artist and a musician.

“I have many archived audio and video clippings of her telling stories and her translating phrases and words for me that I have incorporated into my music and that I will continue to diligently,” says Gouchie.

“I would work on song ideas with her. I would sing to her and tell her this is what I have created, and she would just smile and was so proud.”

“Her contribution to language revitalization is immeasurable”

Gouchie says as the years went on it became harder to have a conversation with people in the Lheidli T’enneh dialect.

“There are so few people who even speak it or understand it,” says Gouchie. “She was losing some of her words because of not being able to have conversations with people.”

Mary was deeply committed to language revitalization, and her contributions make up the foundation of two language courses at the College of New Caledonia (CNC).

She began going to CNC when the college started running Aboriginal Studies classes and would share her life story with the students and encourage them to learn the language. 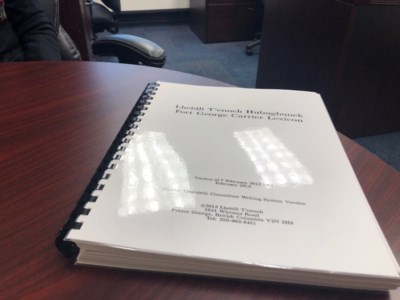 Lheidli T'enneh Hubughunek Fort George Carrier Lexicon (via Hanna Petersen)
“Her contribution to language revitalization is immeasurable and it will be her legacy,” says Marlene Erickson, CNC’s director of Aboriginal Education. “She has left a significant amount of work for the community to pick up and continue to work on.”

“When you look at this dictionary there is a lot of long hours of just saying the words and pronouncing them for the linguist, Dr. Bill Poser, and translating and making sure they are spelled correctly.”

Erickson says that it was amazing that even though Mary was well into her 90s she would make the effort to come to the college to be with the students.

“When Bill Poser went to visit her at the hospice she said, ‘Bill did we get all the words down?’ And I cried when he told me that because it shows what a selfless person she was,” says Erickson.

Darlene McIntosh, Lheidli T’enneh elder and cultural advisor at CNC’s aboriginal resource center would pick Mary up for their monthly potluck where she would do the lunch prayer in the Lheidli T'enneh carrier dialect.

“She held herself in such high esteem. You just automatically took a liking to her, you automatically respected her,” says McIntosh. “How many people did this woman touch? Not only the Lheidli T’enneh community but the Prince George community as a whole.”

“She was an incredible human”

Her granddaughter Kym Gouchie says the outpouring of condolences her family has received since Mary’s passing is overwhelming.

“She was just an incredible human. It’s only now that I am learning the vastness of her life and who she connected to like how far her teachings have reached and just her presence and her sweetness” says Gouchie. “It’s pretty darn incredible.”

Gouchie says she would like to see Mary remembered through a scholarship or bursary for First Nations studies students who wish to learn the language and would like to see a coffee table book that illustrates her life.

“I have to remind myself to stay present and to breathe and to imagine her sitting in her chair and crocheting and that sweet smile on her face and just knowing that she is at peace right now.”

In lieu of flowers, Mary’s family would like you to consider making a donation to the Prince George Hospice in her name.