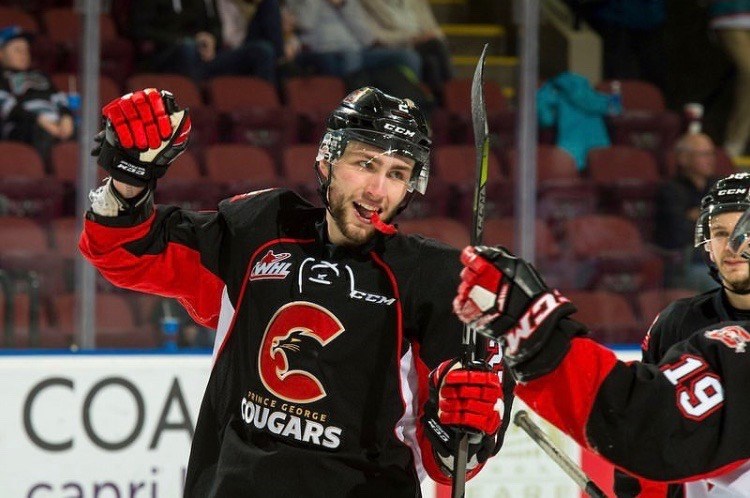 Put yourself in a young man’s shoes on the day of an NHL Draft.

It’s the final round and there are less than 25 picks left; are you confident that you’re going to get selected?

We asked that very question to Prince George Cougars defenceman Cole Moberg, who was getting anxious in the moments before his name was called by the Chicago Blackhawks in the seventh round with the 194th pick.

“Personally, I kind of thought that I might get drafted, but as I was watching it, I was trying not to think about it or worry about it,” said Moberg to PrinceGeorgeMatters. “Once it got to the end, it started to sink in like ‘Oh, maybe I’m not going to get drafted.’ So that put a little bit of stress on me, but then once my name was called, that all went away and it was just pure joy.”

He was in North Vancouver with his family while the draft was taking place across the Lions Gate Bridge at Rogers Arena, patiently waiting as long as he could.

“I was just at home watching TV and then I got a call from my agent right before their pick was in. As I was on the phone with him, Chicago called me and told me they picked me. It was a scout that I was talking to throughout the year that gave me the call. I was with my family and I was shocked that it happened. I didn’t really know what to say or what to do. I was just happy.”

Thank you to the @NHLBlackhawks for drafting me! Excited to be apart of an amazing organization! Thank you to my family, friends and coaches who have supported me to this day!

The 18-year-old was the only Cougar drafted this year despite Taylor Gauthier having a high ranking among North American goaltenders by NHL Central Scouting.

Moberg was passed over himself in the 2016 WHL Bantam Draft, explaining he understands the feeling Gauthier may have had Saturday evening (June 23).

“That was a big shock to me,” he said. “He’s one of my best friends on the team, so when we were going through it together this year, I was hoping that we’d both get drafted. But now that he didn’t get drafted, I know he’ll be working that much harder to get there. I’ve always said, wherever he goes, they’re going to want to sign him because they’re not going to want to lose his rights. He’ll have a fire lit underneath him for sure.”

Last season, the North Vancouver product scored the third-most points on the Cats’ roster with 40, which included 13 goals and 27 assists across 61 games.

Moberg, who was one of six total picks by Chicago at this year’s draft, adds his call to the big league will bring an extra edge to his game as well as experience.

“This motivates me a lot,” he said. “It’ll bring a lot of confidence to me and I’ll just put that onto the ice going into next season. I also want to help the draft eligible kids this year and help them put them through what they can expect and lift them up and be prepared for the next season.”

Our final selection in the 2019 #NHLDraft is Canadian defenseman Cole Moberg!#Blackhawks pic.twitter.com/dEW0cJq679

The Chicago Blackhawks drafted former Prince George Cougar defenceman Dustin Byfuglien in 2003, so Moberg is aware of the history the franchise has in developing strong offensive blue-liner.

“I paid attention to them growing up, obviously with a few Stanley Cup runs they had, it’s hard not to watch. The D-core they’ve had there over the years with the likes of [Duncan] Keith and [Brent] Seabrook, you know, those were two guys I liked to watch. The fact that they’re an original six franchise is also pretty exciting.”

Moberg will be at Chicago’s development camp next month and will continue to train in Vancouver until he takes off to the windy city.

Prince George Cougars staying in their cage for the next five years
Jun 6, 2019 2:24 PM

This Prince George Cougar is turning professional by transferring to Russia
Jun 11, 2019 7:35 AM