Province cracking down on non-essential travel

The province will be cracking down on non-essential travel later this week, Premier John Horgan announced on Monday. The current public health measures in place will be extended until May 25, the day after the May long weekend, Horgan said. The B.C.
Apr 19, 2021 4:35 PM By: Arthur Williams 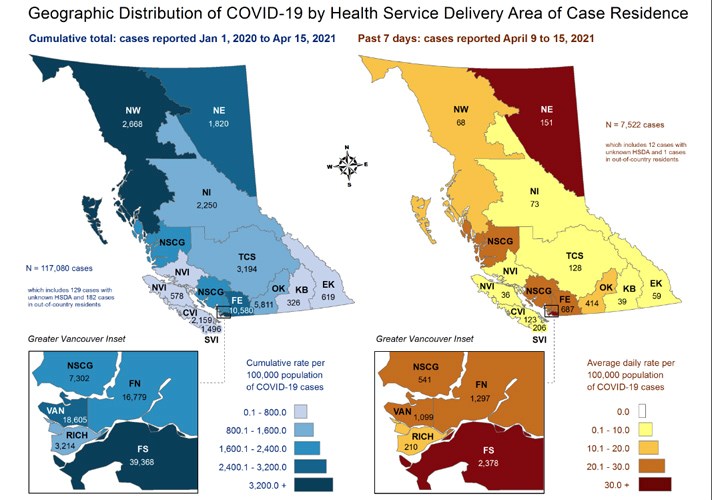 The province will be cracking down on non-essential travel later this week, Premier John Horgan announced on Monday.

The current public health measures in place will be extended until May 25, the day after the May long weekend, Horgan said. The B.C. tourism industry has voluntarily agreed to cancel existing reservations and not accept new reservations for people travelling outside of their home community for vacations or other non-essential travel during that period, he said, including out-of-province travellers.

"On Friday, (Minister of Public Safety Mike Farnsworth) will issue orders to restrict people from leaving their local health authority," Horgan said. "Stay in your territory, stay in your community. There will be a fine if you are travelling."

The province will be posting signs at the Alberta border, informing travellers that B.C. is not welcoming out-of-province visitors, campgrounds at B.C. parks will be cancelling reservations, and police will be asked to conduct random checks – similar to the Checkstop program police conduct during the holiday season. B.C. Ferries will not be allowing recreational vehicles aboard, and will be conducting similar checks for non-essential travel, Horgan said.

The goal is to crack down on those who are "flaunting the rules," not on people who live in one health authority and work in another, or have to travel for essential reasons, he said.

"All of these measures are designed with the goal of getting all British Columbians, all 4.9 million, to the end of this pandemic. It's done with a heavy heart, but a resolute purpose," Horgan said. "Our appeal to people is to do the right thing, and not plan a holiday until after the May long weekend."

Horgan urged all British Columbians to think of the medical staff who have been fighting this pandemic for over a year, and facing yet another surge in hospitalizations.

"Our nurses, our care aides our doctors have not paused to party on the beach," Horgan said. "We cannot thank them enough, but we can say, over the next five weeks, 'we are by your side.'"

Health Minister Adrian Dix said the rising number of COVID-19 hospitalizations has put pressure on the 20 hospitals in the province which are treating COVID patients – including the University Hospital of Northern B.C.

Hospitals have been forced to use their surge capacity, redeploying staff and resources from other areas to treat COVID patients, he said. That has resulted in some planned, non-urgent procedures being cancelled.

"What is happening in hospitals is effected by what we all do," Dix said.

Provincial health officer Dr. Bonnie Henry announced on Monday that the 88,000 doses of AstraZeneca vaccine available through B.C. pharmacies will be available to all British Columbians 40 years old and older. Previously the vaccine had only been available to those 55-plus, but new guidance from Health Canada has allowed the province to expand eligibility to those over 39.

The risk of blood clots from the vaccine is very low – one in 250,000 – Henry said, compared to the two to four per cent change of being hospitalized with COVID-19.

"I'm confident the benefits of this vaccine outweigh the risks," Henry said.

Evidence from the U.K. – which has administered millions of doses – shows a single dose of AstraZeneca provides excellent protection, similar to that provided by the Pfizer vaccine, she said.

On Monday, Horgan said he'd gotten his shot of AstraZeneca a couple days ago and was feeling fine.

In addition to expanding the pharmacy-based vaccination campaign, the province will be using 75,000 of AstraZeneca from the U.S. to conduct immunization clinics for everyone 40-plus in high-risk communities, including Dawson Creek.

Information from the U.K. and Israel, which are ahead of Canada in their vaccination campaigns, shows that within 14 to 21 days of immunizing a population, case numbers drop significantly, Henry said.

"By the end of April, we expect to see a decline in transmission," Henry said.

B.C. saw eight new COVID-related deaths over the weekend, including three new deaths in the Northern Health region. The province's death toll from the pandemic rose to 1,538, including 136 people in the north.

The pandemic also claimed its youngest victim yet in B.C., Henry said.

"We had a child with COVID, under the age of two, who died, she said. "It reminds us of the vicious nature of this virus."

While the child, who lived in the Fraser Health region, had pre-existing health conditions, "it was the virus that killed the child," she said.

"It is an unusual event," Henry said. "It is a true tragedy."

The Northern Health region saw 100 new cases of COVID-19 over the weekend, according to data released by the B.C. Centre for Disease Control.

The number of active cases in the north dipped below 300 to 390. Fifteen people remained in hospital in the region with COVID-19, including 10 in critical care.

A total of 71,069 doses of COVID-19 vaccine have been administered in the north, including 2,911 second doses.