Province closing in on 75% vaccinated goal 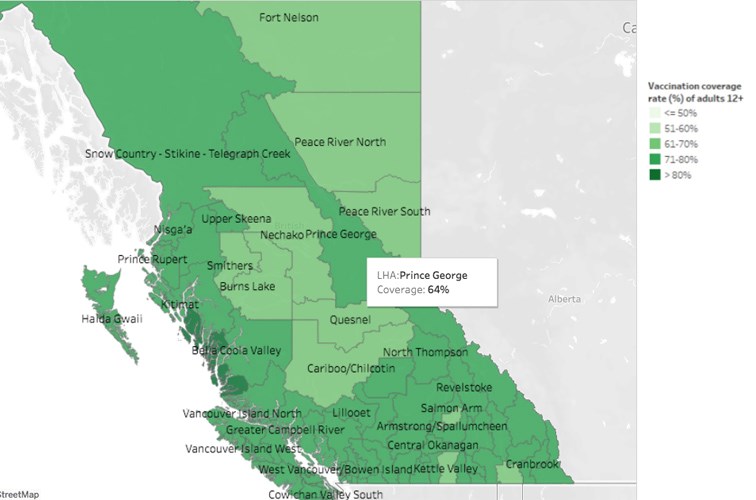 British Columbia is closing in rapidly on the target of vaccinating 75 per cent of the eligible population.

"Today, we are reporting that 74.2 (per cent) of all adults in B.C. and 71.9 (per cent) of those 12 and older have now received their first dose of a COVID-19 vaccine," Henry and Dix said. "It is very encouraging to see a steady increase in the number of people in our province who are protected with a COVID-19 vaccine. And now, more and more people are fully vaccinated with both of their doses."

As of Monday, the Prince George local health area – which includes Mackenzie and the Robson Valley – had a vaccination rate of 64 per cent, for those 12 years old and older, according to the B.C. Centre for Disease Control.

In the Northern Health region, a total of 164,362 doses  – 145,440 first doses and 18,922 second doses – have been administered, according to data released by the B.C. Centre for Disease Control. Those numbers don't include vaccines delivered by the First Nations Health Authority.

While the vaccination rate is rising, the number of new and active cases of COVID-19 is in decline. Henry and Dix reported 165 new cases on Tuesday, of which only five were from the Northern Health region.

No new COVID-related deaths were reported on Tuesday, leaving the province's death toll from the pandemic at 1,722 – including 153 residents of the Northern Health region.

As of Tuesday, there were 71 active cases in the Northern Health region, down from 79 on Monday, according to the B.C. CDC. Nine people in the north were hospitalized with COVID-19, including four in critical care.

Since the start of the pandemic, there have been 7,724 cases of COVID-19 reported in the Northern Health region, of which 7,449 people have recovered.

Residents who received the AstraZeneca vaccine started to get their notifications to book their second doses this week.

"For those who received the AstraZeneca vaccine for your first dose, you have a choice. There is no wrong choice to make. Whether you choose a second AstraZeneca vaccine or have an mRNA vaccine instead, all of our vaccines are safe and highly effective," Henry and Dix said. "Take the time to think through your options so you are ready when your eight weeks come up, and it is your turn. Whether you return to your pharmacy or go to a mass clinic for an mRNA vaccine, there is enough vaccine for everyone."

"There is so much to gain from the progress we are making, so let's keep pushing to get as many people as possible fully vaccinated as soon as we can," Henry and Dix said.