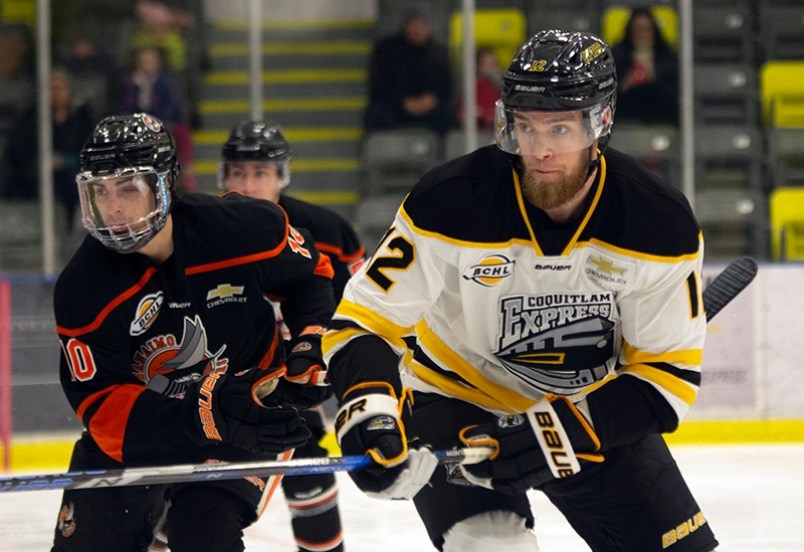 Ethan O'Rourke of Prince George seen here as a member of the Coquitlam Express in the BCHL. (via Glacier Media)

He spent time as a Cougar and a Spruce King in his hometown before eventually boarding Express in Coquitlam this past season.

Now, Ethan O’Rourke could become the next tiger king… in university hockey.

The Prince George product has formally committed to playing on Canada’s east coast for the Dalhousie Tigers for the Halifax school’s 2020-21 campaign.

“Dalhousie has an extremely impressive athletic department,” said O’Rourke in a team statement.

“I am beyond excited to begin my U SPORTS journey playing for the Tigers.”

The 21-year-old joined the Coquitlam Express around mid-season, but immediately made an impact with 26 points in 31 games, including 16 goals.

He suited up for 57 games in a Prince George Cougars’ sweater before getting traded to Everett in January 2018.

After getting shipped to Swift Current the next season, his rights to the Prince George Spruce Kings were traded to Coquitlam for the start of the 2019-20 season.

The Express were the BCHL regular-season champions this year and swept Langley before the season was cut short by COVID-19.

Dalhousie finished last in the Atlantic University Sport division for men’s hockey with a regular-season record of 8-22.

O’Rourke plans to work towards a Bachelor of Science while playing for the Tigers.