It's a large payday indeed

Andy and Marlyne Dumoulin have more than two million reasons to smile.

Marlyne is the winner of the largest slot machine jackpot in Canadian history, which she won at Prince George's Treasure Cove Casino. She picked up a $2.1-million cheque this afternoon (July 18) at the B.C. Lottery Corporation's (BCLC) head office in Kamloops. 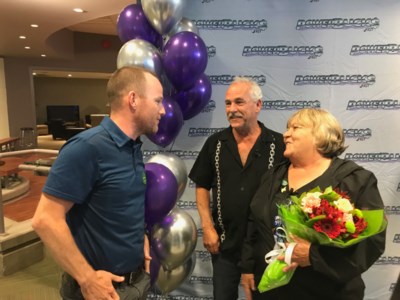 The Dumoulins meeting the man that installed their lucky machine. (via Brendan Kergin)

"I won $300 on one spin, so I said, 'Marlyne, you go ahead, spin the next one' because we had three free spins," Andy says. "And it stopped on jackpot bonus."

"All the sudden our machine just died," Marlyne adds.

"And we were surrounded by security guards," Andy says. "We didn't know (what had happened)!"

A light had gone off on the machine, but it wasn't a big, bright display. Staff knew what was going on though.

"It was no time at all they were surrounding us downstairs," Andy says. "The guy said he just about spit his coffee out of his mouth when he found out that machine won."

At first, Marlyne didn't realize how much she'd won, thinking at first it was $2,100. Staff explained that there were a few more zeros involved.

Now that they're millionaires, the couple is planning to travel. Andy was a truck driver (he was planning to retire in 10 months), driving between Langley and Prince George.

The two are planning to road trip in the near future, having already purchased a motorhome. They'll be headed to a family reunion in Edmonton this week.

BCLC notes those who play have a chance to win the Powerbucks $1 million or more progressive jackpot, which grows as more people place a bet across other participating Canadian jurisdictions, including Manitoba, Quebec, New Brunswick, Nova Scotia and P.E.I.

The Crown corporation says a portion of every wager gets added to the progressive jackpot until there is a winner.

“Celebrating a record-breaking Powerbucks jackpot in British Columbia is a thrilling occasion for our players,” says Brad Desmarais, vice-president of casino and community gaming, in a press release. “On behalf of BCLC, I’d like to congratulate Marlyne on her win at Treasure Cove Casino in Prince George.”

— with files from Brendan Kergin