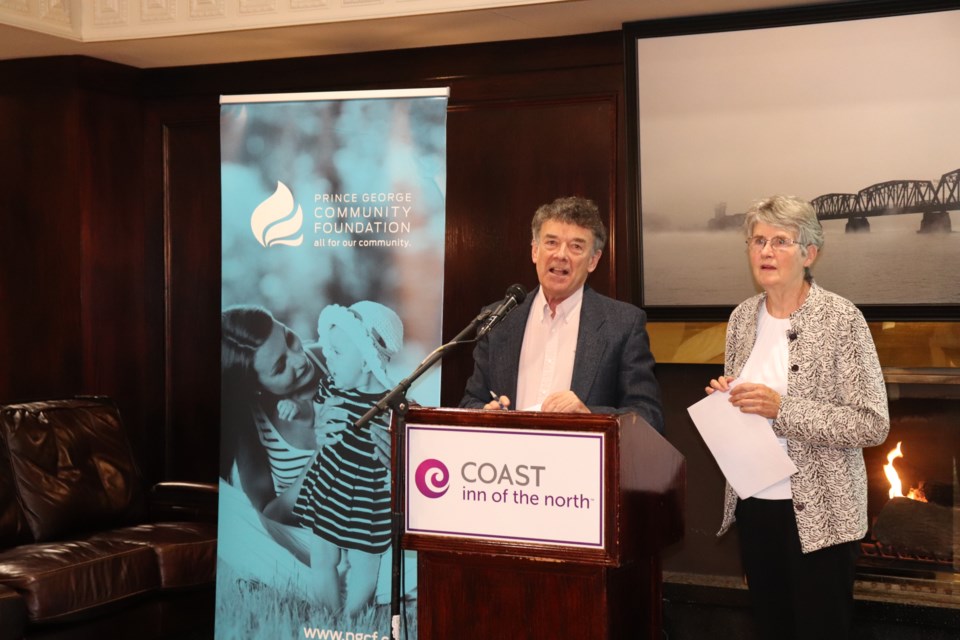 Ted Price and Anne Laughlin announce the Miracle Theatre partnership with the PG Community Foundation at the Coast Inn of the North (via Hanna Petersen).

This year, they'll be donating all proceeds from their 2019 production to the Prince George Community Foundation to establish the “Children of Prince George Fund.”

The investment income from these funds will be dispersed annually to Prince George charities that help the development of children in the community.

“The philanthropic approach that Ted and Anne have brought to Prince George is just unbelievable,” says Mayor Lyn Hall, who spoke at Miracle Theatre’s announcement at the Coast Inn of the North on Tuesday (Sept. 25).

“The city has a granting program and every year it is oversubscribed; you can only do so much with tax dollars from a granting perspective. There are organizations in this community that can’t fulfil their obligations and Ted and Anne have filled some of that void.”

He noted School District 57’s hot meals program as one example of a program working to assist children in need.

“By donating this money to the community foundation, to help children in our community, I cannot thank you enough,” adds Hall.

For their upcoming production, Miracle Theater has obtained the rights to the play Halfway There by Norm Foster, Canada’s most produced playwright. The fundraising goal has been set at $55,335.58.

“And while raising these funds, it’s again also our goal to contribute to our city’s arts; and at the same time, bring people a whole lot of fun and pleasure,” says Laughlin.

The play will be produced by Laughlin and directed by Price. The duo is recruiting actors nationally, as the cast is being contracted with the co-operation of Canada’s Actor’s Equity Association.

Although they’ve only just announced their latest production, Miracle Theatre already has 12 per cent of the project funded by two anonymous sponsors and Scotiabank.

The play will take place from Feb. 28 to March 20 in Art Space, above Books and Company (owner Owen Lubbers has donated the space). It's located at 1685 Third Ave.

Tickets for the play will be available at Books and Company and cost $33.