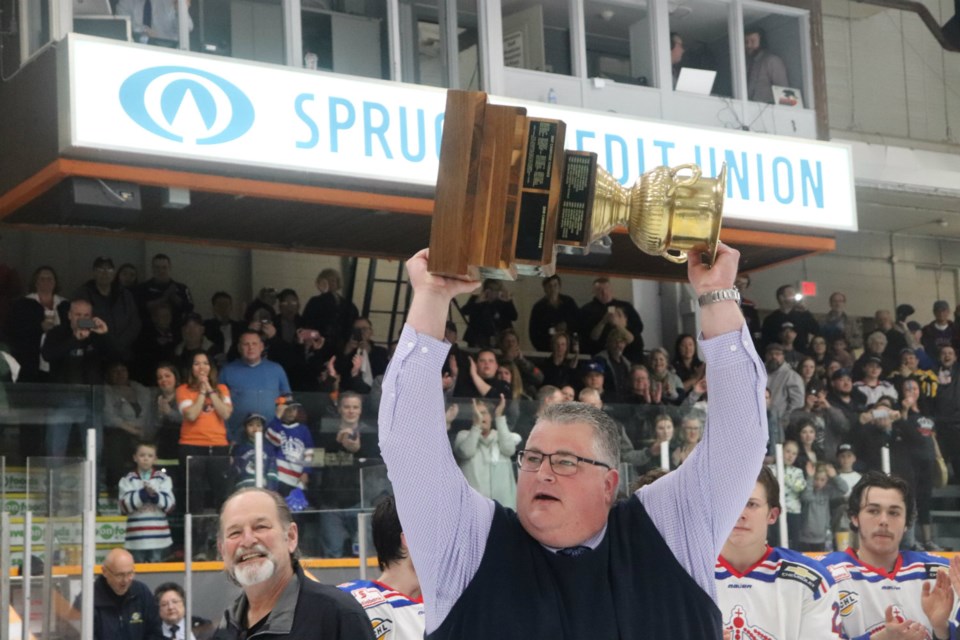 After 15 seasons of dedication to the community-owned hockey club, one of the men behind the curtain of the Prince George Spruce Kings played a critical role in bringing a pair of trophies to the Rolling Mix Concrete Arena (RMCA).

General Manager Mike Hawes was honoured for his work in the Spruce Kings’ front office by the B.C. Hockey League (BCHL) after putting together a team that went on to win its first-ever Fred Page Cup in the team’s near 50-year history.

All that hard work was recognized at league meetings on Thursday (May 30) when he was presented with the award as the BCHL’s Executive of the Year.

“It’s been a very long time,” said Hawes to PrinceGeorgeMatters on May 4 when his team raised the Doyle Cup on home ice, also the first regional title in Prince George’s history. “I’ve been here for a lot of years and we’ve made it work to get the program to where it is and I’m just happy for the group. It takes a lot of people putting in a lot of hard work over the years to get us here, and you know what, we’re not done yet.”

Hawes spends countless hours making sure the Spruce Kings are good to go before, during, and after each season, solidifying rosters, negotiating trades, and making sure the boys have everything they need to win as a team.

His efforts, along with the help of the coaching staff and the will of the players, got Prince George into its second National Championship final appearance, and their first since hosting the tournament in 2007.