New housing construction in Prince George doesn’t seem to be affected by COVID-19, according to new stats from the Canadian Mortgage and Housing Corporation (CMHC).

The same goes for those across Canada as national housing starts increased by seven per cent month-over-month to 262,396 units in August at a seasonally adjusted annual rate, according to the CMHC.

This represents the fourth consecutive monthly increase and the fastest pace of national homebuilding since 2007, pushing up the six-month average to 213,144 units.

In B.C. specifically, housing starts increased by six per cent month-over-month to 44,883 units in August, following an increase of 42,883 in July.

The increase was primarily driven by the multi-unit segment and housing starts in August were above the pre-COVID level.

In the near term, CMHC says to expect housing activity to continue to be supported by sales that occurred prior to the pandemic and historically low borrowing rates.

Meanwhile, the value of residential building permits was down sharply in July by 34 per cent. But, compared to the same time last year, housing starts were up by 23 per cent. 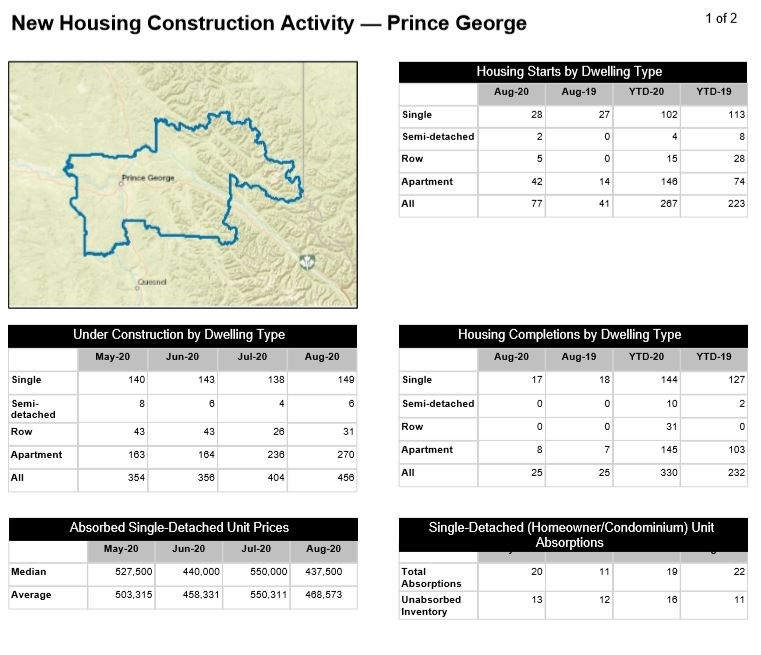 In August 2019, the city only saw 41 new housing construction starts.

Other areas of the province are also seeing increases like Vancouver, where housing starts were up by 50 per cent compared to last year, and Victoria has seen a 64 per cent increase compared to August 2019.

In Kelowna, however, housing starts were down 55 per cent.

While new housing construction is continuing despite the pandemic, COVID-19 has affected housing prices.

Because of social distancing, the number of active listings has been in decline, putting an increase in demand on the market and driving home prices upwards.

The Bank of Canada estimates that those deferrals have prevented a spike in mortgage delinquencies and have flooded motivated sellers into the market.

BCREA says because of this and despite new listings normalizing, the total supply of homes remains both reasonably low and well below past recession peaks.