A second cannabis retail outlet on George Street has been denied operation.

Just steps away from the existing Grasshopper Retail Inc., Epik Products Inc. for Healx Medical Corporation Inc. applied for a temporary use permit which would allow them to operate a cannabis store at 356 George St. in the old Long & McQuade building.

However, because the building is only 60 metres away from an existing cannabis store, and close to a number of downtown social services, Prince George city staff recommended council deny the application.

Epik Products did successfully complete the financial integrity check and security screening required by the Liquor and Cannabis Regulation Branch (LCRB) for a non-medical cannabis retail store and had many security measures in place.

They also updated the façade of the building designed to match the aesthetic of other businesses in the area.

When it came to a discussion during last night’s meeting (Sept. 14), council was divided on the issue.

“These ones are tough,” said Coun. Terri McConnachie. “This is a drawback of the flexibility that one-offs give us is that there isn’t really a strong framework.”

McConnachie then noted she would support the temporary use permit as she doesn’t want to stop small businesses from competing against each other.

Letters of opposition submitted by Grasshopper Retail, North City Donair, CrossRoads Brewing and other businesses asked for an update on a June 24, 2019 motion made by council to create some structure for distance regarding cannabis retails.

However, general manager of planning Ian Wells clarified that the motion was in reference to the distance between cannabis retail stores and schools, not between competing businesses.

“We still believe in reviewing them on a case-by-case basis,” said Wells, saying to go back now and create a 1.6-km distance rule, which is in place for liquor stores, wouldn’t be feasible.

“That would create a lot of problems because the temporary use permits in place now are closer than 1.6 km.”

“I don’t want to get involved with saying one business can’t compete against each other, so I’m really having a tough time with this one,” said Coun. Brian Skakun, who then moved to have the temporary use permit changed from the standard three years to just two years.

Coun. Cori Ramsay said the issue wasn’t about small businesses competing against each other, but rather it's downtown location. 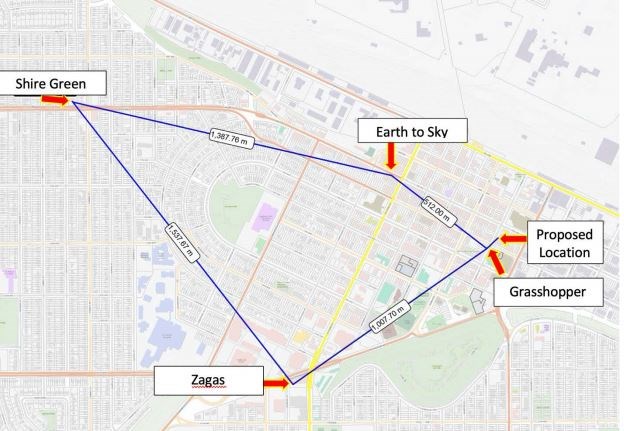 “There’s a location within 60 metres and there’s another one in 500 metres. We have so many issues downtown. I just have concerns over adding one more before we get information back on how this is impacting our downtown,” said Ramsay.

“We haven’t got a report back on how the existing ones are affecting our downtown, so how can we add another one?”

Mayor Lyn Hall also said he was concerned with this location and would be supporting administration's recommendation to deny it.

“I will tell you I have concerns about this particular location. I have a concern about the number of cannabis outlets in downtown. I therefore, will be supporting the recommendation from the administration.”

When it finally came down to a vote, both the motion to approve the temporary use permit for 356 George St. was denied.

Mayor Hall and Councillors Ramsay, Frank Everitt and Susan Scott were opposed, while Coun. McConnachie, Skakun and Garth Frizzell were in favour.

Coun. Murry Krause, who would have been the deciding vote, was absent.