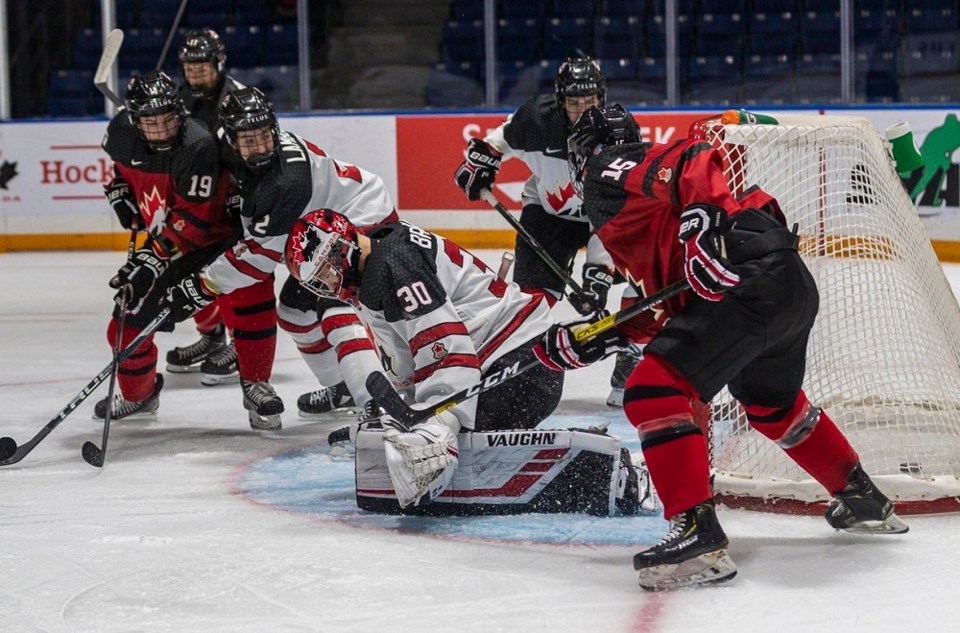 Prince George Cougars' Tyler Brennan (#30) makes a save for Team Canada White at the 2019 World Under-17 Hockey Challenge. | Hockey Canada

Tyler Brennan will soon represent Canada on the international stage once again.

The Prince George Cougars goaltender has been chosen as one of three to don the maple leaf at the 2021 Under-18 World Hockey Championship starting later this month.

The tournament is set to take place in the United States in Frisco and Plano, TX., from April 26 to May 6.

"Prior to travelling to Frisco on April 17, players and staff will self-isolate at home starting April 12 and will be tested for COVID-19 three times," reads a statement from Hockey Canada this morning (April 1).

"Upon arrival in Texas, all team personnel will enter a four-day quarantine at the hotel before starting a pre-tournament camp on April 21."

Canada's World Under-18 team includes nine WHL players, including two goaltenders with Brennan and Thomas Milic of the Seattle Thunderbirds.

Brennan last played for Canada at the 2019 World Under-17 Hockey Challenge with its 'White' team (seen in the photo above).

In four starts, the 17-year-old Winnipeg, Man., product finished 2-2 with a .872 save-percentage (SV%) en route to a fourth-place finish in the eight-team event.

Brennan also got Prince George its first win of the 2020-21 B.C. Division season on Monday night (March 29) in a 5-3 victory over Victoria.

The Cougars have been rescheduled to play tonight, 7 p.m. in Kamloops against the Blazers as the WHL moved the originally scheduled Sunday (April 4) match as a result of the Rockets moving into a 14-day COVID-19 suspension.

Four Kelowna players and three staff members received positive tests in the past two days, which resulted in the postponement of 10 hub games including the Cougars' April 2 and 10 contests with the Rockets and last night (March 31) against Vancouver 'out of an abundance of caution.'