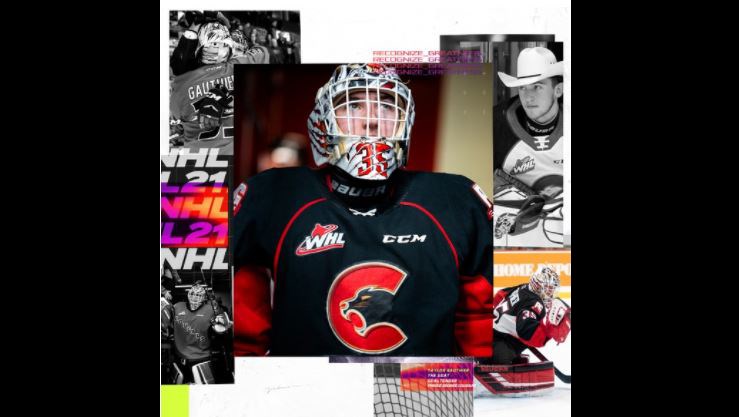 Taylor Gauthier has received many accolades during his time as a Prince George Cougar.

He can now add ‘cover athlete’ to his resume after being announced today (Oct. 16) for the team’s limited-edition EA Sports NHL 21 video game for PlayStation 4 (PS4) and XBOX.

The 19-year-old is predicting a ‘career year coming up’ after getting passed over at the 2020 NHL Draft, the second year in a row it’s happened to the goaltender.

The cover may continue to light that fire in hopes of being an influence on young athletes.

“Like most kids growing up, I’ve always imagined myself on the cover,” said Gauthier in a news release, noting he himself is an avid video-gamer.

“I remember playing this game since NHL 06 and to be named the Cougars’ cover athlete is a nice honour.”

Gauthier was invited this past summer to Hockey Canada’s virtual Under-20 team development camp, which could eventually lead to a spot on the World Juniors roster in December.

The Calgary product has suited up for Canada on three other occasions, including the 2018 Hlinka-Gretzky Cup, which he stepped in between the pipes in the gold-medal game to claim the title.

Last year, which was a shortened campaign due to COVID-19, Gauthier tended Prince George’s net in 50 games, tied for the most in the WHL, combining for a .917 save-percentage and a 2.93 goals-against average.

The Cats’ defenceman was drafted by the Chicago Blackhawks in the final round of the 2019 draft in Vancouver.

The Cougars are set to hand out the new Gauthier covers to trick-or-treaters on a first-come, first-serve basis during the Candy Cruise starting at 4:30 p.m. on Halloween Saturday, Oct. 31.

Prince George is also getting ready for the new season, which was officially announced by the WHL this week with a Jan. 8, 2021 start date.