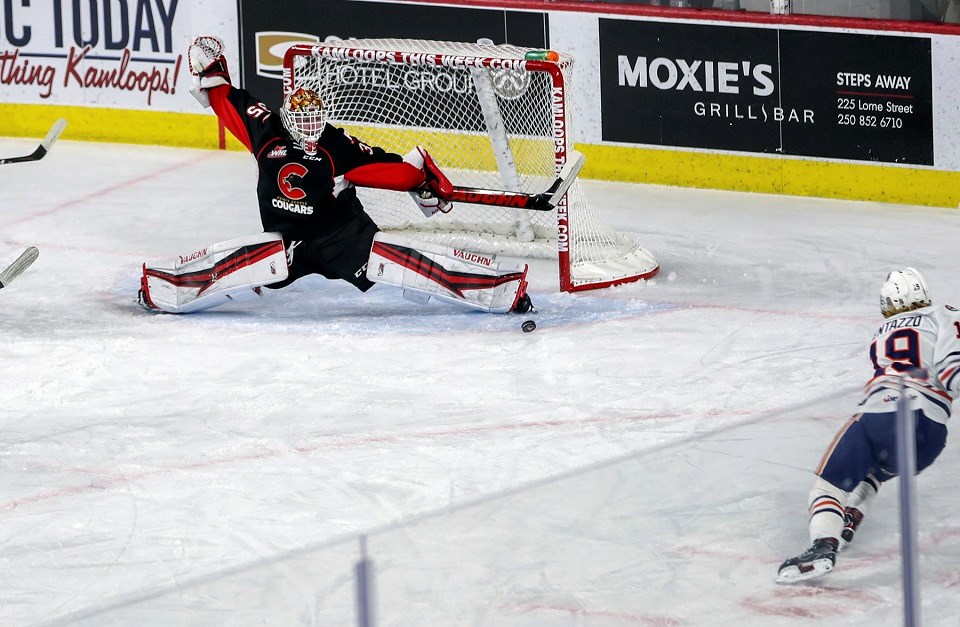 Prince George Cougars' Taylor Gauthier (#35) makes a save on Orrin Centazzo in a 2020-21 B.C. Division hub game against the Kamloops Blazers.Allen Douglas

A struggling second stanza got away from the Prince George Cougars.

Four pucks got past goaltender Taylor Gauthier in the middle period, including two in 15 seconds, ultimately resulting in a lead that could not be caught and a 6-1 loss to Kamloops, who continue to exert their multi-talented roster.

Koehn Ziemmer scored Prince George's lone goal tonight (April 1), his second of the season and of his WHL career, coming unassisted at the 17:14 mark of the first period.

That goal tied the contest at 1-1 after the Cougars gave up the first marker a third consecutive game 10 minutes prior.

"It's how you react to that first goal," he said when asked by PrinceGeorgeMatters about the Cougars' starting efforts.

"I didn't think there was a lot of momentum [tonight]. You know, we miss a check, you make a mistake, they score the first goal and it's how you react. Then we get a fluky one that should've got us some juice, but after that second period, they got the juice. We didn't get anything."

Gauthier made 36 saves on 42 shots in his second start of the shortened season, including 14 of 15 in the third period, while the Cougars managed 25 shots with just three in the final frame.

Lamb says he was fine keeping his 2021 World Junior Canadian netminder between the pipes even after that second-period surge, but says everyone needs to pitch in when the going gets tough.

"I thought he made a ton of [good] saves there, but you know, we gotta clean up in front of him. That's the biggest thing. When he makes the first save, a couple of times he had second saves, and then third saves, and then they put it in the net. He's gotta battle like everybody else."

The Cats continued to be dominant in the face-off circle with a 61 per cent win-percentage overall.

The Cougars' next match is currently scheduled for Tuesday (April 6), 7 p.m. in Kamloops to host the Victoria Royals.

However, Prince George could see some games bumped up as a result of Kelowna's 14-day COVID-19 suspension after seven total members, four players and three staff tested positive for the virus.

The WHL has said schedule updates are set to be released in the days ahead.