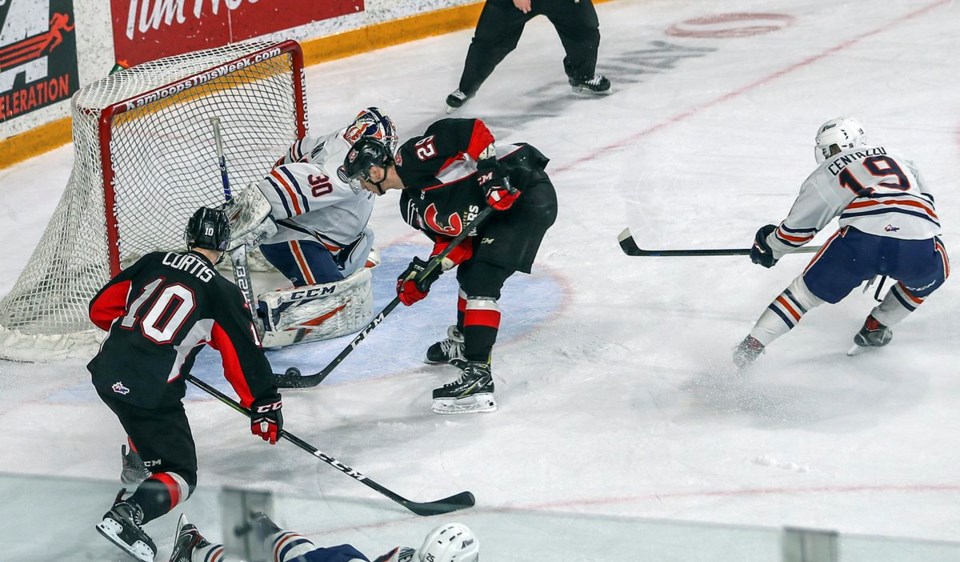 Two wins in a row!

The last time the Prince George Cougars were able to say that was early January when they beat the Kelowna Rockets in back-to-back games on home ice.

On Friday night (March 15), the Cats were able to grab a second straight win in beating the Kamloops Blazers 5-4 in overtime while on the road.

The Cougars won at the CN Centre last Saturday (March 9) 5-2 over Portland.

This also marks the second consecutive victory at the Sandman Centre for Prince George, who won a 2-1 shootout contest on Feb. 22 to break a 17-game losing streak.

Taylor Gauthier stood on his head in this tilt, stopping 26 of 30 shots between the pipes for the Cougars, recording his 15th win of the season.

Despite being snubbed for the game’s first star, Vladislav Mikhalchuk was awarded as the Western Hockey League's (WHL) first star of the night after nabbing the first four-point performance of his junior career with two goals and two assists, including potting the overtime-winner with less than 75 seconds to go.

He also had a plus-one (+1) rating and three shots in the victory.

Captain Josh Curtis also had a good night in Kamloops, recording three points for the Cougars, one goal and two assists, en route to the team’s 19th win of the year.

Both clubs went back and forth across the 60-plus minutes of ice time in front of more than 4,600 people Friday.

Rhett Rhinehart got things going with the opening goal 4:13 into the first; Kamloops tied it up at 15:02.

The Blazers gained a one-goal lead five minutes into the middle frame and maintained the advantage until the next period.

Mikhalchuk knotted the game at 2-2 on a pass from Curtis 71 seconds into the third, then the two reversed roles in allowing Curtis to score the go-ahead 3-2 marker almost six minutes later.

Mike MacLean doubled Prince George’s lead to 4-2 before the media timeout; Kamloops eventually got two straight goals at 13:39 and with 56 seconds left in regulation.

Prince George won the game in the final minute-and-a-half of the extra frame to improve their record to 19-40-5-3 with a chance to get to 20 wins in the last game of the season at home.

The victory also puts Kamloops in a difficult position as they are tied with Kelowna for that final playoff spot in the B.C. Division, which means the Cougars just have to win regardless and the Rockets to win in order to play spoiler.

This is also a chance for the Cats to end their year on a very strong note by winning three games in a row, which would be the first completion of that feat since October.

The Cougars and Blazers will duke it out starting at 7 p.m. tonight (March 16) at the CN Centre in the last game of the 2018-19 campaign.

It is also Fan Appreciation Night, where the first 1,000 fans will receive a free Budweiser or fountain pop and everyone will have a chance to win a free roof courtesy of Ridgeline Roofing.