“It makes me feel very, very proud of the community I live in”

Over 500 people came together to celebrate Thanksgiving and enjoy a turkey dinner today (Oct. 13). 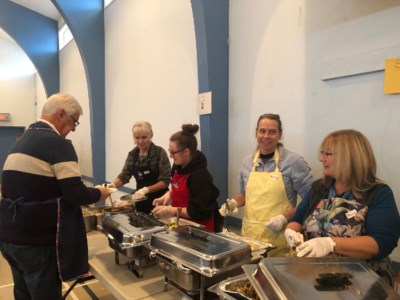 Servers dish up a plate to be brought to a guest. (via Hanna Petersen)
This marks the 43rd year, St. Vincent de Paul has served holiday dinners for the community and those in need.

“Over the years it has blossomed and we serve a community dinner for anyone who is alone or who would not be having a dinner, or who just needs to have a break and come out,” explained Bernie Goold, president of the Prince George St. Vincent de Paul Society.

“When we started the dinners off we made the decision that it would be done restaurant style — you come in and you sit down,” says Goold. She explained that serving the dinners this way helps build community, allowing everyone to mix and mingle.

“It makes me feel very, very proud of the community I live in because the generosity of people is just astounding around here.”

The culinary arts department at the College of New Caledonia (CNC) cooks the turkeys and makes the gravy and volunteers donate everything from pies to their time.

“There’re people who donate time behind the scenes to peel 220 lbs of potatoes and have been working from dawn this morning to get everything ready for 11:30 a.m. today,” says Goold, adding that the volunteers are a treasure beyond measure.

She says while they expect to serve anywhere from 500 to 600 people, they’ve had even greater numbers in the past.

“The problem is we know when it’s a nice day young families walk here but when it’s cold and chilly it’s hard to push a buggy 10 or 12 blocks,” says Goold. “We were praying for a warmer morning but at least it’s not raining and we do see children coming in and out.”

Goold says the whole emphasis of the dinner is to let the guests know they are valued and cared about.

“I just don’t mean St. Vincent de Paul I mean that the whole community cares about them.” 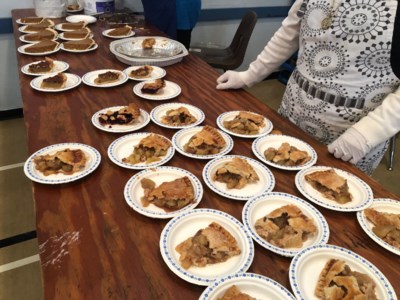 “We can’t take care of all of their needs but St. Vincent’s is trying very hard to take care of the two basic needs and that is feeding and giving them clothes,” says Goold, adding that St. Vincent is always looking for more volunteers.

She says volunteering doesn’t have to take copious amounts of time, and the drop-in center even has a few people who come in to help serve meals on their lunch break and then head back to work.