Prince George is in bear country, and, now that its Spring, it’s once again time to be extra bear aware.

City crews are installing new signs at parks and city-owned greenspaces known to be frequented by bears.

The signs are being installed at trailheads and in active bear-corridor areas.

They include information on how to stay safe in bear country and how to report a bear to the BC Conservation Officer Service (BCCOS).

This is the city’s latest initiative in its work to help keep residents and bears safe, and is part of its effort to achieve official Bear Smart community status.

The Bear Smart Community Program is a voluntary, preventative conservation measure that encourages communities, businesses and individuals to work together.

The goal is to address the root causes of human-bear conflicts, thereby reducing the risks to human safety and private property, as well as the number of bears that have to be destroyed each year. 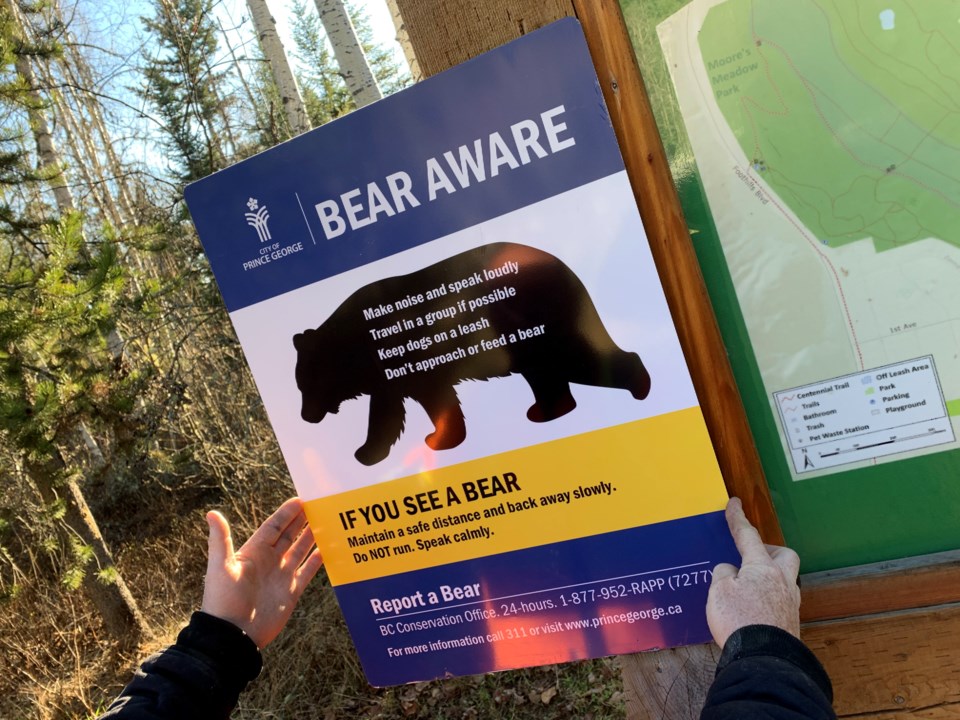 The city is installing bear signage at various parks and trails. (via City of Prince George)

Over a 10-year period up to 2018, an average of 35 bears were destroyed per year in Prince George.

According to the BCCOS, there have been an average of almost 900 calls per year to authorities to report bear sightings.

While all of Prince George should be considered “bear country” and residents should be prepared, certain areas have an increased likelihood of seeing or encountering wildlife including bears.

City staff have audited all of its parks and greenspaces to determine which areas are most prone to bear-human conflict.

In all, 79 out of Prince George’s 169 parks and greenspaces were determined to meet this criteria because of their proximity to rivers and forested landscapes.

In addition to the new signs, park staff are working to enact a number of measures to decrease the likelihood of bear-human encounters in city parks and greenspaces including:

Ensuring the city continues to maintain bear-resistant garbage cans at parks with higher numbers of bears.

The city is aiming to apply for the Provincial Bear Smart designation later this year.

The Bear Smart Community program has been designed by the Ministry of Environment and Climate Change Strategy in partnership with the British Columbia Conservation Foundation and the Union of British Columbia Municipalities.