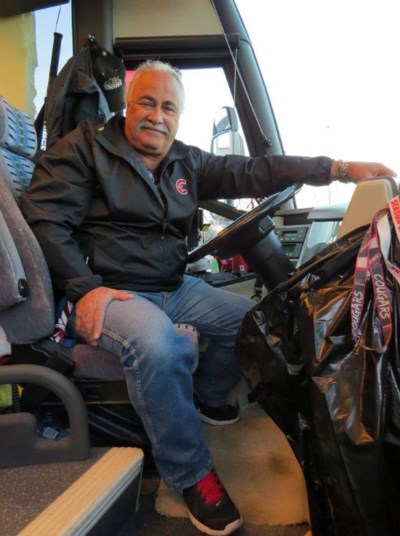 It’s got all the bells and whistles for the players, but perhaps more importantly, it has up-to-date parts and functions needed for a smooth drive on the roads.

Ralph Posteraro, the man who’s driven several Prince George Cougars on the road to other Western Hockey League (WHL) cities to compete at the highest level of major junior hockey, got a brand new Prevost coach bus today (Oct. 2) with the latest in safety technology fit for the fall and winter seasons.

This is his 20th season as the Cats’ man behind the wheel, but it’ll also be his last with plans to retire from the part-time gig.

“Meeting all the players and all the coaches we’ve had has been the most exciting part for me,” said Posteraro in an interview with PrinceGeorgeMatters. “There’s a lot of people I’ve come into contact with over the years. [...] I’ve always loved driving, I’ve always wanted to be with the team, you know, and this was a very good fit for me, getting to do part-time work in the winter time and then I like my golf in the summer.”

Prince George unveiled its new set of wheels this morning as part of a new agreement with Pacific Western Transit complete with wider seating, more leg room, outlets for plugs and USB connectors, cup holders, monitors for movies and television, and tables in the front two rows.

In terms of the actual engine function, Posteraro is thankful for the upgrades as the bus he was driving for nearly two decades didn’t have good reliability in its ladder years.

“The old bus was a great bus, but it was 20 years old, so it’ll have issues,” he said, “but this is just the latest and greatest with all the plug-ins inside and the reliability that will come with it. It’ll be a good one to drive for sure. And that’s the main thing. If the players can, like I say, get a couple more wins and be more comfortable in it, then that’s what we’re looking for.”

The Cougars are one of the most travelled teams in the WHL, driving as far east as Brandon, Man., and to other communities across B.C., and the prairie provinces.

Jackson Leppard is one of those tenured players who’s seen a lot of time on the road with his teammates with Posteraro at the helm.

“He’s done a great job; he’s such an awesome man. We all feel very safe on the bus with him and we trust him in getting us from point ‘a’ to point ‘b’.”

Warm up the bus 🚌 @PGCougars unveil its newest team bus for the 2019-20 season & beyond in a new partnership with @PWTransit | #CityOfPG @PGMatters pic.twitter.com/PxdZFiOrq0

The 19-year-old is in his fourth season with Prince George and says sleep is a huge factor in order for his team to play up to the coaching staff’s expectations.

He believes it’s also important to bond with other players while out on the road since you’re in the same space for so long.

“We do about some odd 13-hour trips and it goes a long way if you get your good night sleep in,” said Leppard. “So it’s nice to have this. [...] We do a lot of board games we got a table in the middle, and it’s going to be great to have guys sit down, play cards or whatever and make some memories and spend some time on the bus together and we’re really looking forward to it.”

So, to the next bus driver for the Prince George Cougars, Posteraro wants them to remember that even though you’re transporting players back and forth, you’re also a teammate to them.

The Cougars will get to use the new bus on their next road trip with games in Spokane and Tri-City on Oct. 11 and 12 respectively.

When the team is not using the new set of wheels, Pacific Western Transit says other hockey teams and community groups are welcome to use it by giving them a call.