Prince George and area homeowners are making their contribution to the war against the Douglas fir beetle. Taking advantage of a program being run out of the Industrial Forestry Service Ltd.
May 11, 2018 4:38 PM By: Mark Nielsen 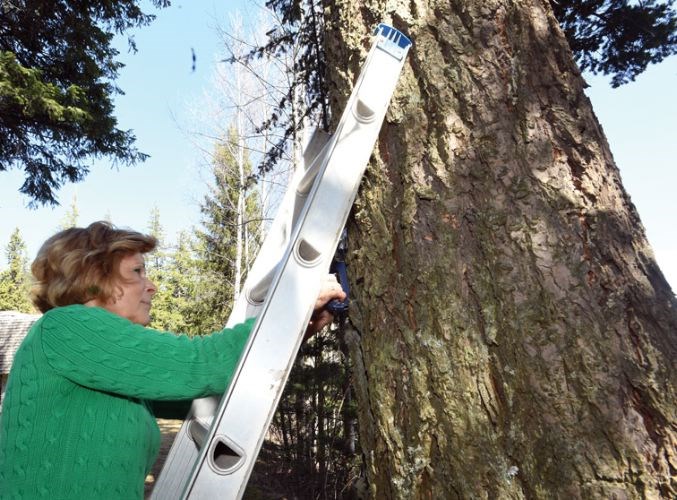 Sandra Cluff attaches pheromone reppellants in Fir trees on her property to protect them from fir beetles.Citizen photo by Brent Braaten

Prince George and area homeowners are making their contribution to the war against the Douglas fir beetle.

Taking advantage of a program being run out of the Industrial Forestry Service Ltd. office, they've purchased more than 17,000 pods of pheromone, at $1 each, in the name of protecting the trees against the bugs.

The pods remain available for purchase but those interested in buying them should move quickly and they may come away disappointed. Black said they needed to be up on the trees by the end of April to be at their most effective.

"They suggest two weeks before the start of the flight and the Douglas fir beetle will start flying when the median temperature is about 18 degrees," she said. "So even though it's a late spring, with all this heat we've been getting it's possible that they've kind of woken up and started flying."

As a result, she said there's no guarantee the pods will work against the first flight but they may still be helpful against the insect's second flight, which typically occurs in June.

The pods are available at a cut rate thanks to a subsidy provided by Carrier Lumber Ltd., Canfor, the Sinclar Group and the Northern Interior Cruising Committee. Normally, they would cost $1.50 each, tax included.

Between one and three per tree are needed depending on their size. For a grove, the pods are deployed on a grid basis. The pods emit a repellant that discourages the beetles from choosing the trees as places to lay their eggs. As a bonus, they also ward off attacks of beetles on nearby spruce trees.

For those with trees that have been hit, steps can still be taken to prevent the spread.

"If you do have trees that have been affected and you want to save the surrounding trees, you can fall them and buck them and the city will provide the chipping service for free," Black said. "You just have to get the tree to their yard."

Burning affected trees is out of the question - the practice violates the city's air quality bylaw.

"Usually the beetles will fly 500 metres, maybe 1,000 metres from their hit sites," Black said. "So just because you didn't get the repellant this year doesn't necessarily mean your trees are going to be hit."

She urged homeowners to keep an eye out for freshly hit trees.

"The beetles will always start attacking at chest height before going up or down the trunk," Black said. "So watch out for that frass (boring dust) that looks like the beetle has gone in."

Further afield, the Ministry of Forest, Lands, Natural Resource Operations and Rural Development has been using a combination of small scale salvaging, trap trees and pheromone pods to prevent the spread on Crown land, particularly in the Pidherny recreation area.

Mother Nature may also have been helpful in the form of the longer winter. Although the temperature has warmed up considerably, MFLNRO stewardship officer Alena Charlston said the trees may not be so stressed thanks to the additional water from the snowpack while the colder temperatures over the winter may have put a dent in the beetles' population.