Watrous Street resident Natalie Warren has organized a petition to try to save her neighbourhood park.
Nov 12, 2020 1:57 PM By: Arthur Williams 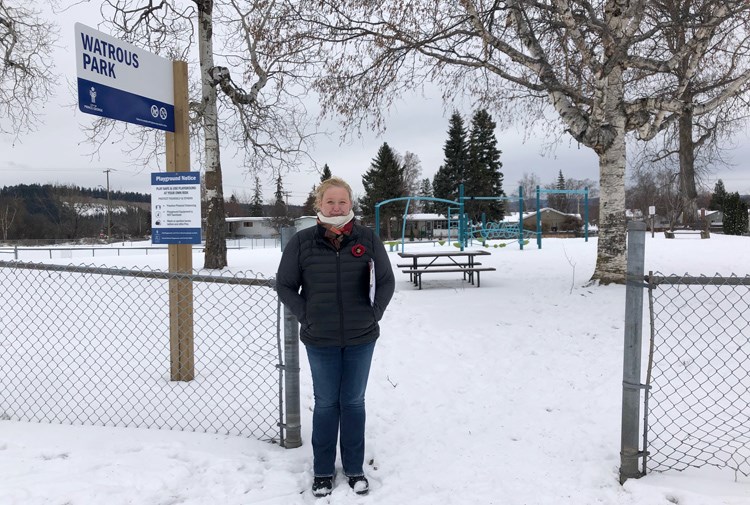 Area resident Natalie Warren organized a petition opposing the sale of Watrous Park by the City of Prince George to developers.Citizen photo by Arthur WILLIAMS

Watrous Street resident Natalie Warren has organized a petition to try to save her neighbourhood park.

The City of Prince George is considering selling Watrous Park to a developer, to facilitate the construction of a four-storey, 90-unit seniors' assisted-living complex. The city is soliciting public feedback on the proposal until 5 p.m. on Nov. 20.

"Living right beside the park, my first thought was 'we're going to be looking at an apartment, instead of the park and the cutbanks and our lovely view," she said. "Why Watrous Park? There are so many other potential building sites. There is very few green spaces left (in the neighbourhood)."

If the park is sold, the developer will need to apply for an amendment to the official community plan and then rezone the land. Warren said there is plenty of sites in the city where seniors housing could be built and be a better fit.

"We're not against seniors housing," she said. "We don't see a four-storey building, that will also be a workplace for people, fitting into the neighbourhood."

As a 20-year resident of the neighbourhood, Warren said she sees people using the park all the time. Children play at the playground, people walk their dogs their, and the Prince George Lawn Bowling Club has its bowling greens in the park.

"We've seen so many younger families moving into the area," she said. "A local daycare brings the kids there regularly over the summer."

Prince George Lawn Bowling Club president Dan Gilgan said city informed the club about the proposed sale just before it was announced the public. The club has 35 members and plays four times a week at the park between June and September, in addition to hosting occasional tournaments.

"Would we be happy if the deal didn't go through – sure," Gilgan said. "The grass we have at Watrous Park is really good grass."

If Watrous Park is sold, the city plans to build a new lawn bowling green at one of the other parks in the city, he said. Where the new facility would be, and how long it would take to be developed, hasn't been worked out yet, Gilgan said.

"It would take at least a year to build a new bowling green. The grass has to grow," he said. "Ideally what would happen is they would start development of the bowling green... in the spring, and we could play at Watrous Park this summer – if we have a normal summer."

While the club would rather stay in its current location, relocating could have some upsides.

Currently there is no washrooms or running water available at the park, he said. Depending on where the new green was built, club members may have access to public washrooms.

By comparison, the Quesnel lawn bowling club has a facility with a clubhouse, including washrooms and a kitchen.

City spokesperson Micheal Kellett said the proposed project is in the very early stages, and no decisions have been made.

"The process is at a very early stage that involves collecting comments about the prospect of such a facility from residents who live in the neighbourhood," Kellett said in an email. "Should this process move forward, it would also involve an official hearing in front of council that would be open to the public. Should the rezoning get council approval, the city would also explore building a new lawn bowling facility elsewhere in the city. Again, this is a very early stage of the development process and nothing is set in stone."