It's the light at the end of a 78-day-long tunnel: as of this week, registered voters should have received information cards in the mail from Elections Canada. Canadians will select a new federal government on Oct.
Oct 1, 2015 9:17 PM By: Charelle Evelyn 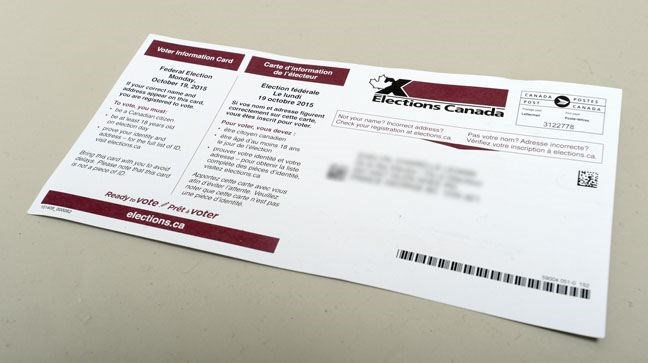 Under new rules brought in by the Fair Elections Act, bringing an Elections Canada voter information card to a polling station wont be considered sufficient identification to cast a ballot on Oct. 19.Brent Braaten, Photographer

It's the light at the end of a 78-day-long tunnel: as of this week, registered voters should have received information cards in the mail from Elections Canada.

Canadians will select a new federal government on Oct. 19, but in order to do that voters actually need to mark a ballot.

In addition to it being an election year, the issue of voting has remained at the forefront for months thanks to the Fair Elections Act coming into effect last June.

The legislation changed the identification requirements for voting in federal contests, mainly removing the ability to use the voter information card as proof of identity and changing the vouching system for those without proper ID. It also added an extra day of advanced voting.

Opponents criticized the changes - which the government touted as necessary to prevent voter fraud - as having the potential to disenfranchise groups of voters, particularly students, the homeless and aboriginal people.

The Council of Canadians, Canadian Federation of Students and three individuals filed an injunction against the new law, which was denied in July by the Ontario Superior Court.

If granted, that injunction would have allowed Canadians to use their voter information cards along with another piece of authorized ID to vote. A request to appeal that decision was also turned down, with the court citing the timing as too close to the federal election.

"The Fair Elections Act was tabled just a year before a fixed election. Our legal challenge went before the courts two months before it went into effect, but the federal government delayed the process every step of the way," said Garry Neil, Council of Canadians executive director, in an August press release. "In this case, justice delayed is justice denied."

Most Canadians won't have issues at the polls, as about 86 per cent use their driver's licence, said Elections Canada spokesperson Dorothy Sitek.

People living in group settings where they may not have a civic address, such as people living on First Nations reserves, staying in homeless shelters or students living in residence, can have proof of residence letters signed by their local administrator. Letters are available on the Elections Canada website and can be brought along with another piece of ID with the voter's name.

If a voter doesn't meet any of the criteria (don't have any pieces of correspondence with their current address), they can bring a neighbour who does have the appropriate ID and is also supposed to vote at the same the polling station to swear a written oath as to their address.

While there have been some questions about identification from those visiting the local elections office, Prince George returning officer Lorraine Grant said any issues are usually easily resolved.

"We do everything we can to give them the opportunity to search their wallet or car," Grant said of prospective voters who may not realize that their car insurance papers or library card lingering in their glove compartment or between their vehicle's seats is eligible documentation.

And even though the voter information card can't be used as identification, bringing it along to the polls can save time, said Sitek, as it allows elections workers to more quickly assess if someone is at the correct polling station and if they have the correct ID.

"So even if you go during high-volume traffic periods, if you have those pieces with you - the voter information card and the authorized ID, you'll still get processed faster than if you went without."

Some of its key features include:

• Where you vote – unlike provincial or municipal elections, you have to vote on election day and on advanced voting days at a designated place determined by where you live.

• Accessibility – the cards outline the level of accessibility at the polling station you've been assigned to. If your designated voting place doesn't meet your needs, contact Elections Canada to be assigned to a spot that can better accommodate you.

• Time – thanks to the rise of social media making it easier for results to be communicated across the country before all the polls closed, voting times have become staggered. In B.C., polling stations are open for 12 hours between 7 a.m. and 7 p.m. on election day.

If any information on your voter information card is incorrect or you didn't get one, head down to the Elections Canada office, call 1-800-463-6868 or visit the website (elections.ca) to ensure you're registered and that your address is correct by Oct. 13 to get a card.

After that date, you can still register to vote in person when you visit the polling station.

Even though general voting day is Oct. 19, voters can mark their ballots anytime between now and 7 p.m. on election day.

Grant said special ballot voting has been available since the election writ dropped Aug. 2 and advanced voting takes place over the Thanksgiving weekend.

"It was slow to start with but I would say since then there have been people in each day to take that opportunity of filling out a ballot," said Grant, who has been the returning officer in Prince George since 2005.

Special ballot voting is open to anyone who is eligible to vote, regardless of in which riding they are registered, provided they have the appropriate identification. The ballot can be filled out on site or brought home and returned no later than 6 p.m. on election day.

Unlike the ballots provided during advanced voting days or election day, there are no names to select from on special ballots and voters must write in the name of their preferred candidate.

The easiest way to use this method is to head down to the returning office at 2005 Redwood St. (Cariboo-Prince George) or the Parkhill Centre, 556 North Nechako Rd. (Prince George-Peace River-Northern Rockies), and request a special ballot voting kit. Elections Canada offices are open seven days per week.

There's a lot of information available to voters about the process this year; Sitek likened it to "drinking from a fire hose."

But the flow of information can be easily managed if people give themselves enough time to sort things out.

A variety of organizations also have programs aimed at educating voters about the process.

The provincial branch of the Canadian Federation of Students is behind the new initiative aimed at getting 10,000 students to cast ballots for the first time.

"We're really trying to push for people to vote in the advanced polls just because they're a lot more forgiving than when you show up on election day and you don't have the right piece of ID or the lineup's too long or a number of things can go wrong on election day," said CFS-BC spokesperson Jenelle Davies about the focus on information.

"Because there's a lot of confusion about the new election rules with the Fair Elections Act that went through. So we're just trying to make sure people are informed as possible."