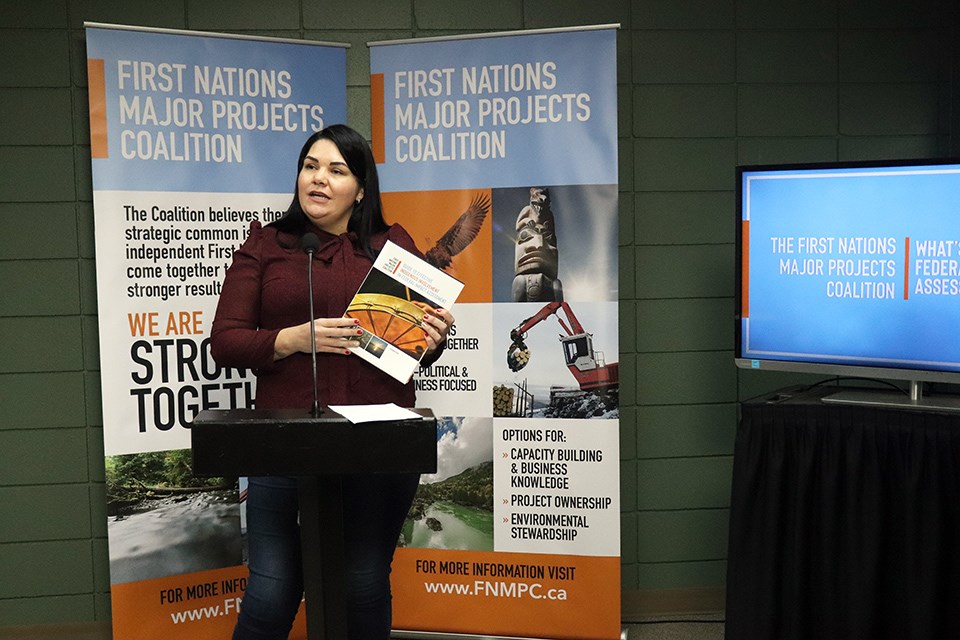 FNMPC Director of Operations Angel Ransom speaks about the new guide and videos at the announcement in Prince George. (via Hanna Petersen, PrinceGeorgeMatters)

Indigenous Nations across Canada now have a tool-kit to help them get involved as key players in major project development in their territories.

The caucus of the First Nations Major Projects Coalition (FNMPC) announced the release of a technical guide together with a complementary eight-part video series designed to enhance the capacity of Indigenous Nations to effectively engage in the new federal impact assessment (IA) process.

These are a first-of-their-kind resource available to all Indigenous communities across the country.

The intention is to support Indigenous communities as key players, rather than mere participants, in the IA process and gain a greater degree of control when major projects are proposed within a Nation’s traditional territories.

“We have heard loud and clear that it is not so much that [Indigenous communities] are opposed to development, it’s about the idea of doing things in a better way to ensure there is a sustainable environment, that the social wellbeing of their communities is intact, and that they are involved as partners instead of mere stakeholders,” explains Angel Ransom, Director of Operations for FNMPC, in Prince George today (Oct. 28).

“We have worked with our communities to understand the issues, concerns and gaps in these regulatory processes and in creating tools that fill those gaps.”

Ransom says The Guide to Effective Indigenous Involvement in Federal Impact Assessment is a basic how-to guide for Indigenous Nations to get involved in the IA process and make decisions with certainty.

“It’s a comprehensive look at environmental impacts, social impacts, cultural impacts as well as the economic benefits of a major project,” says Ransom.

“Our members have been asking for some time for tools to better understand and participate in this process. Quite often that is where the hindrance occurs that lack of understanding, timing and capacity.”

FNMPC was created about five years ago by 13 northern B.C. First Nations in response to major project interest in their territories, and has since grown to include cross-Canada membership.

“Where it originally came from was First Nations wanting to seek equity as a fair partner in a project under a business approach,” says Ransom, explaining FNMPC is an information conduit to support First Nations in making informed decisions.

“We formed this organization because there is no other organization like this anywhere else in Canada that addressed this specific need.”

“We have made an eight-part complimentary video series as well because we realized not everybody has the time or interest to read through a very complex and technical document,” says Ransom.

“They are about two-to-four minute segments and those are guided for Indigenous community audiences but is also beneficial for industry, government and external parties to take a look at and try to put themselves in Indigenous communities’ shoes.”

Ransom says the release of these new, publicly available tools is the beginning of a longer process.

“That is going to be taking this guide and putting it into action because we realize there needs to be an understanding of what does this guide mean and how is it going to help us, and how is it beneficial to industry, First Nations and government,” says Ransom.

“The next step of our work is doing training programs to help create that understanding and ensure that these tools are being used in a good way at the end of the day.”

The technical guide and the complimentary videos are available on the FNMPC website.