New citizen takes stand against swearing allegiance to the Queen

Srabon Salim loves Canada. The Queen? Not so much. Immediately after taking the oath during a citizenship ceremony in Prince George on Friday, he presented a letter to the judge announcing he has disavowed his pledge of allegiance to the Queen.
May 2, 2016 3:51 PM By: Mark Nielsen 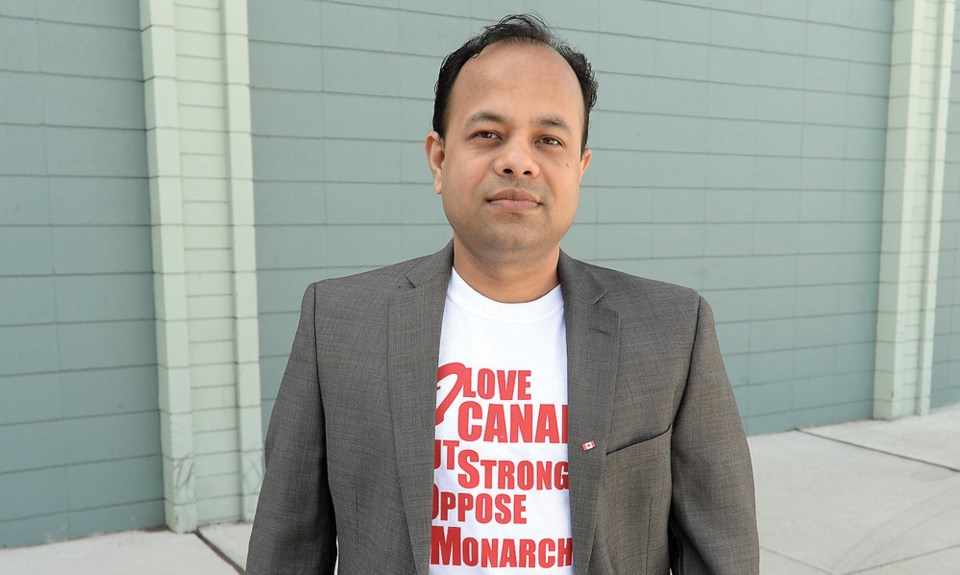 Srabon Salim disavowed the oath to the Queen at the end of Canadian citizenship ceremony Friday at the John McInnis Centre.Citizen photo by Brent Braaten

Srabon Salim loves Canada. The Queen? Not so much.

Immediately after taking the oath during a citizenship ceremony in Prince George on Friday, he presented a letter to the judge announcing he has disavowed his pledge of allegiance to the Queen.

"My core values can't accept the medieval idea of monarchy in 2016 as it creates social divisions and hereditary hierarchy in social privileges," Salim says in the letter, which he also sent to John McCallum, the Minister of Immigration, Refugees and Citizenship. "I highly regard that every child's birth is royal for every parent. It is hard for me to regard someone as 'royal' simply because he/she was born in a so-called 'royal' family. I like to look at my three little boys with a high pride of self esteem that they are socially equal to any other member in this Canadian society."

A mechanical engineer at Canfor Pulp, Salim, 38, grew up in Bangladesh but has also lived in Saudi Arabia, Japan, Australia, the Philippines, the Netherlands and even England before he and his wife, Samia, 32, decided Canada is where they want to settle down.

It was while studying for the citizenship test that he learned he would have to swear allegiance to the Queen.

"We had been looking forward to staying in this country and then this pledge thing," Salim said in an interview. "It was actually bothering me...I thought that I have to do something about this."

There was a time when the monarchy actually had power but is now seen almost exclusively as a figurehead whose primary job is to cut ribbons and wave to the public. The Royals are also a major tourism draw for the United Kingdom.

However, there have been occasions where Queen's representative in Canada, the Governor General, has had to make substantive decisions. For example, in 2009 Michaëlle Jean prorogued parliament in response the Opposition's notice it intended to defeat the Conservative minority government in a motion of non-confidence just six weeks after the federal election.

That said, the Prime Minister appoints the Governor General, not the Queen.

Salim isn't the only one who questions whether allegiance to the Queen is appropriate. In Australia, in particular, the issue of whether to declare itself a republic and cut all ties to the royal family bubbles up every once in awhile.

It's an idea Salim supports.

"Canada also should be a republic," Salim said. "It should be a country to set an example."

Because Salim waited until after the ceremony to disavow the Queen, he is free and clear of any possibility of being deported or exiled as a result.

"Once a person takes the oath of citizenship at a ceremony, they become a Canadian citizen and receive a certificate of citizenship," Ministry spokesman Remi Lariviere said in an e-mail. "If this person subsequently exercises their right to freedom of expression to disavow their oath, the disavowal has no legal impact on the oath-taking under the Citizenship Act. Therefore, the person's status as a Canadian citizen is unaffected."

Samia hasn't taken the oath yet and Salim said he does not want to influence her decision on whether to follow his footsteps. "It's her choice," he said.

Salim likes the Queen as a person and was glad to see her celebrate her 90th birthday recently.

But that was still not enough for Salim to overcome his misgivings.